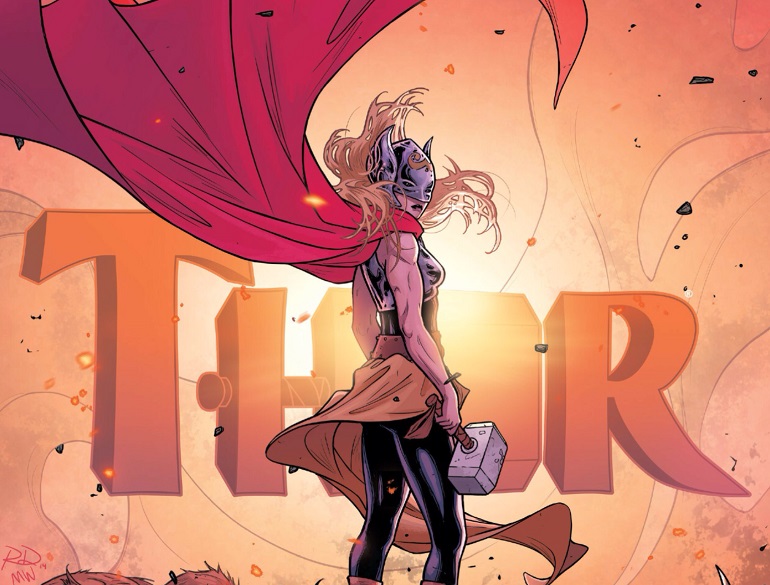 The date is October 1, 2014. The book is Thor #1. The writer is Jason Aaron and the artist is Russell Dauterman.

The Internet is on fire.

Since the announcement that the next person to pick up Mjolnir would be a woman, there have been individuals in certain corners of the Internet (and the physical world, probably, whatever that is) that have been in full-on rage and panic mode. Flash forward to February 2015, and some people still can’t let it go, talking like the sky is falling. All they’ve ever loved has been undone by this woman with a hammer.

We think this is utter rubbish, to put it politely. So, the great brains at Comicosity have whipped up this fancy list of reasons why you must be reading Thor. As you’ll see below, the sky is far from falling. There’s just a new kickass Goddess of Thunder unleashing justice on her foes up there. *SPOILERS AHEAD*

1. This wasn’t a PR stunt. It’s about the characters. 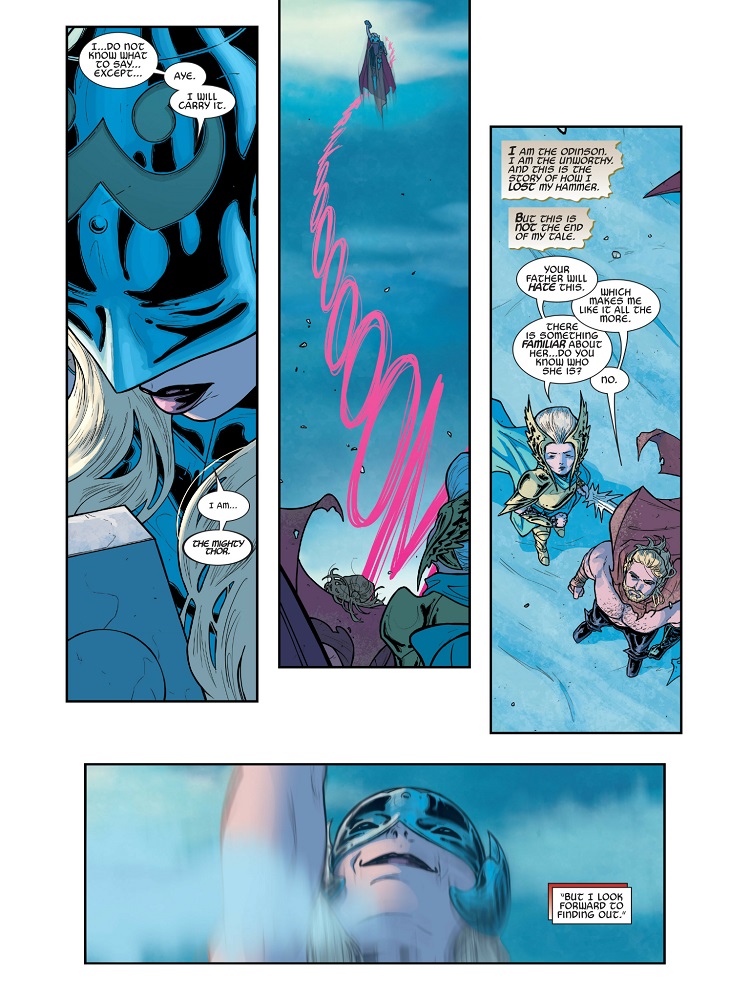 Jessica Boyd: What makes the current run of THOR so great is more than just the fact that it naturally grew out of Jason Aaron’s storyline initially laid out in Thor: God of Thunder.

What makes it great is more than just the fact that Aaron said he went to Marvel with the idea to make Thor a woman, not them asking him to make this change. What makes Thor great is that Odinson’s storyline is so intrinsically intertwined with Thor. At no point is Odinson going off and having his own adventures. Every conversation he has — every thing he does — revolves around her, and he is her biggest cheerleader. He is the one schooling the rest of Asgard on the fact that she is the worthy one and therefore is Thor.

Alison Baker: We’re how many issues into the new run, and we still don’t know her secret identity, but it doesn’t really matter. The point is, she’s WORTHY.

Thor is Thor. Gender identity doesn’t matter. There was a time long ago (that Jason Aaron highlighted so well in the God of Thunder run) when Thor Odinson had no hammer because he’d yet to prove his worthiness. That was the entire plot of the first movie. Thor was Thor, but not really, until he was worthy. So if worthiness is the deciding factor what does it matter what’s in Thor’s trousers? 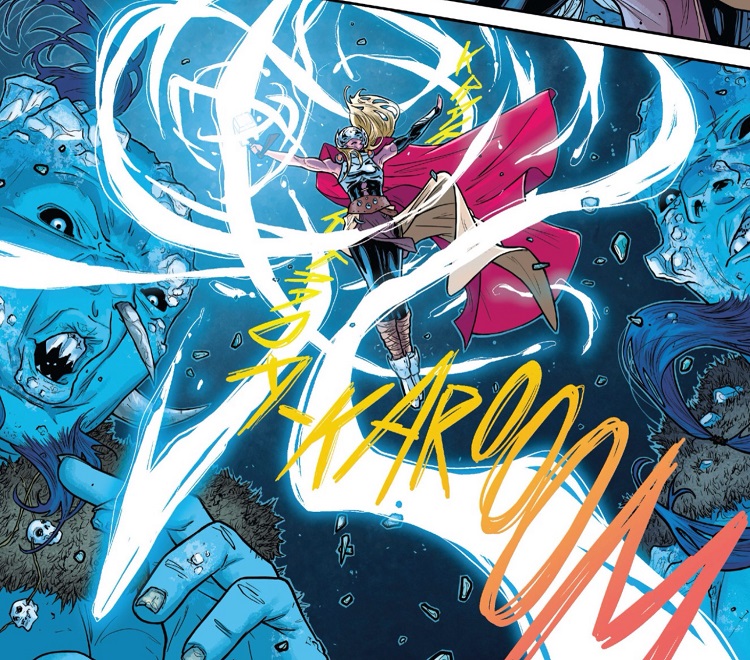 Heather Joy: I love this Thor run. Not just because she’s a bad-ass blonde chick and it’s completely transcendent in the way of feminism, but because it’s interesting. Thor has been the same cookie cutter character for decades and, finally, we’ve got some spice. This shakes things up in a big way and widens the demographic, drawing more people to an old book. Thor? A woman?! Say whaaaaaat? Who doesn’t want to read that and see what that’s about?

4. Dauterman kills it on art. 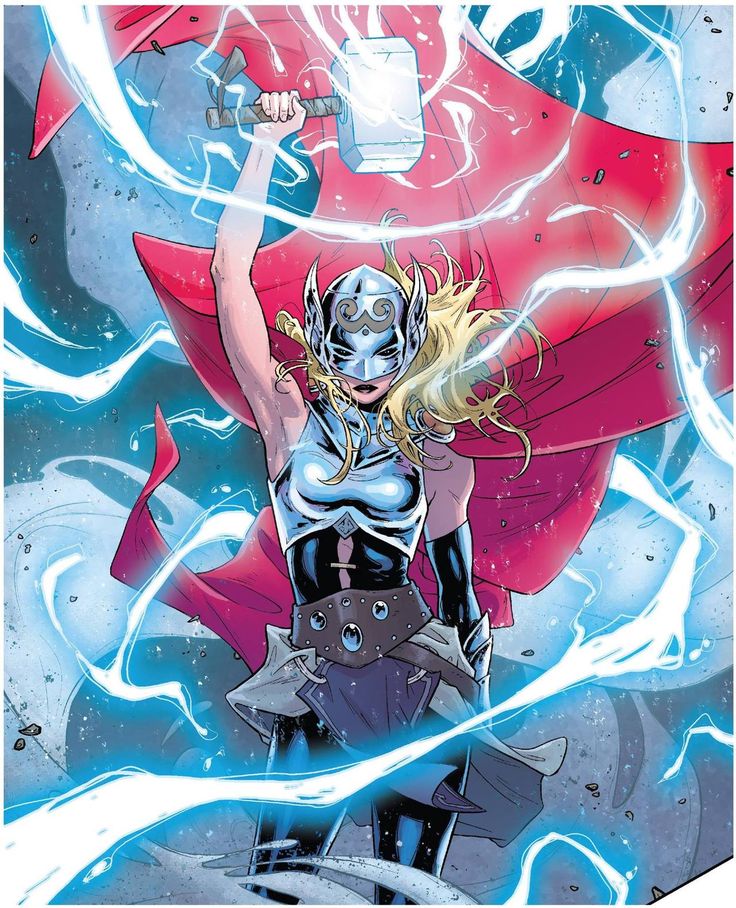 John Ernenputsch: Who is Thor? Jason Aaron has seamlessly crafted a story with a central mystery that has the comic book world talking. It isn’t a publicity stunt, but what looks to be a well thought out story that has been in the works for the past few years. Why this woman? Why was Odinson deemed unworthy? All questions that Jason Aaron will answer. All we’ve seen is the beginning of the journey and we should sit back and allow/enjoy a master of his craft to tell his story. 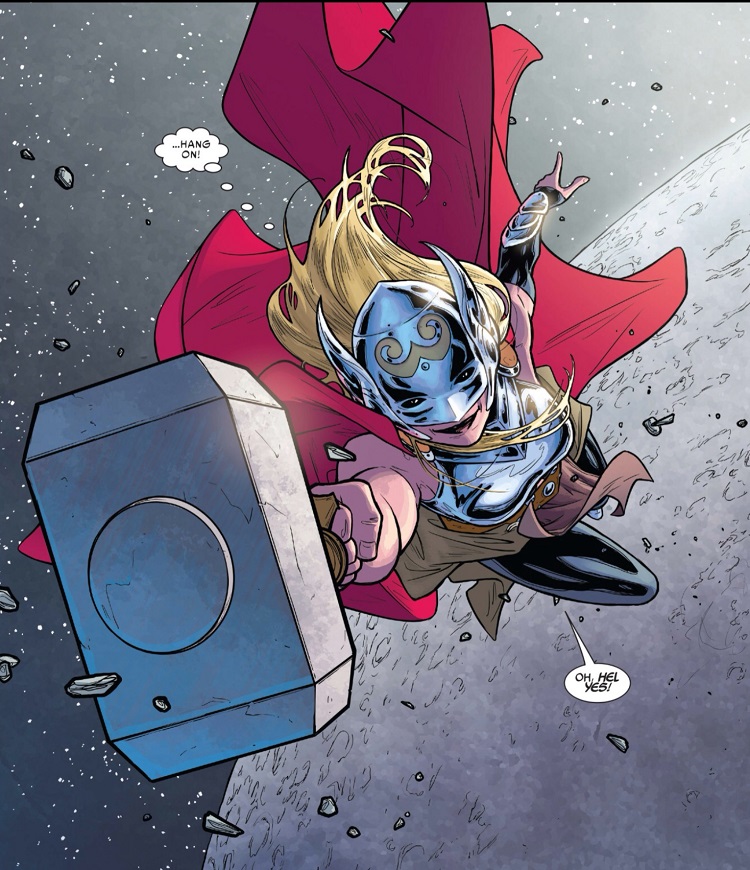 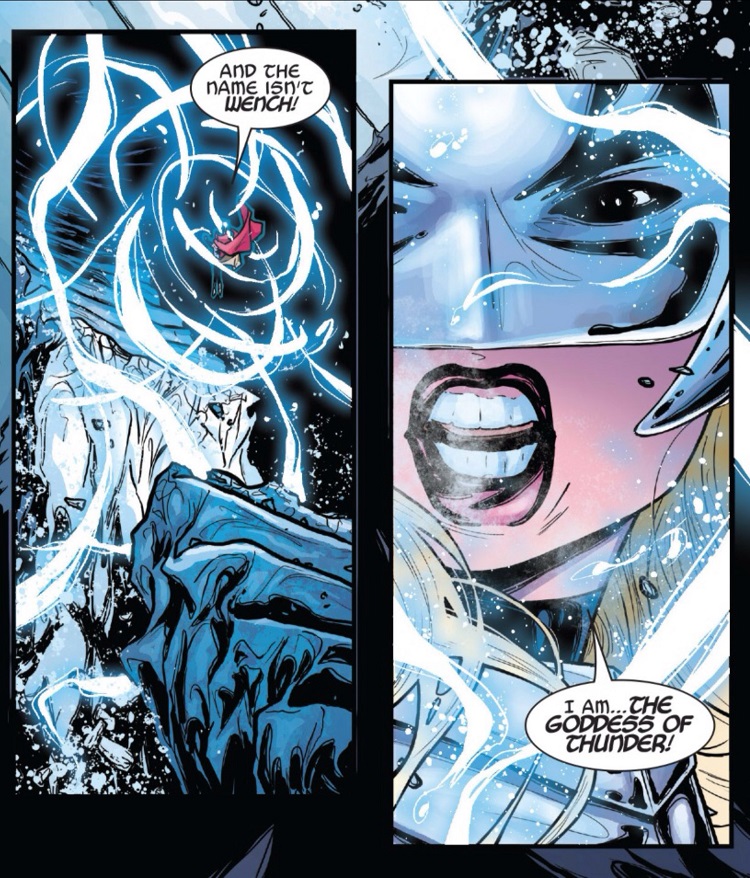 Scott Berry: The question shouldn’t be why should Thor be a woman, rather why can’t she be a woman? Thor is metal as f*** and she has no f***s to give, so it seems like she’s a pretty good Thor to me.

8. Marvel’s “trinity” has joined this century. 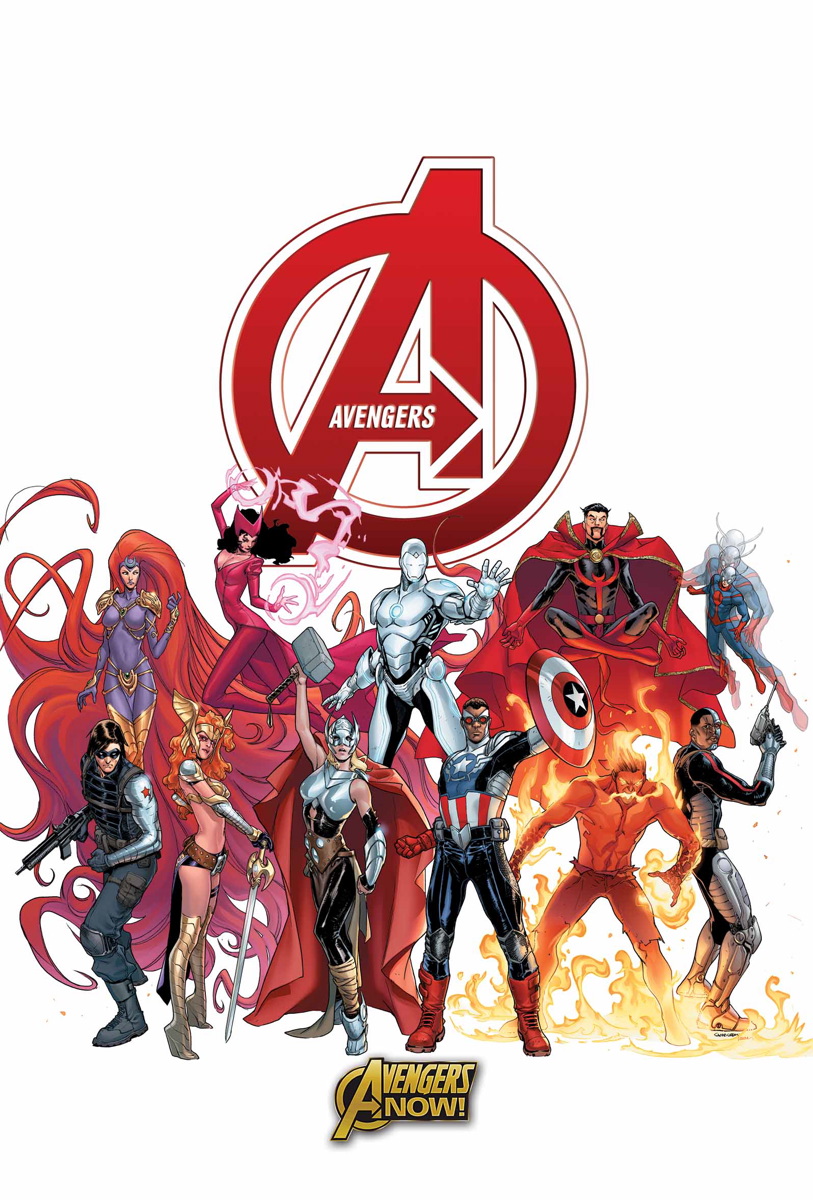 Aaron Long: Three straight white guys anchoring your publishing line isn’t going to fly anymore. It doesn’t represent the diversity of reality or the diversity of readership. The new Thor, Sam Wilson as Captain America, and Iron Man (let’s have Tony come out as gay while we’re at it) is a trio you can build your line around that is reflective of the diversity of the real world and one hell of a lot more interesting to boot. 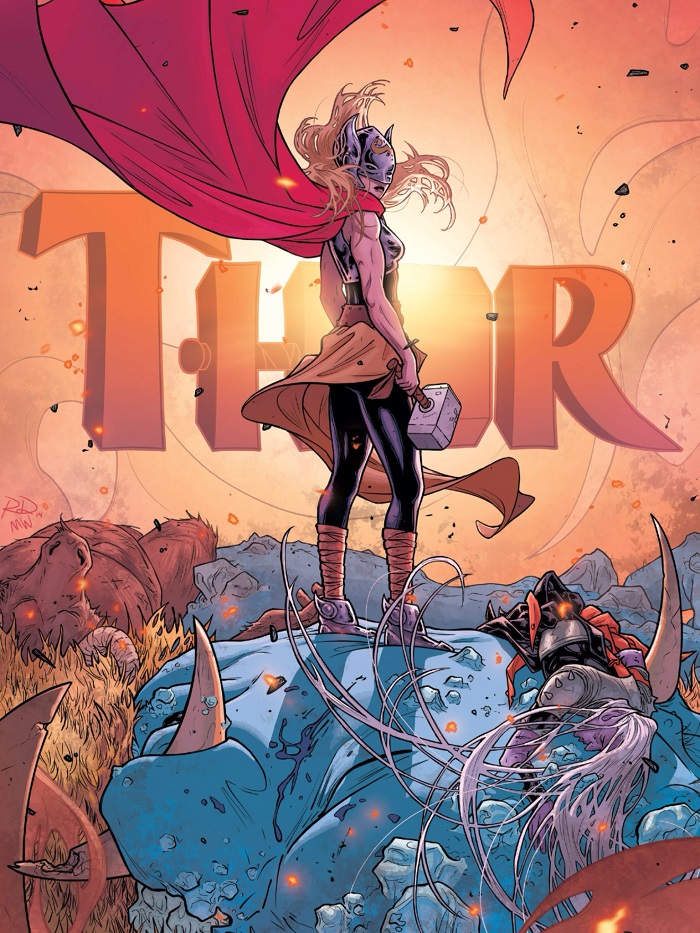 Alison Baker: She gets to use her gender to take advantage of the idiots who underestimate her, be they Midgardian super-thugs or Jotun frost giants. Only an idiot would see that helm and that hammer and think “oh, she’s weak sauce, I’ll take her out.”

John Ernenputsch: Bad-Ass. I’ve used those two words way too many times. There’s a reason, and it’s because whether or not it’s a man or a woman with the hammer, Jason Aaron’s Thor is BAD ASS.

10. The hammer knows more than the haters.

Draven Katayama: The few online who are critical of Thor’s gender are not making any valid criticism of a comic for its writing or art. They are parroting ideology that is so out of touch with reality as to be laughable. Representation — in comics or in any media — is not just about reflecting what ought to be, but what already is. Jason Aaron’s Thor accomplishes both.