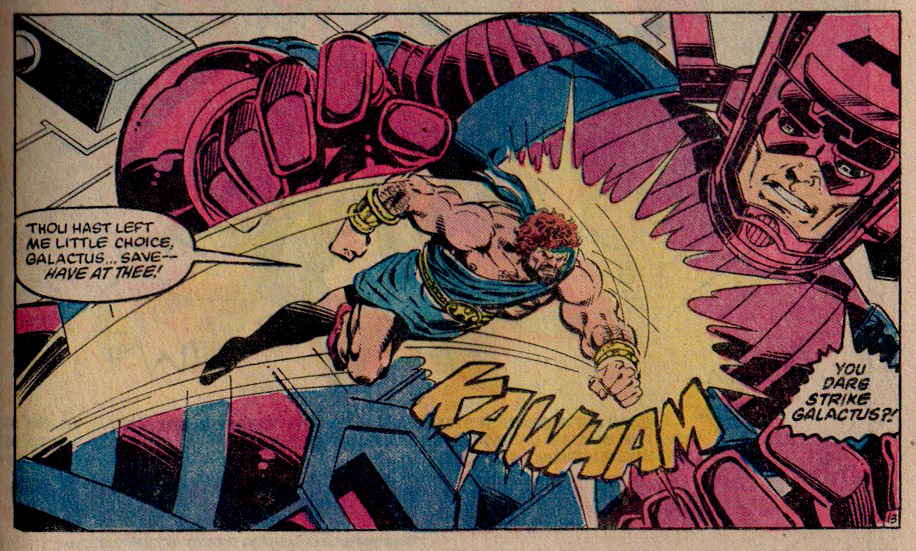 When Aaron Long and John Ernenputsch started the 52 in 52, as I understand it, the intent was to dig into the Marvel Unlimited offerings a bit. So I figured for one of my reads, I’d take a look at a Marvel mini that I’ve never read, but can easily find – the1982 Bob Layton-written and drawn Hercules: Prince of Power miniseries. It’s four parts, originally priced at 60 cents (American) each. It can be found in several print collections, as well as most bargain bins at brick-and-mortar stores, but so far it is NOT on Marvel Unlimited or Comixology. At least not yet. My review is of the four issues in floppy format, but the listing below is for the collection. 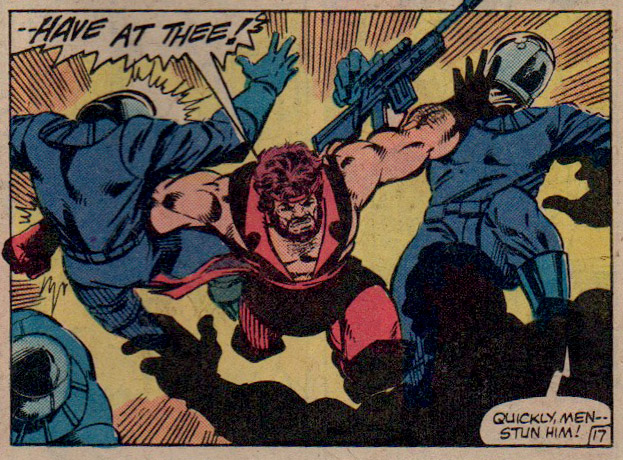 That’s what writer/penciler/inker Bob Layton gives us in Hercules: Prince of Power from Marvel Comics. Why? Because absolutely no one asked for it and why not have a demigod most known for his earthly adventures be cast into the final frontier?

Putting Hercules in space gives Layton plenty of room to riff, try out new things, and not be required to include anything other than what Layton wants to include. Which, in this case, is a lot of interstellar exploration, some laughs, and a race of aliens who serve as a precursor to Jar Jar Binks. Except they’re snails. 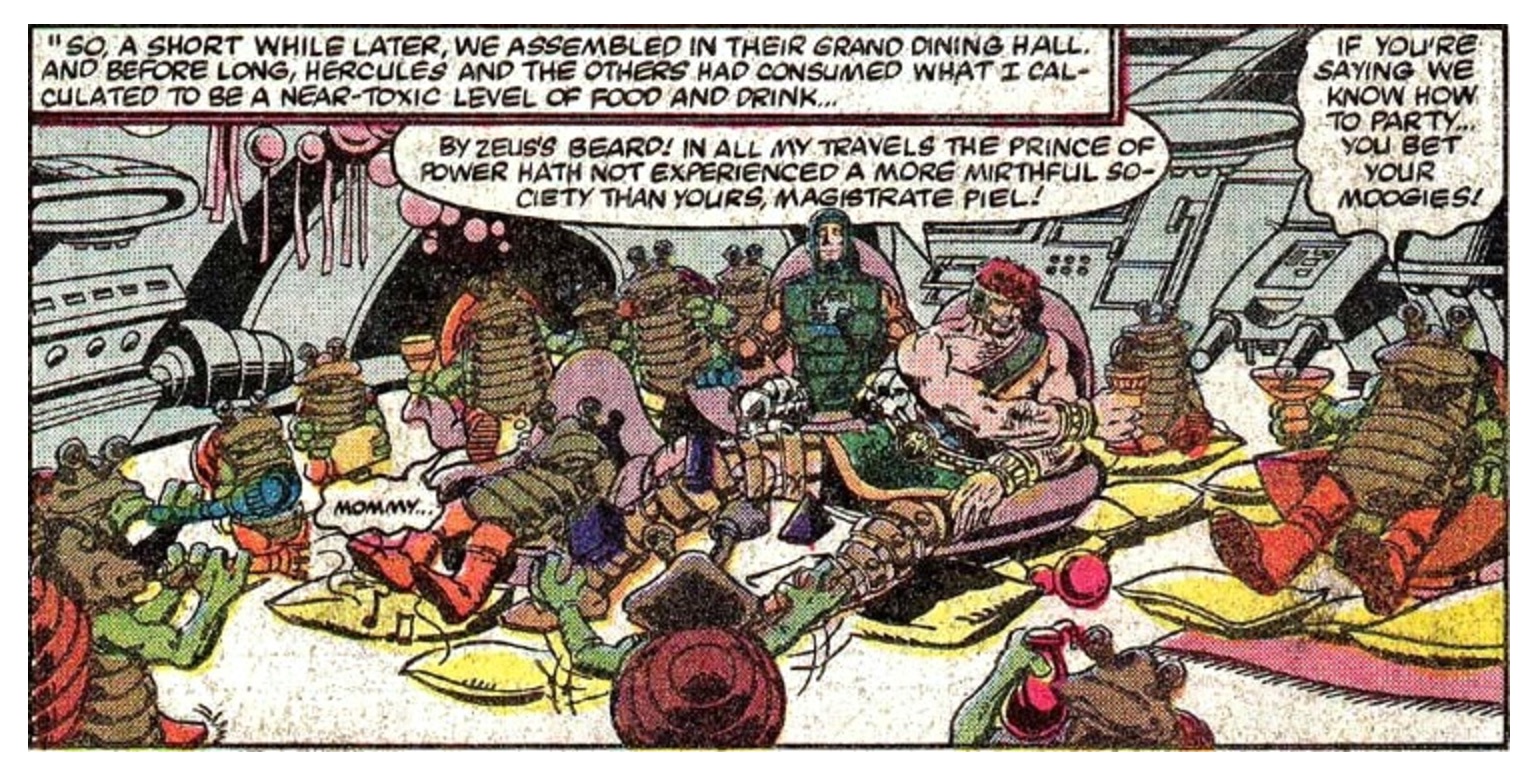 Anything and anyone else appears, presumably, because Layton wanted them to. Like Galactus. Yes, Hercules fights Galactus and it goes about the way you’d think. Sort of. Except there is a lot more to this series before and after that point. And it winds up being a lot of fun.

Rick Parker joins Layton to letter the book and Christie Scheele handles the colors. Along the way Luke McDonnell and Bob De La Rosa are credited for assists, and the pair work seamlessly within Layton’s tale as to not tip the hand to reveal their contributions. Overall, the book looks great. I’m certain it would look better in a cleaned up digital version, but for a thirty-five-year-old tale, it captures the time nicely while still feeling relevant. Layton does rely on the captions and the dialog for describing the goings on a bit too much for my preference, but it’s not in a distracting or detracting manner. There’s still plenty of action in the story itself, including every time Hercules gets ready to throw down with his signature, “HAVE AT THEE!” bellow. 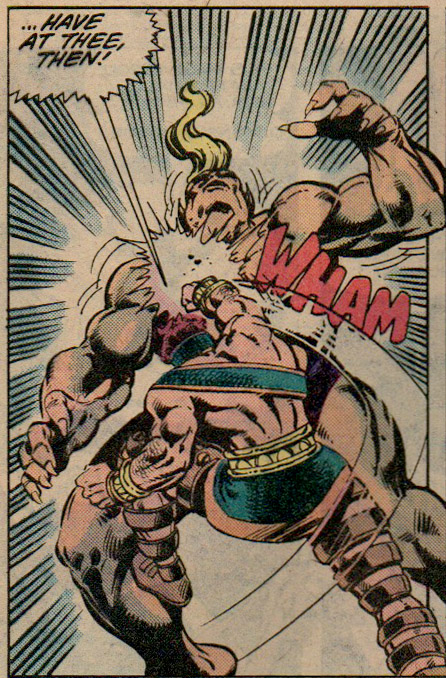 I met Hercules (at least the Marvel version) in the pages of Peter Parker, the Spectacular Spider-Man #17 in 1976 (Yeah. I’m old.), but that was a brief cameo that alluded to Herc’s time with the Champions, rather than anything more illustrious. Greater depth of familiarity with the scion of Olympus came through the pages of the Avengers, specifically the Roger Stern-penned era. In that span, Herc was quick with his fists, but even more quick to help an opponent up, regale the battle just fought, and hoist a pint. Years later, as he was working on Mighty Avengers, Dan Slott would refer to Hercules as “drunk Thor” with regards to his approach for writing the character, and that’s pretty well stuck with me since.

Given the Lion of Olympus’ inclusion in the current Avengers series (by Mark Waid and Mike Del Mundo – it’s excellent. Seriously. Check it out if you haven’t yet!) this seemed like a good time to finally get around to Bob Layton’s Hercules tale. For a thirty-five-year-old comic book story, Hercules: Prince of Power holds up quite nicely. It’s not going to be the comic book story you regale all of your comic reading friends with, but it certainly is a nice, entertaining, unburdened read. Grab a pint of mead (or whatever makes you happy), find a copy of this book, and enjoy a good, fun comic book tale.