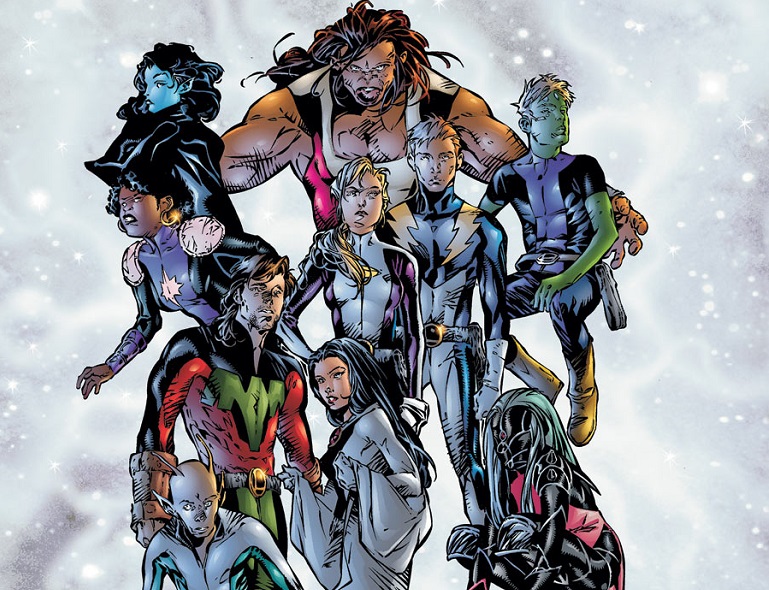 When Aaron decided to bring back the “52 In 52” column, and switch up the format to include three other contributors to lighten the load, I was excited. Those of you that were here for the first go around may have noticed my name at the end of most installments. I received a special thanks most weeks because I was the one curating what Aaron would read. Now that I’m writing an entry once a month I thought I’d begin by explaining my thought process in choosing stories, because I will be using the same reasoning in choosing what I will personally cover in this space over the next twelve months.

First, each story I read will be one that I have never read before. This is really the only hardfast rule the first time around, and it continues to be this time. Second, I will be trying to hit blindspots in my comic book reading. While this may sound exactly the same as the first rule it’s a bit different. I haven’t read every X-Men comic ever published, but I have read thousands and thus will try to stay away from the property in favor of characters I’m not as familiar with. Third, I want each installment to have some connection to the current comic book and/or pop culture landscape. The connection can be through what the creators are currently doing, or the use of specific characters in movies, TV shows, and of course current comics. Each month I will choose a story that fulfills at least one of these rules, and hopefully more than one as much as possible. This week’s column actually covers all three, and made for a perfect first “52 In 52” for me. 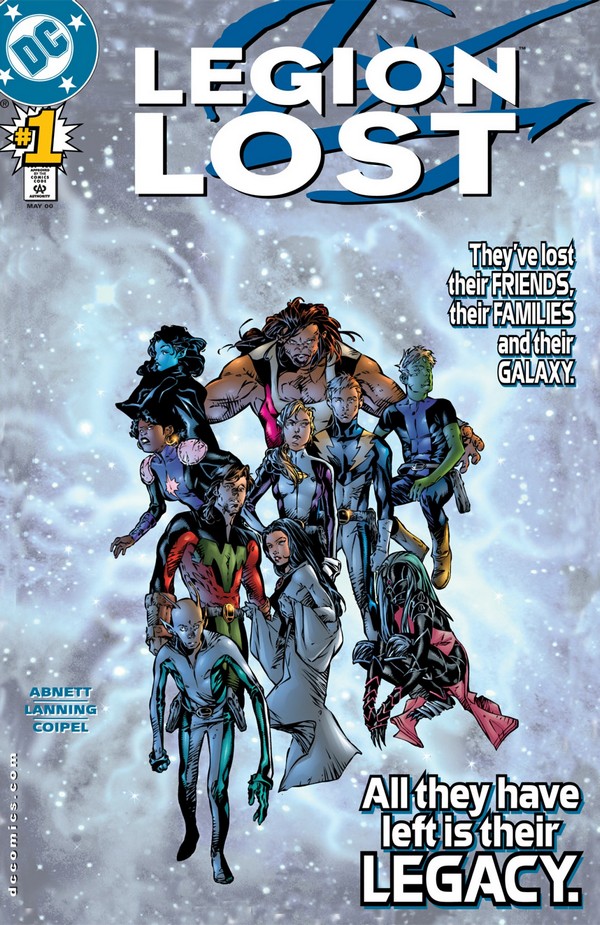 This week I will be discussing Legion Lost from DC Comics. This series that ran from 2000-2001 isn’t to be confused with the 2011 New 52 series of the same name. I have never read the twelve issue maxiseries before, and while familiar with The Legion Of Superheroes most of what I know about them comes through research when they’d show up in comics I was reading (Geoff Johns’ Action Comics, and the JLA/JSA Lightning Saga crossover are two that immediately come to mind). If you read superhero comics from the Big 2 the series’ connections to today’s comic landscape should be obvious. One of DC Rebirth’s big mysteries has been the mysterious Legionarie (Saturn Girl?) that showed up in DC Universe Rebirth and a recent issue of Batman. Dan Abnett is currently writing Aquaman, Titans, and Earth 2 Society. Then artist Olivier Coipel has developed into an A-list superstar having worked on some of the biggest Marvel comics over the past decade plus. Being able to check off all these boxes had this series make more sense then something like the classic story The Great Darkness Saga, or Waid’s “Threeboot” series from the mid 00s. That’s not to say I won’t get to those stories later.

Legion Lost is a twelve issue series that ran from March 2000 through February 2001. From the outset it was marketed as a jumping on point for The Legion Of Superheroes, and would end up leading directly into the launch of a new series titled The Legion in late 2001. Despite picking up immediately after the events of Legion Of Superheroes #125 the creative team of Abnett, Lanning, Coipel, Alixe, and McCraw do an admirable job of making the series as new reader friendly as possible without alienating long time readers. With a property as notorious as the Legion is for being impenetrable I felt it was important to lead with this. Even with a few instances of referencing what came before, the nature of the plot and structure of each issue strip the characters down, and allow for new readers to get to know the characters.

The series begins with a new character named Shikari on the run from the antagonists of the series, the Progeny, when she comes across the Legion ship that was lost in a spacetime rift in the afformentioned LoSH #125. Shikari serves as a stand-in for new readers, and her coming across a hologram of Element Lad serves as an introduction to the concept of The Legion. Eventually the rest of the team wakes up from a long slumber and their journey begins. This journey finds the team as far from home as can possibly be imagined. Not only does this put the team of Apparition, Brainiac 5.1, Chameleon, Kid Quantum, Live Wire, Monstress, Saturn Girl, Ultra Boy, Umbra, and later Wildfire in great peril, it also allows for Abnett and Lanning to separate the characters from events and supporting characters from their previous series, and explore them in more depth.

The structure of the series helps a lot in this case. Each issue up until the final one features a focus on a different character. The cover of each issue shows readers which character will receive the focus that month, and that character is explored in depth with the use of thought/narration boxes. This was a fun aspect that DnA played with throughout the run. Very rarely was the narration just standard. For example, issue #5 focused on Brainiac 5.1 and the narration was set up as him leaving “Self Notes” and issue #3’s Kid Quantum narration was in the form of a conversation with the crystal that Element Lad uploaded his hologram to. This was a clever way that allowed new readers to get to know each of these characters more than they would have otherwise. 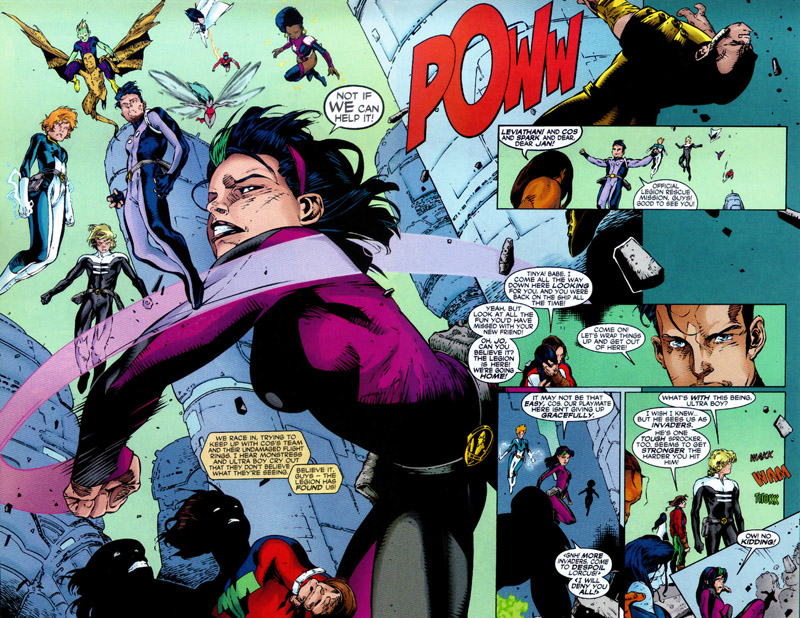 Legion Lost is primarily a character study, and that means a fairly basic plot that serves the character development. The Legion need to find their way home against impossible odds, and run into an evil alien race that wants to keep them from doing so. That’s essentially the story for the entire twelve issues.  The key to the series success, and why I ultimately ended up enjoying it, was the character interactions, major twists, and how they played off each other. The stress on Saturn Girl to be a good leader and how far she goes to be one,  Brainiac 5.1 being embarrassed for not being able to use his “12th Level Intellect” to find away home, Umbra’s sense of fear, Live Wire’s relationship with Saturn Girl, and the Apparition/Ultra Boy relationship are explored in depth. Not only are they explored, but the consequences of these interactions drive are what drives the story forward.

The series is also reliant on big twists. Abnett and Lanning do a great job of planting the seed for these twists, and having them pay off big time a few issues later. These twists move the story forward, but like everything else in the series they are firmly rooted in the characters, and choices they’ve made. I won’t spoil anything, but the twists hold up well when you go back to check if they make sense, and also had me excited to read what comes next for the characters.

One of the big draws (pun intended) in choosing Legion Lost was the art of Olivier Coipel. Fans know him for his great work at Marvel on books like House Of M, Avengers, Siege, X-Men, and Thor. He has become one of the most iconic Thor artists, and recently returned to the character with The Unworthy Thor. It’s safe to say he is one of the best artists in the business, so it was interesting to see his work from sixteen, seventeen years ago. While they are glimpses of the artist he’d become, Coipel’s work isn’t close to the quality of work he produces today. That is to be expected, and it’s awesome to compare this series to his current work to see what has changed and where he has obviously improved over the years. I’m not sure Lanning’s inks do Coipel’s pencils any favors here, but to blame the art entirely on the inks is unfair. It’s fascinating to see just how much Coipel improved between this series and House Of M that came out five years later.

One thing hasn’t changed almost two decades, and that is the need for a fill in artist after a few issues. It was recently announced there’d be a fill in artist on The Unworthy Thor, and he only got through three issues of Legion Lost before Pascal Alixe came on board. Alixe would end up doing issues four, six, and nine. These days it would be hard for a fill in artist to live up to the work of Coipel, but seventeen years ago is a different story. Alixe’s art, while not as sharp as Coipel’s, isn’t the huge step down one would expect. 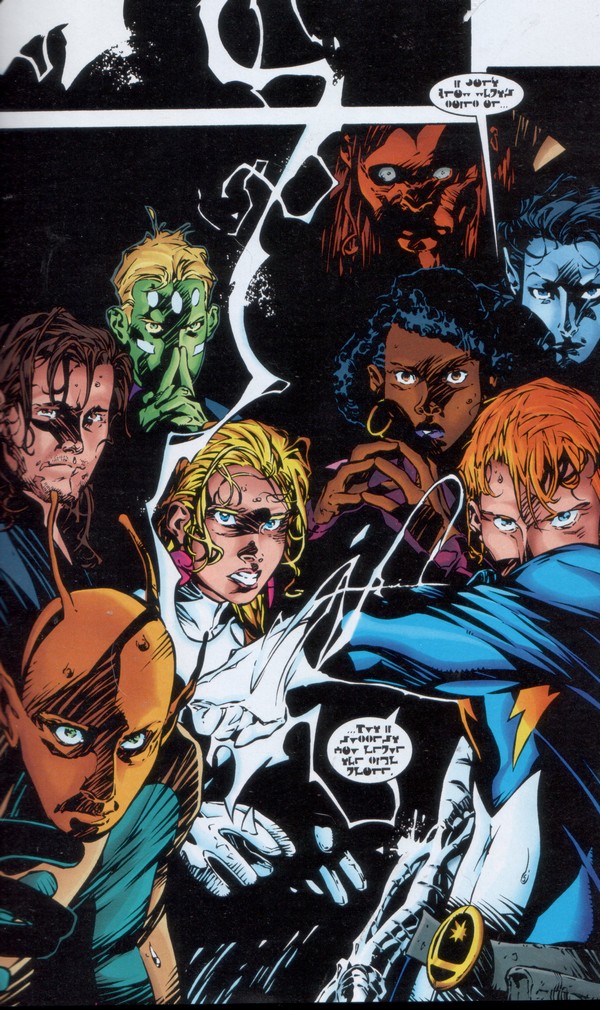 Overall, Legion Lost was a fun read that gave a lot of insight into the Post Zero Hour Legion Of Superheroes. While it’s not perfect in doing so, the series served as a solid jumping on point for new Legion readers seventeen years ago. It’s hard to fully recommend in 2017 though, because of all the changes the property has gone through in the years since. However, you could do worse if you wanted to get an idea of who these characters are. The best compliment I can give this series is that I do plan on reading what comes next for this iteration of the characters. That would the six issue Legion Worlds series that showed what was going on with The United Planets during the events of Legion Lost, and then a relaunched ongoing followed that. Hopefully whatever DC has planned for The Legion Of Superheroes this year does as good of a job as this series did in allowing new readers to get to know these characters.