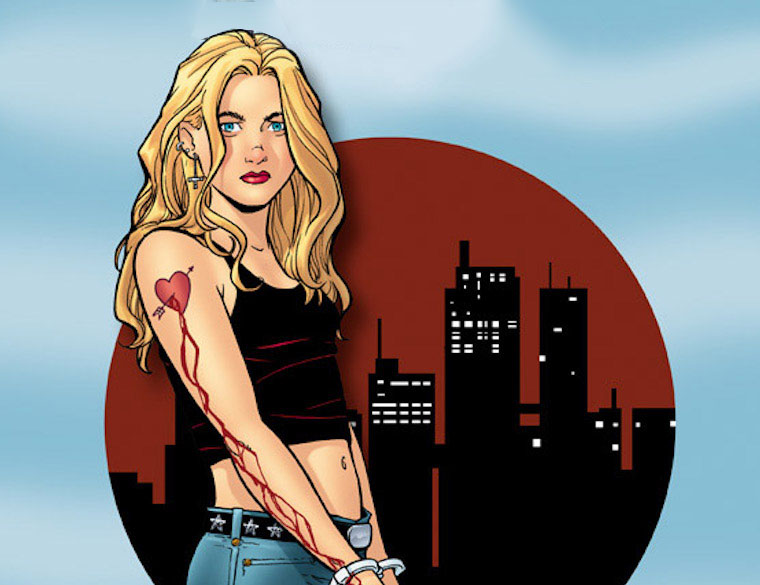 Hey y’all! Not sure if anybody will really know me, but hi, I’m Mexi and I’m a bit new to this place, first timer on 52 in 52. I was super excited when I was asked to join, and, gosh, I hope you guys like what I’ve got here.

I had recently read part of Terry Moore’s new series Motor Girl for a review here on Comicosity and been impressed. There was a point while reading in which I thought “Oh wow. I understand why this man has won awards”.

Strangers in Paradise is a multimedia experience that uses lyrics, in-universe paintings, poetry, short stories, and the comic itself to portray the relationship of its main characters, Katina “Katchoo” Choovanski and Francine “Francie” Peters.

Here are some of my thoughts on it. 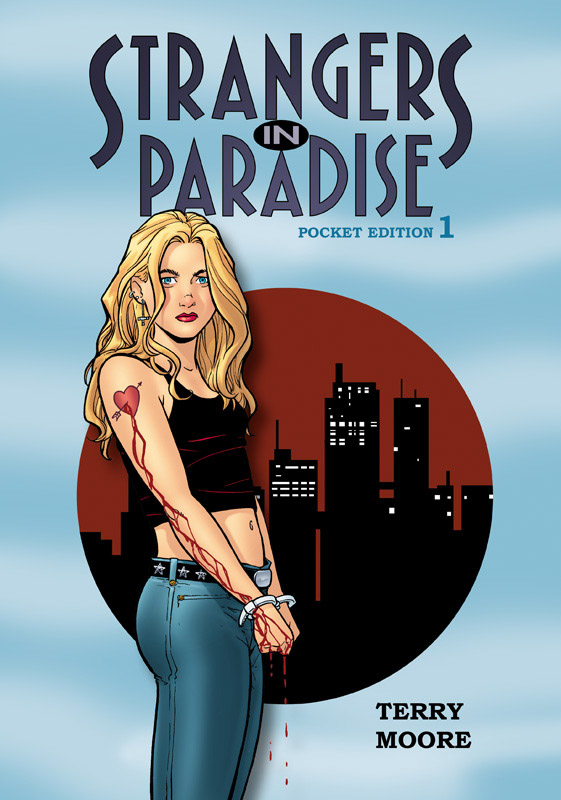 ***Consider this your SPOILER WARNING***

“My life is scribbling and scratching and half finished pages at dawn. If anything I’ve learned you can’t always go home…you can’t always be warm inside. That without love, we’re never more than Strangers in Paradise”.

The story begins with a monologue from a fictional play called Strangers in Paradise. These words reflect the relationship between Katchoo and Francie throughout the series.

They are more than best friends, yet can’t admit where they stand with each other. They are pulled towards each other like magnets, but due to troubled pasts and denial, they avoid the nature of their relationship, scared of what the other would think and terrified that their feelings can never be the same.

The story is not all slice of life romance, though. Katchoo’s past is dark and winding, due mostly to elements she herself has no power over. Part of why Strangers in Paradise is beautiful is because most of Katchoo’s past is not, at first, told upfront, but through hints. Through her art. Through Emma’s song. Through her dreams.

Katchoo feels like the main protagonist of the comic because of the emphasis on her past actions and her internal turmoil in this Pocket Edition. Those dreams especially are mesmerizing in their woebegone bedlam and melancholia. 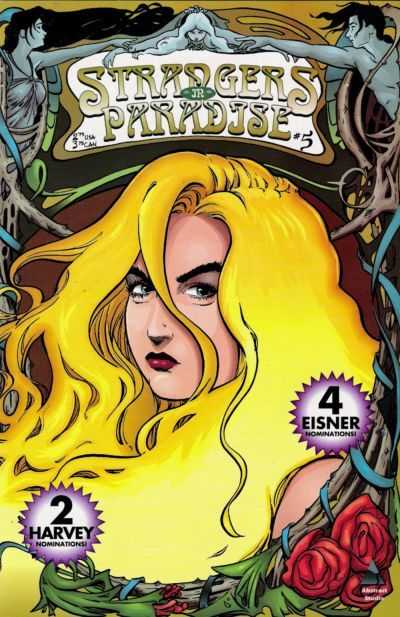 One dream in particular caught my eye. It begins with a glimpse of what could have been. The back of Katchoo, destined for paradise. Destined for heaven. Under her, a poem:

“Somewhere far away, the sky cries out in thunder.

And there’s nothing I can do.

So I wait. And I watch. And I feel his breath against my face.

His salt licks my skin, his promise brushes my hair.

His fury drives the wind to touch my cheek,

And whisper something I can’t hear.

An open ocean. A dastardly cliff. Clouds moves like curtains to reveal a never-ending sky. Bushes skirt along the edge of the view, the point of the cliff mere rock. A woman in a white dress. She reaches down for a something to throw.

Katchoo gazes at the goddess as she skips stones at the edge of the cliff. She walks towards her as if the woman’s presence pulls her. Yet her eyes tell another story. They know what is to come. They know what she will do, despite her conflicting feelings on the matter.

Katchoo stops near the woman. Asks if they are in Heaven. Vaguely reminisces about the past. After brief small talk, Katchoo can’t hold her feelings in any longer.

She embraces her mother figure, this woman who had never judged her. This person whom she lost. This woman she doesn’t want to leave.

The woman kisses her head.

“You have to, sweetheart. You have your whole life in front of you. Go. Enjoy it. It’s a gift from God.”

Katchoo yearns the peacefulness of death. Yet she chooses to live. For love. It makes her fall back into the Hawaiian jungles of her dreams. It makes the woman disappear.

I wouldn’t say Strangers in Paradise: Pocket Edition 1 is a perfect book. Some of the most common tropes, especially how glaringly terrible all the male characters are and some of Katchoo’s words at the beginning, might have been refreshing in the 90s, but now feel trite and sadly one dimensional in their message. The short story sections, while interesting, seem to drag on.

That said, it’s a wonderful book that grips the imagination. Katchoo’s art connects with the reader, has dimensions of sorrow that no one around her seems to understand. The mysteries of Katchoo’s past and how they catch up to her are worthwhile. Katchoo’s relationship with Francie feels like an oasis in a dessert, a paradise found by a wary traveler of terrible lands.

I recommend this book.