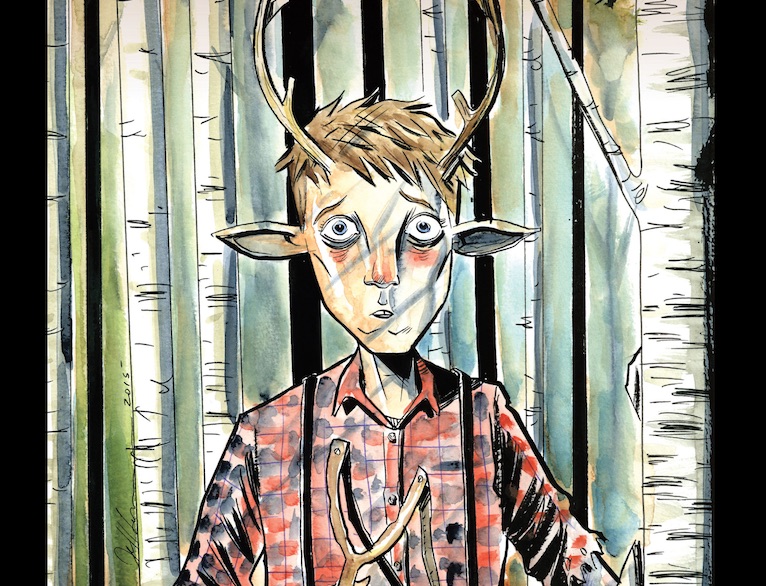 52 In 52 continues with one of Jeff Lemire’s earliest works, Sweet Tooth from Vertigo Comics. EiC Aaron is at the helm this week and well…don’t expect this column to be an uplifting affair, folks. Consider this your spoiler warning. 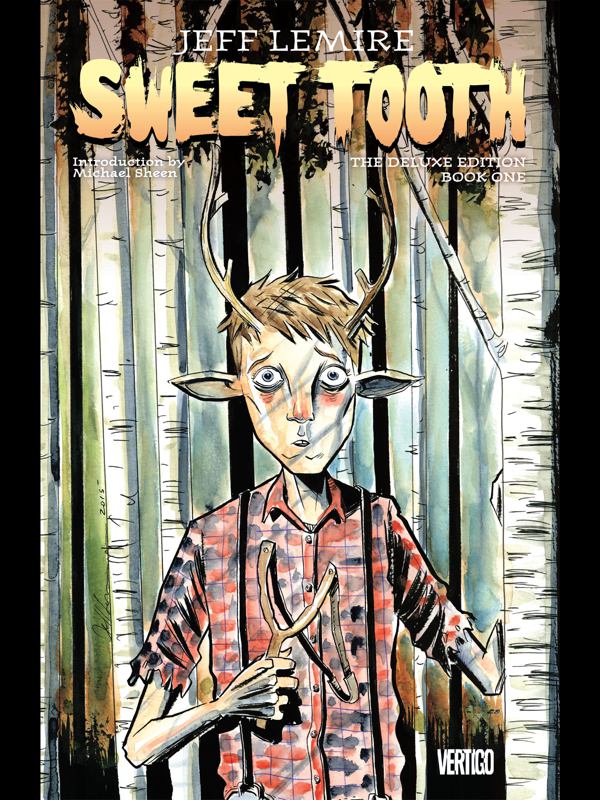 GUS: The main event, Gus is a deer/human hybrid who could potentially be the harbinger of the apocalypse. Raised in seclusion by his father, Gus is naive about the state of the world and how dangerous it is for his kind. Losing his father and meeting Jeppard changes the course of his life, to say the least.

JEPPARD: A pro hockey goon, Jeppard is seemingly too tough to die. His motivations with Gus are not clear for most of the collection, and his story is as gutting as any in this crushing tale.

The tone: Bleak as fuck.

The thoughts: I read this right before the Inauguration, and I couldn’t help but notice that the exceptionally bleak tone of this collection matched my mood. The world is a wasteland, people are dying from an unstoppable plague and to call the world desolate would be prettying up the situation. Gus is a charming character, his naïveté immediately making readers feel terrified for him in this world. He’s a walking question mark, an enigma that may have been the cause of the downfall of humanity…or is he just a kid who is part deer? The lack of answers provided by Lemire is absolutely perfect, as I was sucked into the despair as much as the riddle. We simply don’t know enough in this volume to make any conclusions, all we have is the soul crushing pain that Lemire has inflicted upon us.

Now, normally I don’t “go” for dark books. I’m not a horror fan. I don’t get a kick out of being sad. I generally like comics where good pulls out some sort of victory over evil and some kind of justice prevails. There is, so far, none of this in Sweet Tooth. Well, I shouldn’t say none. Jeppard and Gus do liberate a group of women from a horrifying situation in a town, but other than that….this is just a punch to the gut. The fact that I even kept reading is a testament to one thing and one thing only: Jeff Lemire is a great fucking storyteller. The pages after Gus was dropped off at the camp damn near pushed me away from this series, as I was completely freakin’ stressed, but Lemire’s storytelling had me hooked and I had to see where he took this. The mystery, despite the darkness, has my interest piqued. 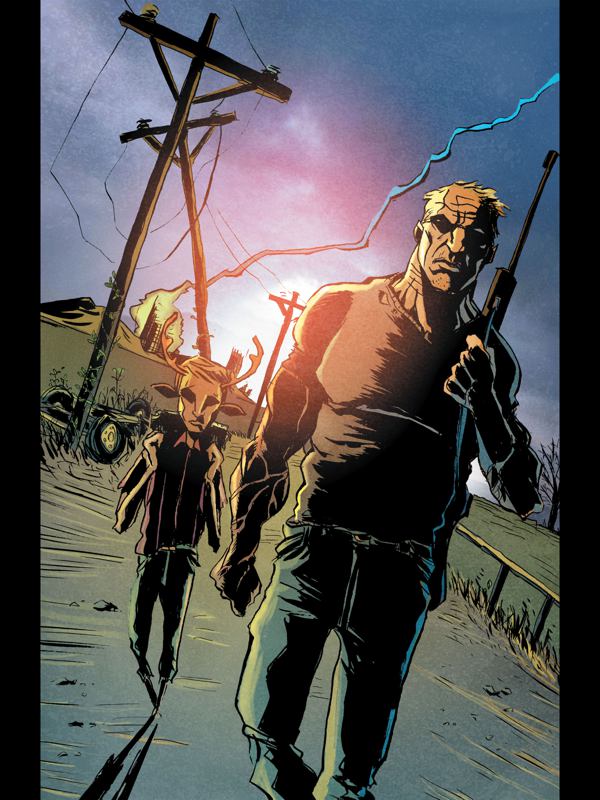 I’ve read some of his stuff before, both his written work at the Big Two and his cartoonist work with Underwater Welder and Trillium. I was especially impressed and engrossed with the latter pair, as Lemire’s work when he is penciling/painting and writing has an extra level of depth to it that few artists can capture. This collection is darker than Welder and Trillium, but you can very much see where his artistic style in those later works came from in Sweet Tooth. Every page is filled with work that is unmistakably “Lemire” and the hideousness of the characters is such a big part of this story. No one is pretty in this bleak world. The characters are as ugly on the outside as they are within, and even Gus, the most innocent character in the collection, is not a cutesy character to look at. Everything in society is broken and the visuals in this collection are so indicative of that. The mood invoked by these visuals is something that is hard to describe, it really is something to experience.

In closing, I have to say this was really goddamn hard to read (and write about) considering the state of world right now. The sad reality that kept kicking me in the face with Sweet Tooth is how it feels like we are on the slow march to hell right now as a world. This is a post-apocalyptic tale and it feels like the train toward the apocalypse is leaving the station. Lemire’s work is brilliant, I feel many who haven’t tried Sweet Tooth certainly should, but if you are looking for something uplifting…wait awhile before you open this cover.