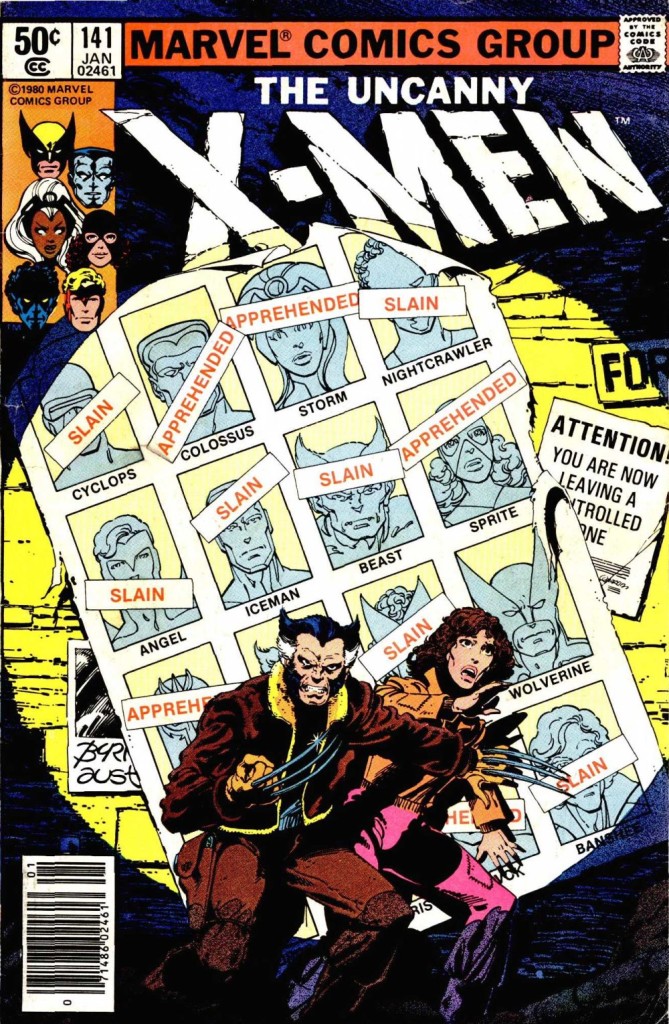 On the docket this week: X-Men: Days of Future Past *Warning, there be spoilers ahead*

A dystopian future. Mutantkind is reeling after systematic destruction at the hands of the government. These are dark times.

I’ll give Days of Future Past this – I think this probably kicked off the “whoa, the future sucks, we better send somebody back to make sure this doesn’t happen” storyline. It’s been done 10,000 times since, but I can see why this was such a big hit and has stayed so iconic. While it is certainly dated in its storytelling style, being over 30 years old, the concept had to be mind blowing for the time. Future Kitty Pryde is sent back in time to young Kitty Pryde’s body to change the course of the future? WILD STUFF. What I also appreciated is that this story was two issues long.

That’s right – two. Not 6 to push a trade, not 12 to fully flesh things out, not 8 with 16 different series tying in. Hell, there weren’t any other X-books tying in. This was two comics that told a story. It was a fleshed out story that was entertaining, and didn’t waste a ton of time. Claremont very quickly established that the future is a crappy place, and that the X-Men had one shot to head back in time and prevent it from occurring. Pretty much the concept of Age of Ultron, but fleshed out in 2 comic books. All thriller, no filler, y’all.

Wolverine and Kitty are really the stars of the show, as you’d expect from the iconic cover above. These characters are so different from what they are now that it’s almost hard to say whether or not they’re written well, as they are from a completely different time. Wolverine has progressed into so much more than his role in this series and Kitty is certainly not a starry eyed new recruit, as she is at points in these issues. She’s stronger than what I found in her older self as well, though some of that may have been Byrne constantly penciling her like she is shocked and confused.

Byrne’s artwork didn’t floor me, by any means, but I’ve seen much worse from this time period. I’m writing this article after his latest round of absolutely ridiculous and asinine remarks made their round on the web, so I just really don’t feel like talking about this guy or his work. I’ve never been great at separating people from work when they are individuals like Byrne, so we’ll just leave it at that.

Days of Future Past entertained me more than I expected to. I’m typically not drawn to comics from this time period as I find most are rather dated and verbose, but I didn’t mind this tale. I can see why it was wildly innovative at the time, and I appreciated Claremont’s condensed storytelling. No time is wasted, no crossover potential harvested, just two issues to tell a story.

More information on Marvel Unlimited can be found here: http://marvel.com/comics/unlimited