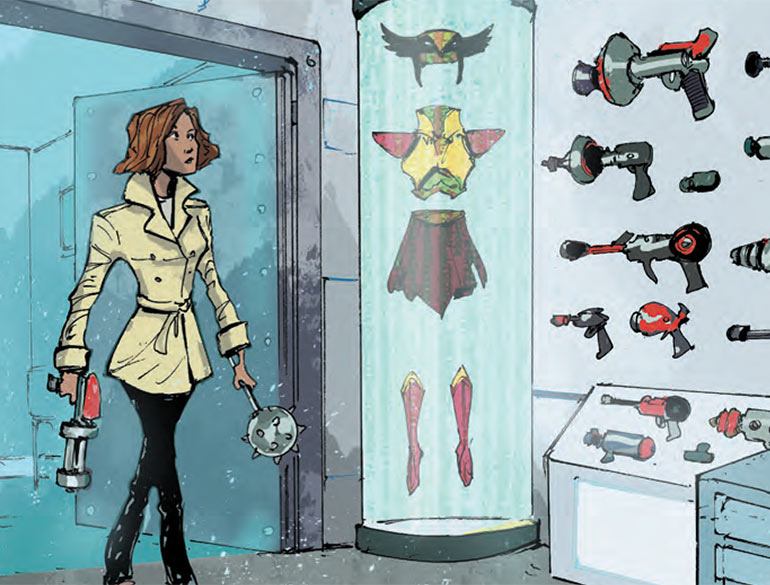 This week saw the release of DC Comics’ New Talent Showcase #1, representing the work of writers from DC’s Writers Workshop Pilot Program, a 13-week program held January through March 2016, for professionals from an array of writing backgrounds who were brand new to DC.

Nine stories, all well-executed, filled out the pages of this oversized book, but one particular story stands out: “Hawkgirl: Weapons of War,” written by Erica Schultz and illustrated by Sonny Liew.

Since part of the mission of Comicosity is to advocate for what’s great (or super-great!) about comics, we present seven reasons why we INSIST DC Comics produce a Hawkgirl series from Erica Schultz and Sonny Liew… STAT. 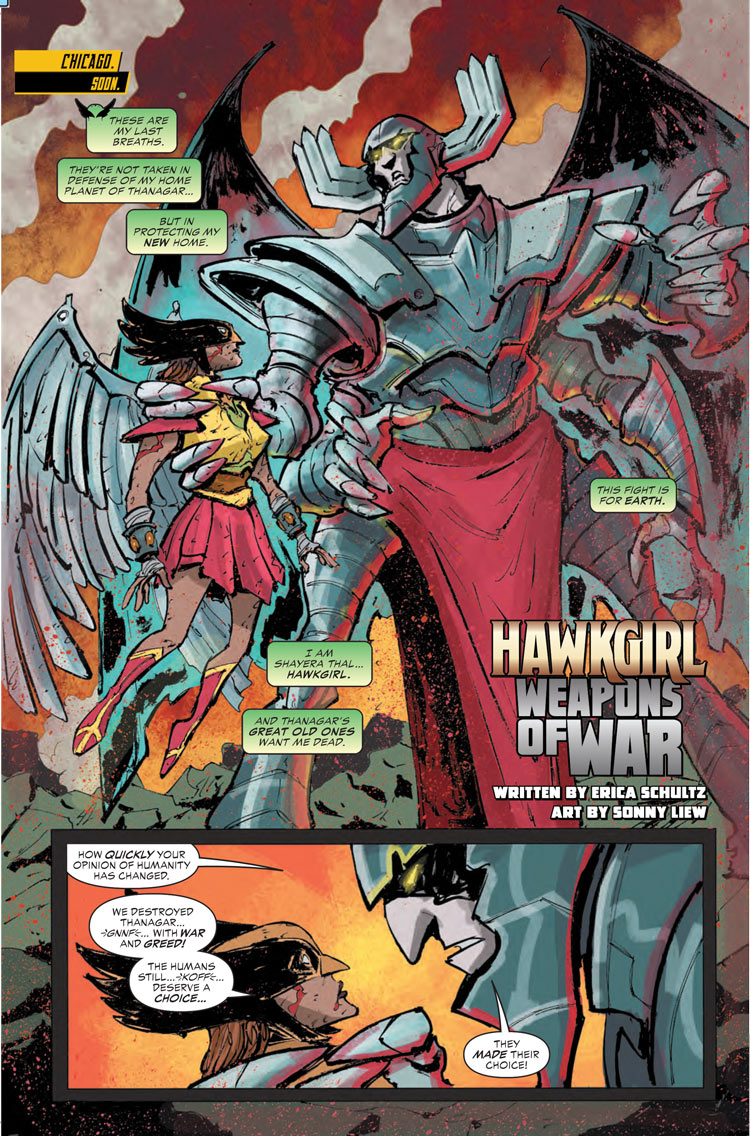 1. A Hawkgirl: Rebirth is LONG overdue.

Honestly, Hawkgirl has been missing from the main DC Universe — only making appearances on Earth 2 — since before the New 52 began in late 2011. And Shayera Hall (rather than Kendra Saunders or Shiera Hall) has been missing decades longer. Which is a travesty considering the high profile nature of her role in one of the biggest fan favorite DC television projects of all-time: the Justice League animated series.

“I’ve always been drawn to strong characters, but what really solidified my love for Shayera was the Justice League cartoon show,” said Schultz. “Maria Canals-Barrera and Susan Eisenberg voiced Hawkgirl and Wonder Woman, respectively, and their portrayals left an indelible mark on me. I was honored to be able to have Shayera fly once again.”

It’s time to get Shayera back into the limelight where she belongs. 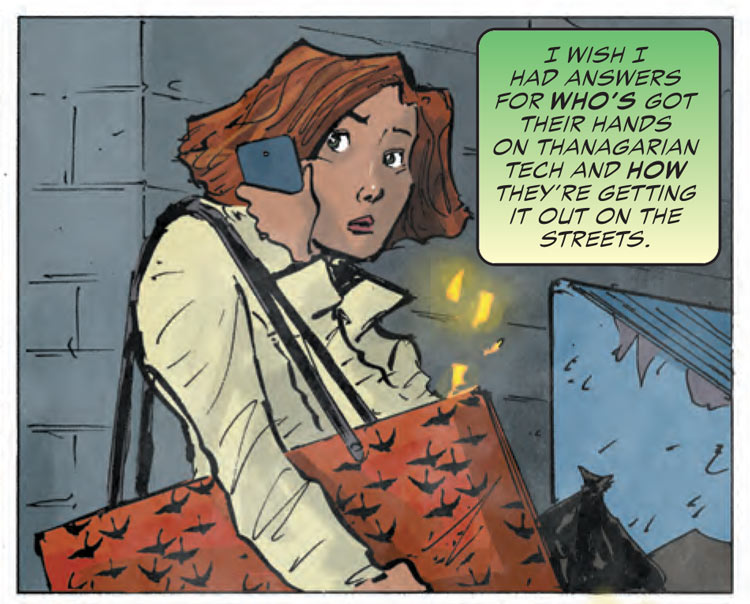 2. Shayera is a woman of color.

We’ve seen this move for Hawkgirl before: first with biracial (Latina/white) Kendra Saunders, then with biracial (Latina/Black) Kendra Munoz-Sanders, and even casting multiracial (Black/Native American/Indian/white) actress Ciara Renée as Hawkgirl for Legends of Tomorrow. But Shayera has never been portrayed as anything but classically Caucasian. Until now.

One reason for this is that Shayera has been missing from the official comics canon for so many years, last appearing long before either DC (or Marvel) started making moves to racially diversify some of their core characters. But another is that Shayera — the Silver Age Hawkgirl — has no connection to Egyptian mythology or history like Shiera Hall (Golden Age Hawkgirl) or Kendra Saunders (Modern Age reincarnation of Shiera Hall). Shayera’s origin is strictly extraterrestrial, heralding from the police force of the planet Thanagar.

With so few women of color taking center stage in DC Comics’ line, and NONE currently headlining a comic book series, Hawkgirl is the perfect opportunity to bring that diversity to DC’s line with a true A-list character. 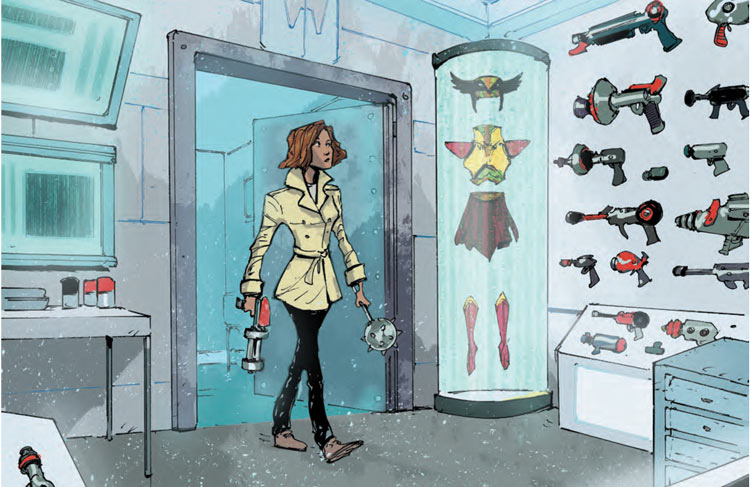 If you don’t know Sonny Liew’s work, then baby, I have a treat for you.

Exploding into the mainstream in a big way last year with the DCYou title Doctor Fate and his Singapore Literature Prize-winning graphic novel The Art of Charlie Chan Hock Chye, Liew brought the power behind his beautiful style to these eight pages and then some. Liew has already shown how stunning an action page he can deliver, but what continues to amaze is how dramatic his illustration of even the most banal scenes can be.

Doctor Fate was full of these juxtapositions between hyper-psychedelic magic moments involving Fate’s helm and the Gods of Egypt, and everyday scenes featuring the trials and tribulations of young medical student Khalid Nassour and his family. That ability would serve this particular Hawkgirl set-up quite perfectly, giving us both the richness of alien threats and battles, as well as the procedural aspects of police work and Shayera’s Earth life.

4. There’s no Hawkman in sight.

Seeing as how Hawkman is dying (maybe) for the… I dunno… eighth time since I started reading comics, I beginning to think maybe it’s time to let him rest in the grave for just a little while. Yes, yes, we all have witnessed the enduring and twisted love story between Hawkman and Hawkgirl, but one thing has become clear in the process:

It’s always Hawkman (and Hawkgirl), not Hawkgirl (and Hawkman).

Meaning, that backseat is starting to get a bit worn out. The Justice League animated series (and its successor, Justice League Unlimited) did a million things right, but one of the biggest was letting Hawkgirl stand on her own and be the progenitor in her own story. That gets watered down whenever Hawkman is around, sadly. 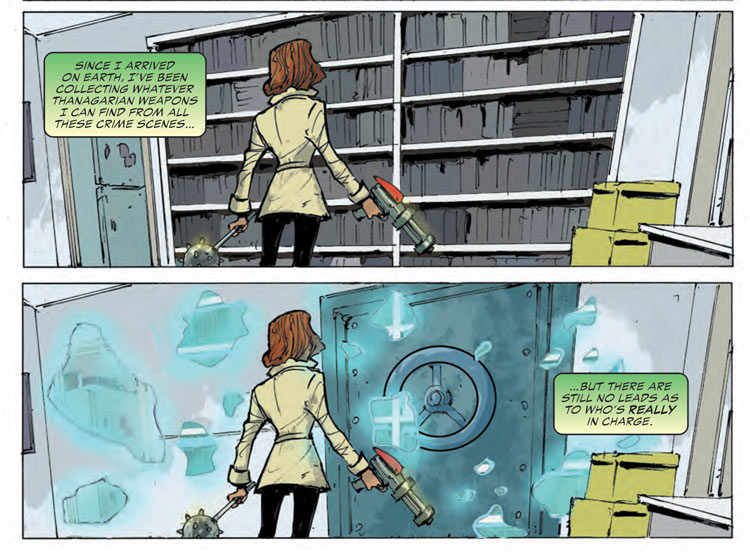 With shades of Barbara Gordon’s secret Batgirl passageway, Shayera has a hidden vault where she keeps the Thanagarian weapons she reclaims as Hawkgirl and on the job as Shayera Hall. In her apartment. Behind a disappearing bookcase. Man, that is super cool space cop stuff right there. 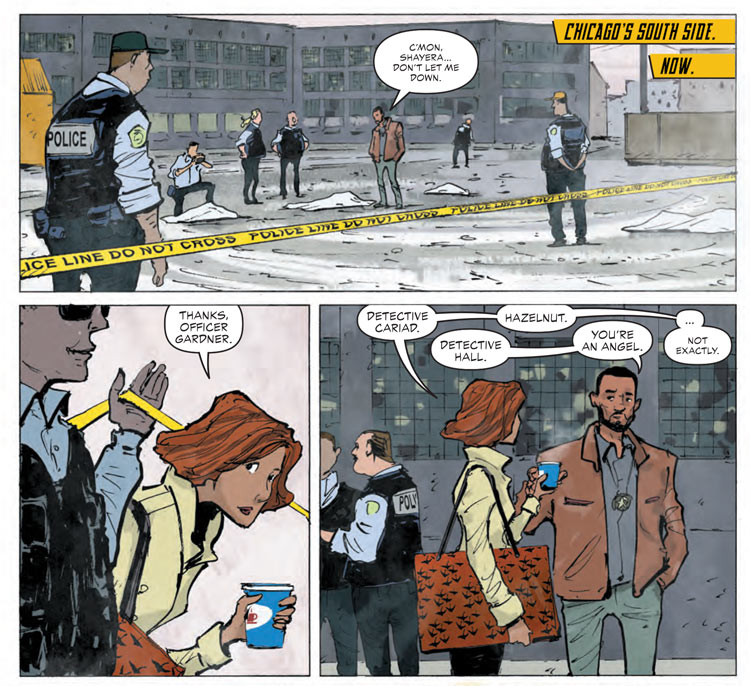 This is what’s so curious about the history of Hawkgirl (and Hawkman): Shayera was a police officer on Thanagar and came to Earth to be a… secretary? An archeologist? A museum curator? Um, why not a police detective? It gives Shayera the best double life to accommodate her mission and lets her brain and brawn get equal time on the page.

And placing Shayera into the Chicago Police Department, one of the most troubled in the United States in recent years, is a stroke of brilliance. We’ve seen Nighthawk and Batman both take on issues of race and police corruption in Midway-style cities of their own, but the well of exploration here is deeeeep.

(Plus, it’s just damn cool to see a super-hero operating out of my hometown.) 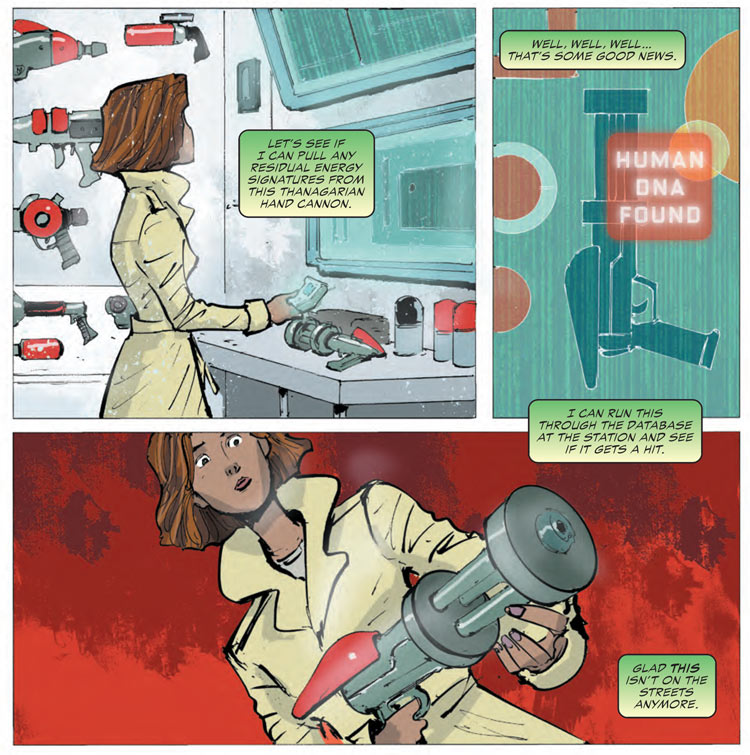 Writer Erica Schultz, in just eight simple pages, is already setting a compelling tone for an ongoing Hawkgirl series. Her grasp of Shayera’s internal monologue and the stakes of dealing with both intergalactic and regular street crime has just enough grit to raise the stakes, but not so much as to overwhelm the possibilities of grand super-hero adventure.

In other words, Schultz is already striking a balance that lets Hawkgirl ride the genre line and go almost anywhere it would need to. Gang rivalry overflowing in Chicago? Check. Alien starfish want to eat our faces? Check. Justice League needs a hand with the Absorbicon? Sure! Little kid lost on the L holds the secret to a twenty-year-old murder? I’m in.

The possibilities are endless here, and I for one can’t wait to see it all play out.

So, if you’re DC Comics, the answer is simple: greenlight Erica Schultz and Sonny Liew on a Hawkgirl book. We need this in our life full-time. For reals.

And if you haven’t had a chance to read the eight pages (not to mention the other eight fantastic shorts from a bevy of talent) featured in New Talent Showcase #1, run to your comic shop — or Comixology — and grab it today! You won’t be sorry!