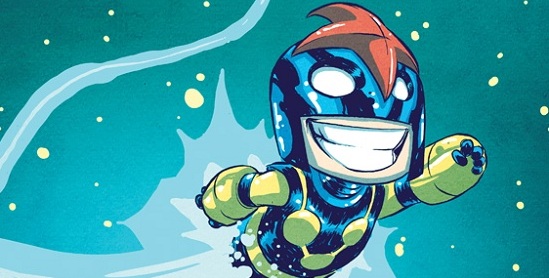 Another month is in the books, not the greatest month for the all-ages set, with the final issue of Young Justice hitting the stores and middling sales figures, but with some fantastic news from the Kickstarter front. I think that Kickstarter is a great avenue for comic types to explore, and also a great way for us, as parents to support projects that we would let our children enjoy. It’s not good enough to say that the quality of most all-ages books isn’t very good; therefore I am not going to buy any of them. Take a stand for what you want out of the genre, find it, and support it. There are a lot of comics from the big 2 coming out featuring younger characters; hopefully they give these titles a fun run, without going too adult on us. 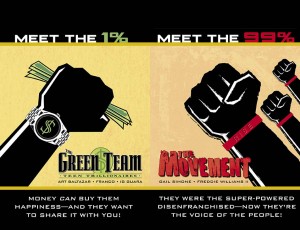 Art Baltazar & Franco launch ‘The Green Team’ for DC – Telling the adventures of an extremely rich collection of boys who use their money to fight crime. Fresh off their stint on the excellent Superman Family Adventures, Art and Franco bring an old idea to the new DC. High action and humor are expected to be the themes of this title, and given the pedigree, I am looking forward to this companion piece to DC’s The Movement.

DC launching continuity free digital book: All-New Adventures of Superman – Similar to DC’s Legends of the Dark Knight, though not an actual all-ages book. Taking Superman stories out of continuity can make for a great introductory piece for the character. Provided the Orson Scott Card scandal doesn’t derail the quality of the series, then it should be an interesting addition to our comic reading. 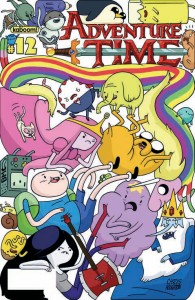 The sales from BOOM!s Adventure Time universe still seem to be holding strong. Not too much fluctuation overall in the numbers from one month to the next. As I alluded to in my introduction, it was an average month for all-ages titles, with nothing jumping out as a book that outsold the typical numbers. This time DC has a couple of books in the top 5, with still nothing from Marvel. A very big differential between the top 2 books certainly hints at the large skew of popularity vs consistency. 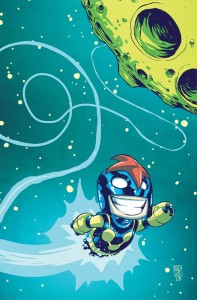 Nova #1 (Marvel) : Nova is a strong introduction to a character that has existed for quite a while in the Marvel Universe. This is a new Nova, not the Richard Rider character that I grew up with, but it seems pretty kid friendly as of issue one. The art is good, the story is fun, and it also acts as an introduction to the Guardians of the Galaxy. Given the ties, not only to the Guardians comic book, but potentially the movie as well, then Nova can be a fantastic gateway book.

I do much of my reading nowadays on my tablet. I find reading comics digitally to be so much easier for me. Often I will be reading a comic while my son is playing in the same room. When he gets tired of playing, and wants to see what I am doing he will jump up beside me and ask questions, so I occasionally have to be careful to monitor what I am reading when he is around. The vast majority of super-hero merchandise that exists for children is based around the iconic costumes of the characters, and this is what my son recognizes. When I am reading a comic book that features an updated costume of one of these characters, he sometimes has a hard time connecting on why the character looks different than he is used to. This will (more often than not), force me into a geek moment of trying to explain the history of Batman to a 4-year old. Running down the plot of the current storyline for my son is often a challenge in itself, but the entire history? Simply put, it’s an exercise in futility. At these points I usually offer to let him play some Angry Birds on the tablet. It seems to be a good compromise.

I talked about what Kickstarter could do for the all-ages market earlier, and the reason I brought it up, was Art Baltazar and Franco’s ‘Aw Yeah Comics’. This Kickstarter campaign funded the day it was put up, and currently sits at almost $40,000 (of a $15,000 goal). This speaks volumes to me about the desire for quality all-ages content, and I hope it spurs to action more creators with these kinds of stories in their heads. I am excited about this series, and can’t wait to get my pledge reward.

Though it has nothing to do with this column, I will happily mention that Harrison Ford is returning for Star Wars episode VII, which makes the young geek in me very happy. Despite my son’s love of Star Wars, he hasn’t latched on to the specific actors like I have.

Before I go, I want to say that there are many ways to support comics and the all-ages community, whether it is your local comic book store, Kickstarter, or Comixology. Quality titles do exist, and the interest is there, so give something new a chance. Thanks for reading, and until next time, keep collecting!