Welcome to the first official Access All Ages column. It’s the beginning of a new year, and while there is plenty of excitement about where the comic industry is going, there is lots of questions about the all-ages market. All-ages books have never sold very well and they are a labor of love for those who apply themselves to the genre. They fill an important role in allowing young readers to not only realize a love of comics, but of reading in general. One of the most important things to remember is that whether one is enjoying a comic book or a regular book, they are still reading, and that is an important quality to foster in our children. 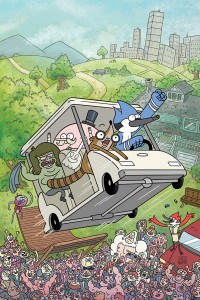 BOOM! Studios launches Regular Show series – The Cartoon Network show featuring the adventures of Mordecai and Rigby comes to comics. I have never watched the show, but BOOM! is giving consistent attention to the all-ages comics market. It fits in nicely with their Adventure Time property, and should be able to maintain similar sales levels.

Stan Lee bringing Kids Universe imprint to stores in February – On paper, this is super exciting. In reality, how many of Stan “the man” Lee’s projects do we ever remember anymore? I want this to be a big deal, because it could help turn the tide and remind everyone that there is an untapped market waiting to be explored.

Young Justice and Green Lantern animated series appear to be cancelled – As of me writing this, it appears that neither show will be returning to television; both are being replaced by other animated series, Beware the Batman and Teen Titans Go! (which I am very excited about). I only bring it up because of the implications on the tie-in comic titles. Young Justice is done as of issue #25, and from what I can see, Green Lantern still seems to be solicited. It’s tough to lose any kid-friendly comics from one of the big 2.

Superman Family Adventures will cease publication as of April 2013 – Probably the news that saddens me the most. Superman Family Adventures is a fun series (that sold just over 7,000 copies this last month) which was an interesting hybrid of kid-friendly with a small amount of continuity added. For fans of Art Baltazar and some of the characters in this title, I will point out the DC Super Pets chapter books published by Capstone Kids as a great way to continue reading their adventures. 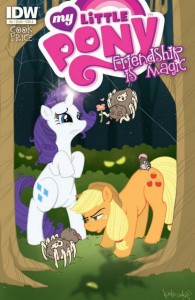 No surprise to see My Little Pony at the top of the list. It is an excellent series with great crossover potential. BOOM! continues to see solid sales with the Adventure Time books. The vast majority of all-ages titles are media properties, and it is one of the best ways to attract young readers. The most interesting statistic illustrated here, is the lack of any Marvel or DC titles in the top 5. There is a definite lack of interest by the big 2 in cultivating the all-ages market, with one company being far worse than the other (I’m looking at you Marvel). 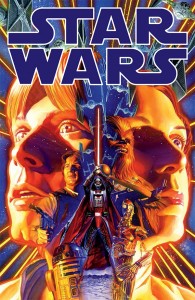 Star Wars #1 (Dark Horse Comics): Brian Wood’s Star Wars was an instant choice for my gateway book immediately after I read it. If your children (or you) are a fan of Star Wars, and find the extended universe a little too daunting, then this is the book for you. Nicely tied into the movies, with characters we all know and love, this book is a winner. It is a great gateway, because it features on-running stories that seem well tied in to the film franchise.

My son is a huge Star Wars fan; he is not even 5, and he has already seen all of the movies multiple times (primarily thanks to having a dvd player in our van). I am a vast repository of Star Wars knowledge, but he is catching up at a rapid rate. I had taken him in to our local comics shop (Alpha Comics – shameless plug), and he instantly gravitated towards an extended universe Star Wars comic (I think it was from the new Boba Fett series). He picked it up rather excitedly and started asking me who all the characters are. As I have never been a big fan of the extended universe, I was at a loss. It was a big challenge to try and explain to this child that you, who previously had known the answer to virtually every question he asks, are now left mouth agape, and babbling like an idiot. I happily took the book from him, and guided him back to the Spongebob comic, where at least he already knows all the characters. This is one of the reasons why I am so happy with the Dark Horse Star Wars #1, because I can happily let my son look at it, and I have no problem explaining who the characters are. And once again, I can happily retain my status as the dad who knows everything. 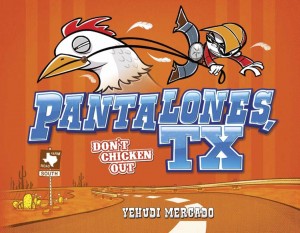 1. Pantalones, TX (Archaia) Written & Illustrated by Yehudi Mercado. The story of Chico Bustamente, troublemaker of Pantalones, Texas (where underwear was invented). An engaging story that reminded me of the animated series Kick Buttowski, it features the good Chico, vs the evil Sheriff. Good art with some extremely inventive layouts make for a good read. Fairly well-paced, but I give it top marks for having a giant chicken.

2. Peanuts v2 #5 (kaboom!) I wonder if much of the intended readership of this series has even read any of the original Charles M. Schultz’ Peanuts strips. A couple are colored and included in every issue, but what strikes me, is that as a long-time reader many of the stories here have taken elements from earlier Peanuts stories and riffed on them to form a short comic story. It makes sense in theory, but while I was reading it, there was a constant feeling that I had read the story before.

3. Adventure Time Fionna & Cake #1 (kaboom!) Fionna & Cake are engaging characters spun off into their own 4 issue mini-series. A cute storyline with art very reminiscent of the animated series; I would definitely recommend this one. If you can’t get issue 1 in the stores, then I would probably wait for the trade, and if someone is a fan of the show that you are hoping to get into reading comics, this could be a fine start.

4. Adventure Time #11 (kaboom!) In all fairness, I have watched a few episodes of Adventure Time, and it doesn’t really work for me. I wasn’t very excited about reading the tie-in series, but it is pretty good overall. It gave me a better chance to understand the characters, and while I can’t imagine reading it on a regular basis, to a fan, it is probably everything you could hope for.

5. Superman Family Adventures #8 (DC) The fantastic Art Baltazar works on this book, and it is ridiculous amounts of fun. I think DC really had something with this series (and the Super Pets line), and it’s a shame that it never reached a broader audience. I think that many people wrote it off without reading it due to it being a “kid’s book”; it is much better than that and if you are a Superman fan, I highly recommend you look for the series.

When I was very young, I was never really interested in comics aimed directly at children. Because I got into collecting in my teens, I was always looking toward the adult books (the more adult the better in some cases) to fill my entertainment needs. One of the problems I have with kid’s books is the lack of continuity. Continuity is what keeps us coming back for more. One of the best ways to maintain readership is to give them a reason to come back next month. Something that I have recently embraced is the Public Library system. It offers a great source of both trade paperbacks, and also children’s books featuring our favorite comic characters. It is a fantastic way to explore the genre with your child without shelling out big bucks to see if your child becomes invested in one of the characters along the way. Needless to say, I grab every Star Wars book I can find.

Before I go, I want to give special mention to Skottie Young’s Nova cover. His Marvel NOW! variant covers have all been awesome, but I really like Nova, and this just makes me smile. I hope the book is as good as this cover. Thanks for reading, and until next time, keep collecting!