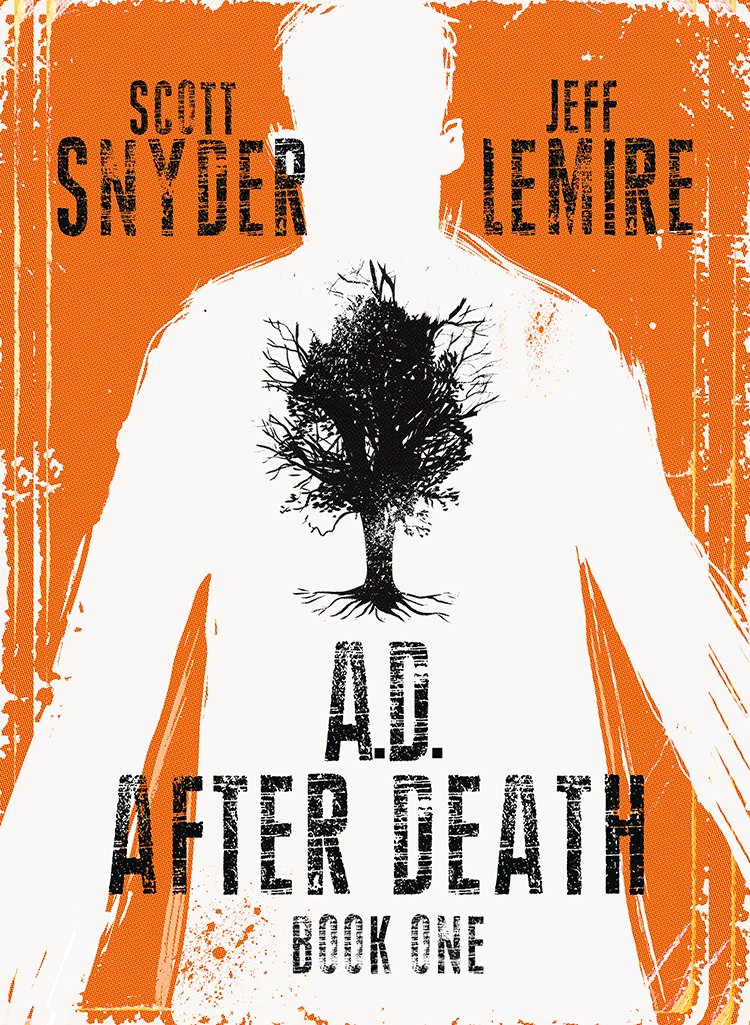 A.D.: After Death – Book One opens with a first-person narrative trickling over watercolors, building to tell the tale of Jonah Cooke, reflecting on a time long past and its impact on today. Written by Scott Snyder and given visual life by Jeff Lemire, A.D.: After Death – Book One pushes beyond the notion of what a comic book should be and gives readers a completely different, magnificently engrossing experience.

Jonah Cooke recalls a formative trauma from his childhood, his own transformation into the “clumsy sketch of an adult” through his teenage years, and his emotional uneasiness throughout it all. Snyder’s script seems autobiographical, or, at the very least therapeutic, touching on historical events that are alleviated once shared. To accommodate the space required to purchase reader investment as well as to develop Cooke’s depth, Snyder bounces this story between three distinct eras: 1982, 825 A. D. (or “After Death”) and “Now,” which is clearly relative to the tale as opposed to being indicative of 2016.

Each section is visually distinct, and critically important to understanding Jonah Cooke. 1982 is depicted in prose punctuated with nifty watercolor pieces in Lemire’s drawing style, but more lively due to the organic nature of watercolor. This tells the story of young Jonah and is supposed to be constructing the blueprint of Jonah’s life before our eyes. 825 A.D. appears to be slightly before the “now” of the tale. Whenever we visit 825, (which is clearly informative of the “now”) or “now,” the story shifts from illustrated prose to traditional comic layout, right down to black-bordered panels.

Throughout A.D.: After Death – Book One Lemire’s trademark style straddles the line between horror illustration and Dr. Seuss whimsy. The characters all have bulging eyes that could be such due to elation or depravation, the lines are scratchy and electric, and the colors are ethereal. The prose bits gain emphasis through the spot illustrations, which punctuate the story contained in the roughed-up Courieresque typeface, urging the reader into the prose, nudging them through it and congratulating them on the other side, much like the illustrations of a Golden Book in the hands of a burgeoning reader. A very odd, science fiction horror wannabe Golden Book.

At no point in A.D.: After Death – Book One do Snyder and Lemire spell it all out for the readers. They don’t have to, and they clearly don’t plan to. This is a story that dares the reader to engage and becomes its own fuel. There’s not enough in the pages of this issue to draw a conclusion, nor can we be sure how much we should be cheering for Jonah Cooke, but one thing is certain: Snyder and Lemire make Cooke a character worth reading about. As a matter of fact, the aforementioned autobiographical aspect of the story might leave readers wondering if they’re reading a fictional piece at all. Is the 1982 segment truly Jonah’s story or Snyder’s? Or, even more maddening, should it be ours?

This review was written based upon a review PDF, but as I understand it, the final printed book is going to be slightly oversized, which will only amplify the vitality present in Lemire’s art. Snyder and Lemire might be giving us autobiographical peeks or wildly creative fiction. Either way it’s compelling and absorbing and pushes the limits of what comics can and should be. At several points in my reading of this issue, I found it to be a spiritual cousin to R. J. Ryan and David Marquez’s The Joyners, except this story has just a little bit more hope around the fringes. Book One has my attention. Let’s see what Snyder and Lemire do with Book Two.