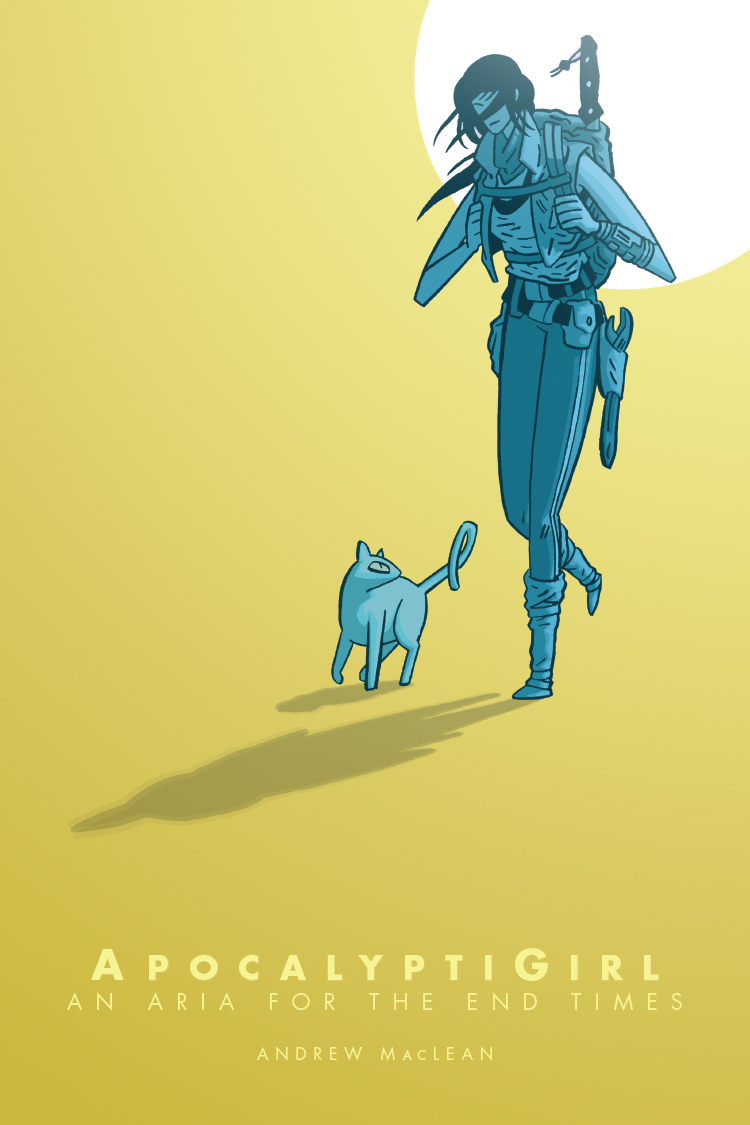 The logline is what got me in the door. We mock these ‘it’s x meets y’ methods of pitching but sometimes, they’re exactly what you need to hear. According to Michael Avon Oeming, co-creator of Powers, Andrew MacLean’s ApocalyptiGirl: An Aria for the End Times is like “a mixture of Nausicaa and Adventure Time.” I love Nausicaa and had heard enough good things about Adventure Time to pique my interest in a graphic novel birthed from their intersection—and I have to say, the comparison is decently apt.

The story is a post-apocalyptic one that follows a young woman, Aria and her cat Jelly Beans as they carry out her mission to recover an ancient power. The Nausicaa-like elements come in when we learn that Aria is trying to repair an enormous old mecha, upon whom moss and weeds have grown for some time. It’s also hard not to think a little bit of Ghibli in general when you have a lush environment, peppered with old technology. But it’s the main character herself that brings the Adventure Time element. Shortly after we meet Aria, she is already getting into arguments with the narrator—herself—and playing ‘got-your-nose’ with Jelly Beans.

The art definitely gives an animated sort of feel, which I think comes from the fact that it’s much more about emotion than it is physical consistency. There are some, or really many, styles in Western comics that rely on accurately or semi-accurately conveying a character or scenes. With those styles, I find that I’m looking for the art to convince me that this character really exists in their 2D space. But with styles like Andrew MacLean’s, ones that are more similar to manga, it’s immediately clear that the number one goal is emotion, with physical consistency and concrete accuracy taking the back seat.

This is really evident in the way that Aria’s eyes are drawn. Because of the book’s genre, I can’t be completely sure that this change isn’t really happening (science-fiction means that basically everything is on the table), but I read the changes in their appearance as an emotional cue. Much of the time, we see her typical, cheerful self represented in a certain style—which is suddenly replaced by a different style when she’s frightened, angry, or hurt. On the whole, MacLean commits to portraying a very expressive protagonist, which definitely contributes to the success of the overall work.

The setting is interesting. Often, it’s portrayed in a single color palette that overlays the inks. Similar to the Aria’s character design, realism is largely eschewed in favor of atmosphere. In some parts, the background is depicted in varying shades of blue and in others, a palette of reds and oranges. As a result, your eye is immediately drawn to the portions of the panel that have more color variation—typically the protagonist and other characters. However, I admit that I wanted a little more specificity from the setting. From the story—and the title—I know that we’re in a post-apocalyptic time and place, but there was relatively little detail that made either the back story or the land itself unique.

Going back to the Nausicaa parallel very briefly, in both stories, the mythology of the land is built up dramatically, as is the notion of the setting being a home for the protagonists—but where Nausicaa really succeeded was making the physical setting a character in the way that ApocalyptiGirl doesn’t quite manage. More could have been done to make me really engage with the surroundings and be immersed in the setting, especially considering how much of the story relies upon the mythology and larger world.

The narrative itself treads rather familiar territory, but it’s the characterization of Aria that really makes it shine. It’s hard to show the full breadth of personality in a graphic novel of less than 100 pages, but MacLean does a great job at showcasing multiple facets of Aria’s personality. I’m particularly impressed by the way he handles much of the violence that is enacted either upon or by the main character. It is much more nuanced and balanced than we often see Aria reacting to the impact of her violence, whether upon her or others. It’s a refreshing approach that shows more consideration than we’re often given.

Also, cat lovers, get ready for an instant fave because Jelly Beans is one of the best things about the book. MacLean absolutely captures the essence of catdom and Jelly Beans’ relationship with Aria adds just the right amount of levity and emotional content to an environment that could otherwise be a little too dark. It’s also important to note that the cat really has his own personality. Often animal side-kicks are used to demonstrate something about the human counterparts, but Jelly Beans had patterns, behaviors, and actions that really convinced me that he was an individual. He’s as much responsible for the success of the book as Aria.

The characterization of the protagonists are what carried through most of the book, but I would say that the world-building is somewhat lacking. Much of the back story and history is conveyed through either voice-over or cutaway scene and, as I commented with the art, I never felt as immersed in the world as I wanted to be. When I came to the climax, I was invested in Aria’s fate but not in the bigger picture. I never truly understood why she was where she was or what the final outcome really meant.

In addition, though the storytelling was mostly smooth, the transition between back-story and present action was sometimes a bit clumsy and uneven. There’s a narrative element that tries to connect Aria’s name with her personality that reads a little bit too on the nose. Though I mentioned the arguments between the narration and the character as an aspect that’s reminiscent of Adventure Time, it read as a bit gimmicky—and then largely vanished for the rest of the story. Mostly, MacLean does take a step back and allow Aria to show us the story, but there is the slightest tendency to tell on occasion.

Overall, ApocalyptiGirl: An Aria for the End Times was an enjoyable read. Though I would have preferred stronger world-building, Aria is a unique protagonist with an absolutely precious cat and both are the true strengths of the book. The artistic style only amplifies this strength and makes for a consistently engaging and solid experience. ApocalyptiGirl is a fine graphic novel debut for MacLean and a fine read for those looking for characters that have been created with care.