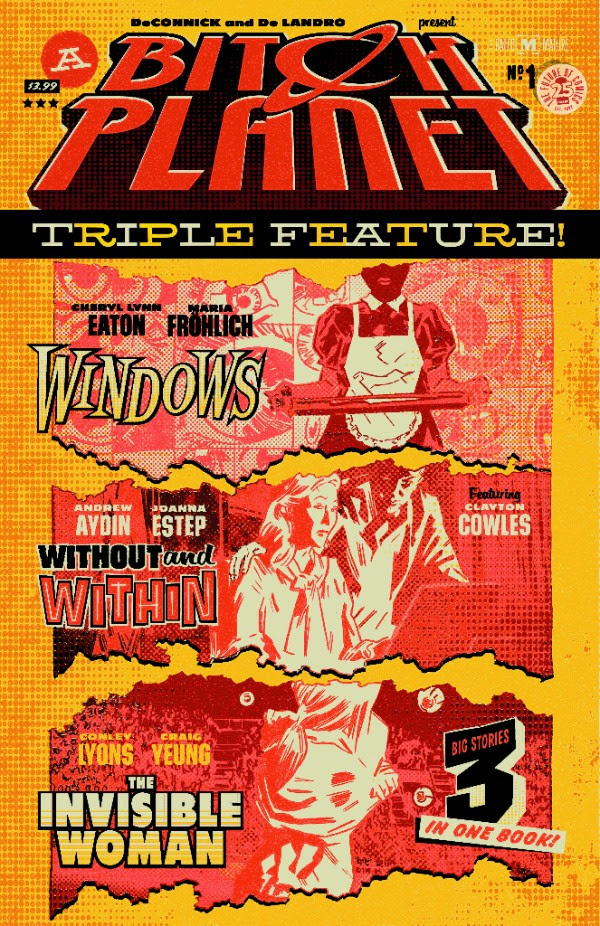 Bitch Planet: Triple Feature #1 takes a step away from the main narrative and features three satirical stories set within the Bitch Planet universe. Each story is created by a different team and focuses on the experiences of a professional women within the world, highlighting the many ways in which sexism and misogyny present in this society. Ranging from micro-aggressions to straight up in your face aggressions. Bitch Planet: Triple Feature #1 captures the rage inducing, bleakness that I at least have come to associate with the title.

The first story, Windows, written by Cheryl Lynn Eaton with art from Maria Frolich centers on a nurse, an ex-employee of the auxiliary compliance outpost, who finds herself working in a service capacity but still being faced with the guilt of the decisions that cost her job. Decisions that were not hers but were made in spite of her competence and desire to do the right thing. Frolich’s art is sparse but haunting with the repetition of the eyes impressing the guilt and the anger felt by the character upon the reader. Frolich’s facial expressions make it very clear how Lupe is feeling throughout the story, her posture defensive at all times.

Followed by Without and Within, the story of Anna and her first day on the job as a P.A. Written by Andrew Aydin with art from Joanna Estep the story highlights the hypocrisy women are subjected to when surrounded by men who will espouse the importance of security and safety whilst simultaneously encouraging sexual harassment and violence. Set upon by coworkers and her boss she is objectified, ridiculed and then told it’s her fault. Estep’s style gives Anna a wide eyed, eager to please look but she also is able to show the strain of a woman forcing a smile in order to deescalate an awkward or uncomfortable situation. This story, maybe more so than the others, is the one that many readers will be able to relate to especially as saying no to unwelcome advances becomes increasingly dangerous.

The third story and my personal favourite was The Invisible Woman, written by Conley Lyons with art from Craig Yeung and colours by Marco D’Alfonso. The main character Leslie has such a charming naiveté about her that there is never any doubt that things will not end well. A business woman, desperate to be seen, but unwilling to upset the status quo. When her attempts to move up in the company are cut down it is a chance encounter that ignites her confidence to rebel. Up until this point Leslie is very restrained, eyes and shoulders down, almost visibly quiet. The art and colours throughout show Leslie almost blending in with the wallpaper and really accentuate her role within the company and the fabric of the supporting characters lives. However the change in posture and body language that Yeung captures following this encounter is so pronounced that Leslie could be a different person and it’s incredibly indicative of not only her change in mindset but also the power of knowing that you have been seen. That you matter and could make a difference.

All three stories feature women being condescended to, forced to compromise, to fit a vision of womanhood that does not represent them within the workplace. A location which already restrains our behaviours. Each shows the emotional cost of compliance and the physical results of fighting back. There are no safe spaces in this world. There is no safe anything.

As with any satire there is humor to be found in all of the stories but that humor is dark and it is cutting and it brings little respite from the very real situations that these women find themselves in. All three stories manage to hit a little close to home or in some cases a lot close to home and you will find people who say this is unrealistic or that women should be lucky that things aren’t this bad but the truth is that things are a lot worse for a lot of women and sadly seeing it laid out in a comic is one of the few times it ever feels like anyone is even paying attention