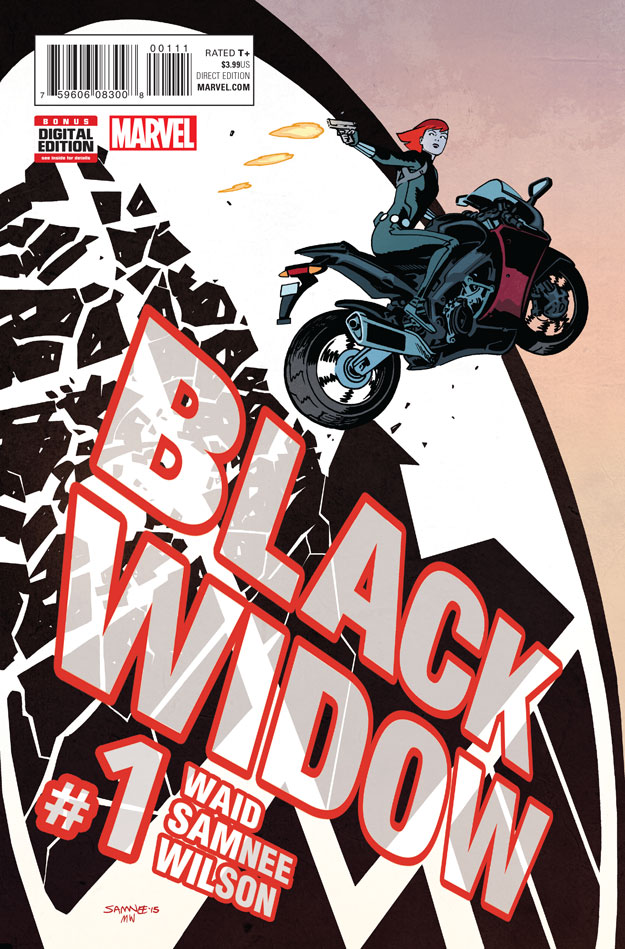 “KRAK,” “FAK,” and “WHUMP” – a trio of sound effects collaboratively crafted by artist/writer Chris Samnee and letterer Joe Caramagna opens up Black Widow #1 and sets the stage for a world of hurt. The premise might be familiar – Black Widow is on the run from S.H.I.E.L.D. – a plot we’ve seen, read, or fever-dreamed a few times over. From the first panel of an office setting thrown into chaos, Samnee and Caramagna, with writer Mark Waid and colorist Matthew Wilson take the readers by the hand and promise excitement, adventure, mystery, and fun.

By the end of Black Widow #1, readers are sure to be gasping for breath, as the creative quartet who crafted the adventures of Matt Murdock through September 2015 give readers everything we could want and more.

This isn’t Natasha Romanoff’s first rodeo, and as S.H.I.E.L.D. puts their sights on the Widow, we all realize she’s slipped the sights and disarmed the weaponry. Widow goes on a five-page tear through S.H.I.E.L.D., even matching up against Emily Preston along the way. The dialog is to be expected for such a scene, but the scene is far beyond expectations.

If we were to judge Chris Samnee’s debut as a writer for Marvel Comics, we would have two words of dialog from the main character to base the judgment on. Except for the fact that this is Chris Samnee, who can use 80% fewer lines in his drawings than most other artists to tell the same story and do so in a more dynamic manner. And you know what they say about words and pictures. Samnee is a master of economy for both. Yes, Samnee is collaborating with Waid, but the text page at the end of Black Widow #1 makes it quite clear the two are collaborating.

This issue moves from start to finish with the power of visual storytelling, the absence of caption boxes and the promise of more thrills to come. With a scaled down set of tools, however, and absolutely no first-person narrative, Waid, Samnee, Wilson, and Caramagna assure readers this is Natasha Romanoff from the movies, or the comics, or readers’ wildest dreams. This is everything the mythical Black Widow movie should have in the pre-credits scene and more. Natasha shows the readers who she is and what she’s capable of, simultaneously warning the reader away, but also urging them closer. We can trust Natasha after all, right?

And therein lies the mystery central to Black Widow #1. Waid and Samnee have put Black Widow on the run and allowed her to be dangerous. She’s desperate to escape, but not desperate to survive. She has this all under control and she’s totally in control. And, as readers, we have the right to be thrilled and anxious, relieved and excited.

Samnee and Wilson are just as in control when it comes to the art. The duo has seemingly worked together more frequently than not, from Thor: The Mighty Avenger to The Adventures of Superman to Daredevil and now on to Black Widow #1. Their collaboration has given both artists ample latitude to experiment, to push and encourage one another and themselves. Black Widow #1 uses a completely different palette, descendant of Daredevil, sure, but more ethereal. The yellow hues that permeate the issue give the story anxious underpinnings, but they also accentuate the energy of the situation, giving the visuals a fever-dream quality while also serving as a welcoming canvas to the explosive, violently vibrant red that Wilson measures into the story.

Caramagna is just as integral to the visual attitude of Black Widow #1, as he lets Samnee punctuate frames with hand-drawn organic effects and mutterings, but also leverages the more impactful effects when the time is right. The letterer’s choice of redacting swear words amplifies the core mystery of this comic, but also reminds readers to have fun with this read. Caramagna engages our imagination throughout this adventure as much as Waid, Samnee, and Wilson do.

And Samnee, well, he’s still Chris Samnee, and we are damn lucky to have him working in comics. His art is understated and powerful, his storytelling is sublime, and his characters are as alive as any drawings can possibly be. Credited as a co-writer, Samnee is clearly invested in this story and Natasha Romanoff’s predicament, and it shows through brilliantly in his art. A master of less is more, Samnee seizes a couple opportunities in the story to tinker with cross-hatching and to make some drawings much more impactful. Shadow, cross-hatching, and line are as much tools in Samnee’s arsenal as his pencil, pen, and eraser (even if those pieces are digital). All of this makes Black Widow #1 a mesmerizing read, one I’ll be back into by the end of the work week. At least twice more.

All-New, All-Different Marvel has had some pretty sweet successes, and this is definitely another one on that count. Waid, Samnee, Wilson, and Caramagna are the best of the best at what they do, and, in the case of Black Widow #1, what they do is make gorgeous, thrilling, enjoyable comics.