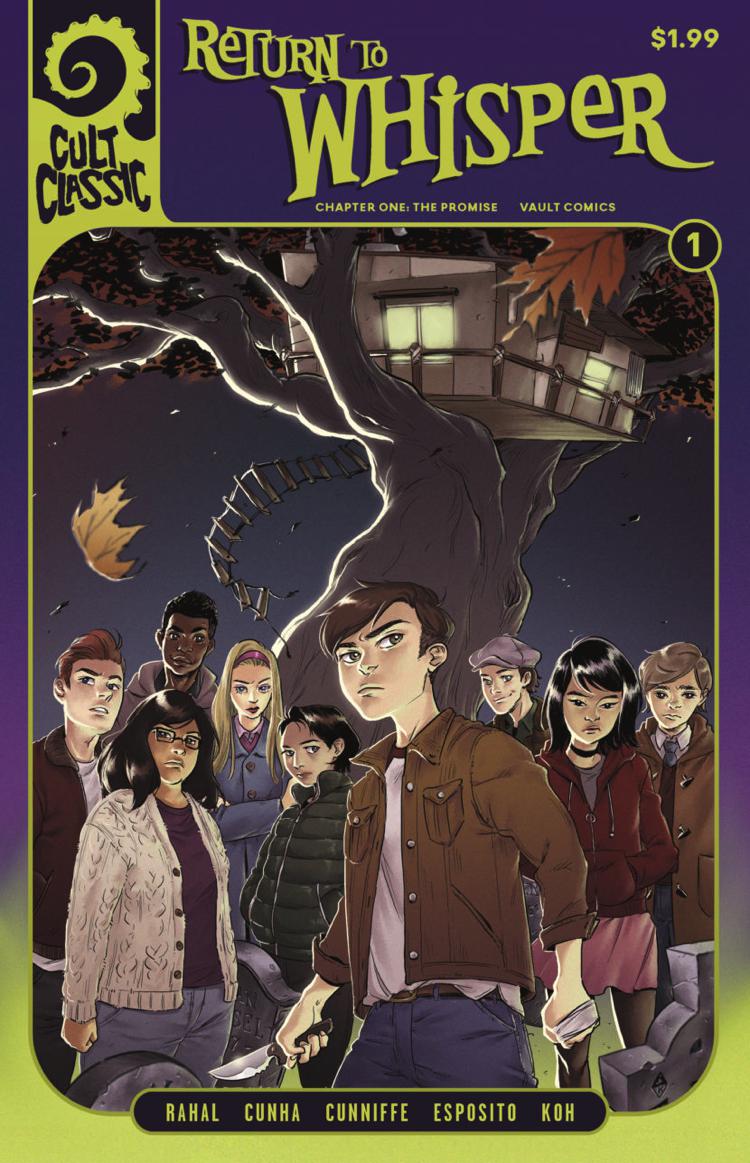 Our childhood almost always comes back to haunt us at some point in our adult years. If you haven’t experienced it by now then you can be sure that it’s coming for you. In Cult Classic: Return to Whisper a group of friends who shared a secret as kids have the experience intrude back into their lives years later. The creators of this story have given readers a mysterious tale to enjoy and ponder on.

Eliot Rahal has crafted an engrossing coming of age story full of mystery, secrets, and murder. The reader will immediately connect Return to Whisper with movie classics such as Stand by Me, Goonies, or IT. However there seems to be something even darker woven into Rahal’s story. The darkness, at least in this issue, can be found in the warning of young Wyatt during an oath the kids make:  “Who knows what kind of people we’ll be.” Growing from child to adult there is always the threat of maturity either strangling or aborting the child that we once were. It’s something that touches everybody and what Rahal uses as the protagonist in this issue. The question of maturity and the past reaching into the present looms over every page of this issue. The dialogue appropriately captures the childhood chatter exchanged between a group of friends and grown up, a little, as they become adults. In other stories flashbacks can wreck the flow of the story but it works well here. The story is interwoven with scenes of their childhood as well as their favorite TV show. It helps to add tension and danger to the present.

Felipe Cunha’s style works great with the story and successfully gives each character their own look. He also does a nice job of carrying that over into their adulthood making it easy to keep track of the large cast of characters. There is an interesting change in framing between the kids and their adult versions. The kids are drawn in mostly close up shots or shots were they fill up the entire panel giving them a larger than life feel. The adults are framed in mostly wide shots and over-sized surroundings that leaves them looking small and vulnerable. They look like kids in adult clothing and it visually illustrates that even though they are adults they are still stuck in whatever happened to them in the past. Dee Cunniffe, as always, provides excellent colors for the story. She gives the children a colorful scheme while the adults are grown up with a slightly paler version of those same colors. The lights and shadows amp up the drama in key scenes throughout the story and make the entire book come alive. Taylor Esposito provides the book with the high quality work on lettering that he is known for. Although lettering can oftentimes be overlooked Esposito provides starkly different voices for characters throughout the issue.

Cult Classic: Return to Whisper is a must read for the new year. It splits adulthood with the golden age of a child’s youth and a secret that couldn’t stay hidden. It’s a story that most readers can identify with in some form or another and will enjoy getting caught up in. The artwork of the creative team seals the deal for making this issue the start of something special. Return to Whisper is sure to be a favorite of 2018.