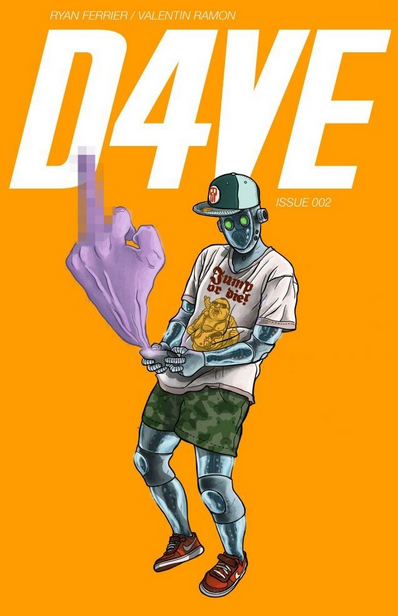 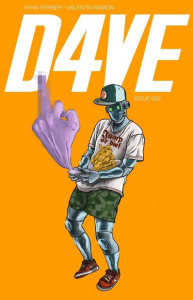 It’s a comic that speaks out against the corporate mindset, the drollness of existence for the everyman or the has-been; and it does it through what should the calculated and cold mind of a computerized brain. Too bad these robots adapted their own form of emotions too.

Ryan Ferrier taps into his darkest sense of humor so far, with this series about a once big-time fighting intelligent machine who is now the problem in a corporate environment that sweeps its problems above instead of below. This issue continues the story lines laid out in the first issue and expand upon D4VE’s creative imagination that you normally wouldn’t attribute to robots. Oh, and D4VE’s got a new bouncing teenage-son!

With computer/robotic based puns, and gross-out-smart-mouth humor from the antics of the kind of teenager no parent who appreciates their sanity would want, there is probably too much for the thirty-something adult to find relevant in their own lives. It duplicates the everyman existence and his desire to be somebody — or worse, once being someone and falling from grace into mundane existence. Marriage, parenthood, work — nothing is off the table for moments where you’ll bust a gut laughing, then sigh in despair the next second because you find it sadly hitting too close to home.

Ramon’s art feels clean and styled perfectly for the feel of the story. Concentrating on the most of the characters and keeping the backgrounds simple helps the reader to focus more on what emotions they would project onto their blank faces of the metal inhabitants of this world. Only on occasion is greater detail provided to give context and move the story along so that you’re not lost or lingering too long in one place, providing great pacing.

Like any sane person, by the end of the issue, D4VE is thrown a new plot twist that gives him the smallest glimmer of hope in regaining his former glory. As many looking to reclaim what once was, you can be the judge on the last panel if he goes overboard. I vote that he has, in all the right ways.