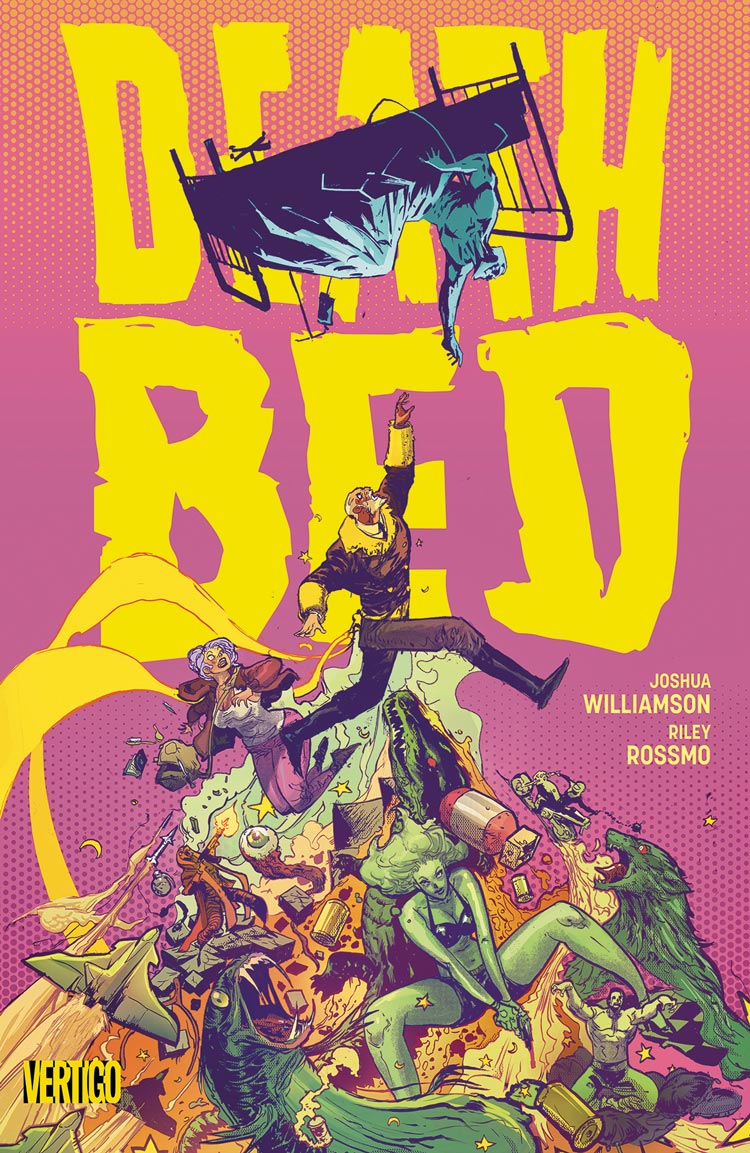 Let me be honest with you all, and no spoilers, but this book is WILD. I want to tell you everything, but I’m trying to keep this spoiler free for all our sake.

Created by writer Joshua Williamson and artist Riley Rossmo, Deathbed follows reporter Valentine Richards as she attempts to chronicle the life of the worlds greatest living adventurer, Antonio Luna, from his deathbed. Or maybe it follows Antonio Luna as he lives out his last days with his unwitting, ghostwriter sidekick Valentine Richards. Which one it actually is will most probably become clear as we get a little further into the story, but both are fine with me.

Valentine Richards is pouty, aggressive, and just generally shitty to all who encounter her. As the subject of the third person narration that runs through the story, she is shown to be chasing the high of a story telling competition she won as a child. Antonio Luna, on the other hand, is an eccentric adventurer currently on his deathbed looking for someone to document a life well lived now that death is upon him. Handsome and charming, it becomes clear fairly quickly that there is a lot more going on with Luna’s life and death than has been made apparent.

Williamson’s writing is… well, it’s all a little tongue in cheek, funny and accessible, but dark all the same. The story itself is engaging, the few twists and turns it provides along with the… let’s says complicated protagonists, will leave you with a taste for more. Each character has a distinct voice, and paired with the third person narration which illustrates exactly how there are two sides to every story, and clarifies the differences between an event encountered and a story retold, makes for an interesting and more importantly fun read.

Paired with creative partner and artist Rossmo, the story more than comes to life. Deathbed is such that even the locations feel a little like characters in the story but none more than Luna’s sprawling house, built by hand and filled with his many treasures. In addition to his stunning backgrounds, Rossmo’s visual characterisation is incredible. He utilizes posture, body language and facial expression to tell us so much about the characters, Val’s closed body language and pout for example, speak volumes without her even needing to open her mouth.

The panel sequence showing Val’s somewhat repetitive lifestyle, paired with her sat on the toilet smoking shows us a little of her desperation to capture something that just out of her reach. What also struck me is that even though Val is presented as curvy and with ample cleavage it doesn’t feel at all sexualised. At least no more than Luna’s broad shoulders or chest while his dick is flopping around — That’s not a spoiler by the way, more a heads up for loose, old man dick. You’re welcome.

Together, Rossmo and Placencia more than set the tone of weird and unsettling before anything particularly weird or unsettling even happens. With Rossmo’s loose, expressive line work providing a perfect base for Ivan Placencia’s predominantly muted palette of blues and greens. He offsets this with the soft glow of candle light which in turn allows for shadows and who knows what else to creep in from the corners of the page. The use of half tones within the work also functions to add an extra layer of depth to some of the more dimly lit panels.

Deathbed is the sort of book that gets me a little bit excited about comics in general, and with the state of comics at the moment that excitement has been hard to come by. Deathbed is fun and weird and entirely unexpected but still earnest and even though there is violence and swearing and full frontal nudity – don’t say I didn’t warn you – it still felt a little like 1980’s action and adventure comfort food for my weary soul.