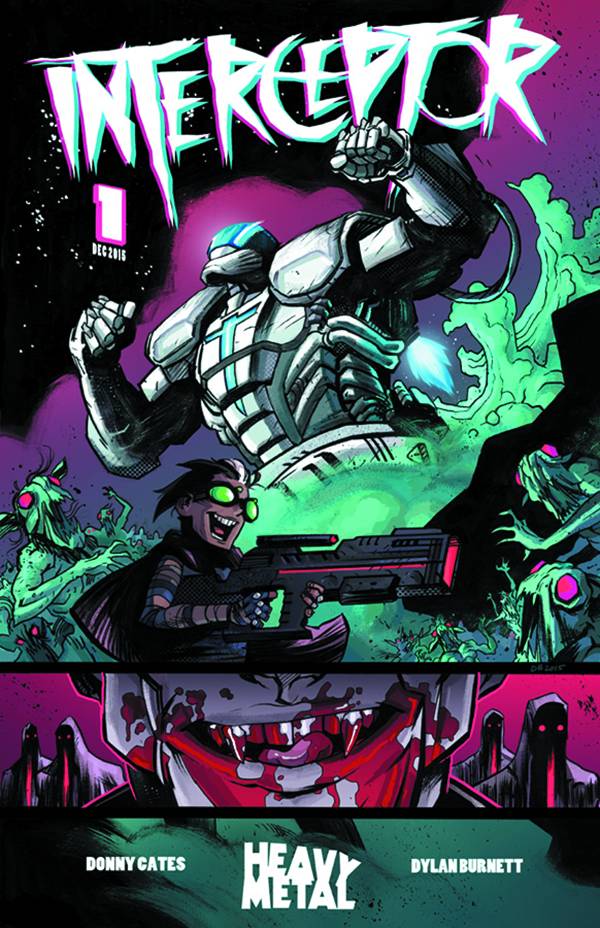 I vant to suck your blood. If I were a vampire, that’d be what I was saying to Interceptor #1. This new series from Donny Cates and Dylan Burnett is so full of tasty, beautifully rendered heart. As an opening issue there is so much life flowing through Interceptor’s veins, it would provide a meal for a horde of space vampires for weeks. Space vampires, you say?

Interceptor is a somewhat political, full-time sci-fi, hilarious romp through a “what if” scenario. You know, “what if” Earth was decimated by human carelessness, overrun by previously hibernating vampires, forcing humans to jump through galaxy-hopping gates? And you know, “what if” Earth was blown to hell by nuclear devastation as most of humankind took off into space and set-up shop on a distant planet called Palus? And totally “what if” Palus, with a newly-minted 65-year old President who looks like a kid, sent a suped-up warrior woman back to Earth, only to find an equally badass girl named Weep fighting against the vampire hordes? Yeah, “what if”.

Interceptor is Donny Cates latest brainchild. As a comic newbie, my first foray into Cates’ work was Buzzkill, and I’ve been hooked ever since. True to form, Cates has a masterful way of jumping into a story headfirst. He finds seamless routes to introduce the basic (yet extremely imaginative) story through dialogue, and gives you just enough to keep you wondering what’s going to happen next. His characters are full of energy, practically bouncing from panel to panel, like they’re just as excited to be a part of the story as Cates is to tell it. The concept itself is incredible entertaining. Already, there are several moving parts that will make this a wonderful sci-fi epic, but it’s grounded in relatable and exciting characters which helps bring the story back to focus. By the end of the issue, I have a lot of questions. Some of them are a little frustratingly unanswered, but most are the perfect kind of gotta-know-what-happens! to get me back for issue two. Interceptor #1 is infused with a cold-blooded sense of action, yet still retains characters ripe with humanity. The dynamics between the players — the worlds — at stake here are incredibly built up for one issue’s work.

Dylan Burnett is a hero. This is one seriously beautiful book. Every page is dripping with vibrant, neon glory in a gorgeous, well-conceived world. Just when you think you’ve seen the most beautiful page, you turn to the next and your jaw drops all over again. I love the use of dot tones in this book, really contrasting the bright colors in a techy-looking way. I could not think of an artist better-suited to tell this story, and I cannot wait to see what the rest of the issues look like. The colors set the tone for this issue so perfectly, wonderfully conveying the futuristic vibes while keeping the story dark in its implications, but light in its execution. The inks are strong, yet let loose at the appropriate times. The characters are easily discernible; the action is high-energy and followable. Burnett keeps the emotions high and the story impactful with his insanely eye-popping art.

Interceptor #1 is a story you don’t want to miss. Heavy Metal has a slate of great comics coming our way, and this first issue is certainly one of them. Donny Cates has concocted yet another compelling story and his talent is matched by Dylan Burnett’s drool-worthy art. Heavy Metal has a hit on their hands with Interceptor, and you will be kicking yourself all the way to the stars if you pass this one up.