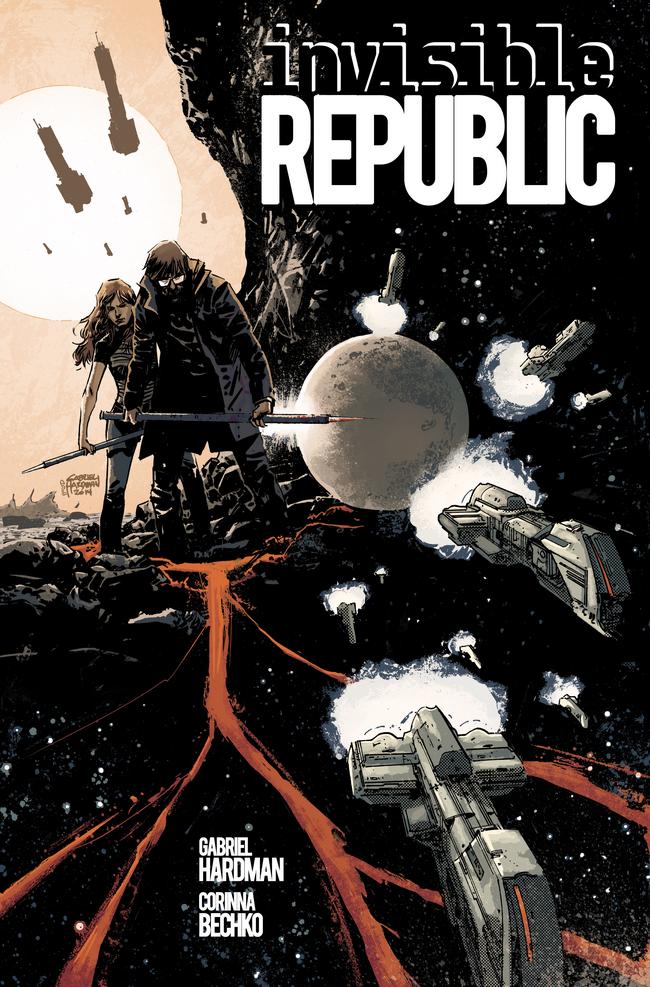 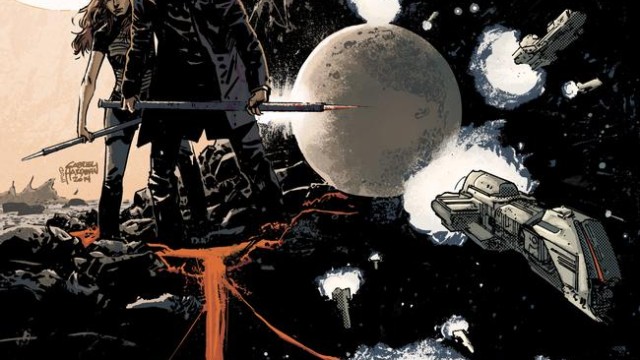 The husband and wife creative team of Gabriel Hardman and Corinna Bechko bring their talents to Image Comics with their new title, Invisible Republic. The gritty, hard piece of science fiction gets off to an intriguing start by playing its cards close to the vest while slowly building the world in which it inhabits. By the time the final page hits the gravitas of what readers just read will hit them, and they will be wondering when they can get their hands on issue two.

Invisible Republic begins on the “remote economic moon” Avalon in the year 2843, as reporter/author Crogger Babb travels his way through the downtrodden streets trying to find people willing to comment on the fall of the Mallory Regime. As he makes his way through the streets the world building is taking place all around with the help of TV, radio reports, and the people on the ground. Not only are conditions on the moon revealed, but more information about our entry level character is revealed by people that recognize him. As for the bigger picture, readers are kept in the dark for the most part on what/who the Mallory Regime was/were, and why they are no longer in power. However, it is shown that whatever happened has left the people on Avalon in dire straits and attempting to flee as refugees. Babb comes across a journal that a woman named Maia Reveron had been writing. As the reporter begins to read through the papers the issue switches gears and takes the readers into the past to tell the story of Maia and her cousin Arthur. As Babb is reading about these exploits it becomes clear that the cousins are main characters in Invisible Republic. Readers are shown that one of the cousins is seemingly transformed by events and this serves as the catlyst that drives the entire series.

Gabriel Hardman has described Invisible Republic as “the visuals of Blade Runner with the narrative ambition of Breaking Bad.” After the first issue you can see where these comparisons are apt. Without spoiling too much it becomes clear that the main characters of this comic will be cousins Maia and Arthur as we follow their journey through Maidstone/Avalon in the past while Babb is reading/figuring out what to do with the pages he found in the present. Once the last page hits and the scope of the series is revealed what appeared to be a slow burn becomes much more interesting in retrospect. The very nature of the comic is going to be highly political, but by keeping their cards close to the chest until the issue’s big reveal, Bechko and Hardman are able to keep their focus on Babb, the political unrest on the ground, and the introduction of the cousins through Maia’s book.

From just one issue it is clear that Hardman and Bechko have lofty ambitions. There is the more grounded, dirty, pulpy side to the story. Then you have political aspect of the book that lies at its heart. Finally there is the classic rise and fall story that has may start small but will have to expand into something larger to keep in line with what is revealed. It will be interesting to see how they balance the different aspects of the storytelling. A big part of this will be how the time will be split between the present day, and the story of Maia and Arthur in the past. Readers aren’t given too much of a sense on how this balance will work, but finding the correct ratio of present day to past may be the key ingredient in the success (or failure?) of Invisible Republic. As for the first issue it is a bit on the slow side, and the mystery behind the importance of Babb’s find keeps readers from caring about the cousins until the very very end of the issue. After finishing the issue it will be rewarding to take some time and read through it again. At this pont certain events that didn’t seem like that big of a deal the first time through take on a greater importance. Not every reader is going to read through the book twice, and not every reader is going to have to. However, there is a sense that by withholding information for the big conclusion, the emotional impact of earlier events are lessened. That is by far my biggest problem with the issue, but it is a problem that isn’t close to being a deal breaker. It still works well, but just not as well as it could have.

Gabriel Hardman is pulling double duty by providing the art while co-writing with Bechko. He is joined by colorist Jordan Boyd and together they set a perfectly pulpy, hard sci-fi tone to the book. There aren’t any flashy futuristic weapons or exotic alien creatures, but rather there are run down slums, dirty people, and only fleeting glimpses of technology. If you know the work of Gabriel Hardman you know that subject matter like this is something he was born to draw, and the comic does, indeed, look beautiful. With all the talk of balance in regards to the story, the same can be said about the art. Hardman is able to capture the slums of Avalon with a pulpy take that really looks like it could be from Blade Runner. The readers didn’t need the TV and radio reports to know that the situation on the ground isn’t good, as Hardman captures hopelessness among the people quite well. As the issue enters the flashback scenes the art work opens up a bit. A lot of this can be attributed to the colors of Jordan Boyd brightening up during the earlier days on Avalon. The contrast between time periods is a great flourish to the art that helps readers differentiate between the two, as well as help juxtapose their living conditions. Readers never have to worry about the art when Gabriel Hardman’s name is on a book, and they definitely don’t need to start now.

I’ve compared aspects of this issue to Breaking Bad and Blade Runner, but after one issue I feel that the most appropriate comparison is to The Godfather II. The use of flashbacks to tell simultaneous stories that intertwine is something that Coppola did with his masterpiece, and what Hardman and Bechko seem to be doing with Invisible Republic. Once I finished the issue and went back through it again there was an exact moment where I felt I was watching the rise of Vito Corelne and the fall of Michael all in one panel. I hope that this technique continues as the series moves forward. With all that said, it’s hard to really tell because the creators can go a number of different ways in terms of structure and focus. It has been quite awhile since I’ve read a first issue that leaves so much in the hands of issue two. This slower opening  is a nice change of pace from the current popularity of packing in and establishing as much as possible into the first issue but if issue two can’t capitalize on the promise set forth here it will be all for naught. If any creative team can live up to that challenge it’s Hardman and Bechko. There might be a few pacing issues, but Invisible Republic is on the cusp of being something special, and I can’t wait to see if it can reach its potential.

Invisible Republic is on sale March 18th. The Final Order Cutoff date is Monday February 23rd. As usual if you want to guarantee yourself a copy make sure to pre-order with your LCS