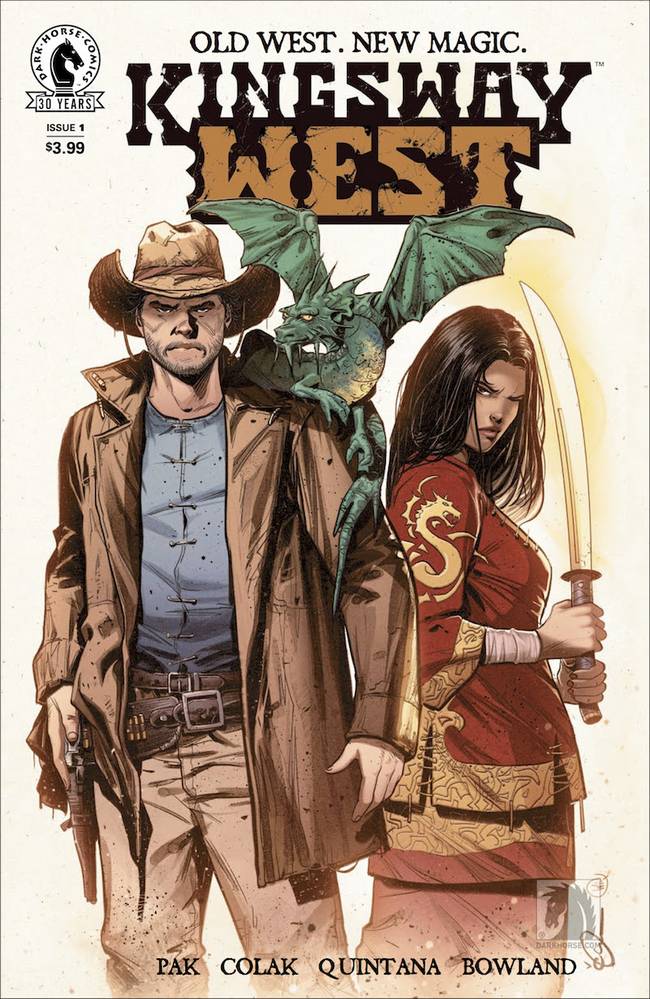 I’m not sure when Kingsway West entered my watch, but I do remember making a distinct mental note of the title with the express notion of reading it, and as happens to be one of the perks of being a Comicositeer, reviewing it. Yes, it is still a few weeks away, but you really should be looking forward to Kingsway West from writer Greg Pak and artist Mirko Colak. Wil Quintana provides the lavish colors and Simon Bowland brings the confident lettering, rounding out Kingsway West #1 into an impressive visual package.

As naturally (but, unfortunately, not commonly) befits a new series, Kingsway West #1 opens with a map of the region. The map identifies Murrieta Territory, the Wild, Golden City, Golden Mountain Empire, and República de los Californios, with a Dead Zone in the middle of it all. Pak explains that the theoretical existence of “Red Gold” – no, not ketchup – allegedly powers “extramundial” phenomena.

From there, the story jumps into 1861. Readers meet Kingsway Law, who makes it very, very clear that he just wants to be left alone. He’s got a gun to assist in that endeavor, but outside forces are resistant to leaving well enough alone. Which brings plenty of gunfire and conflict to the story. Pak also finds areas to explain just enough about the world, but refrains from revealing too much. Red Gold plays into it, guns, swords, gaudy, vibrant outfits, and plenty of cowboy hats. Oh, and there are jackalopes and dragons.

Colak and Quintana provide deft visuals that describe the world as much as Bowland’s captions and Pak’s dialog, salting the story with dust and haze. Law is crafted from whole cloth, a character whose visual description is as important as his narrational backstory. The same holds true for the other characters readers meet in Kingsway West #1: Strode, Doctor Uhrmacher, Ah Toy, Zozo, and Sonia. Law wears brown, Toy is clad in red, the antagonists of the story in green, making for easy delineation in the frequent skirmishes in the story and liberating Colak to draw natural motion and reaction instead of constantly posing characters for recognition throughout. Colak bounces between bordered and borderless panels, giving each image room to transmit a tale, to contribute to the overall flow, and to add to the solid foundation found in Kingsway West #1.

I know I can rely on Greg Pak for entertaining stories, Colak for solid art, Quintana for vibrant, descriptive coloring, and Bowland for masterful lettering, so I had high hopes coming into Kingsway West #1. This creative team met that bar, effortlessly stepped over it, and gave me a story that was thoroughly entertaining and completely engrossing from cover to cover.