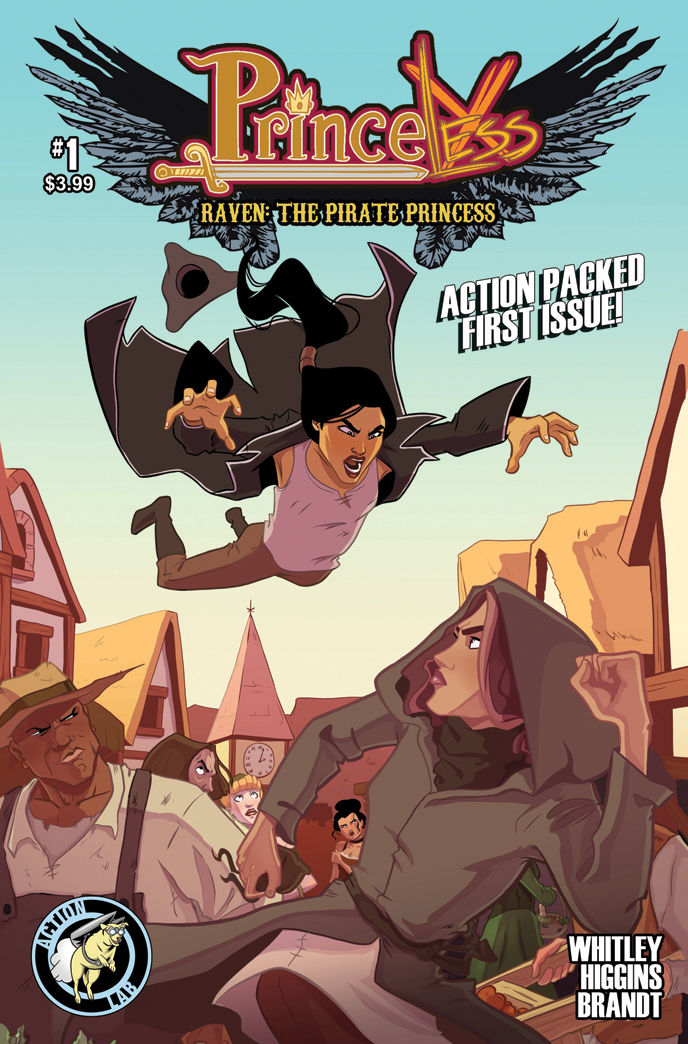 The world of Princeless is expanding with this spin-off comic focusing on Raven Xingtau, pirate princess extraordinaire and true heir to the cutthroat throne. Despite being locked in a tower for years by her power hungry brothers, Raven is free and determined to take back what’s hers — one picked pocket at a time.

The Pirate Princess hooked me the way the first issue of Rat Queens hooked me (which is to say, completely). Whitley has written a delightfully well-rounded character with Raven. She’s clearly a badass with a brain, but she’s also got a heart, a sense of humor, a temper, and a lot to learn. Far from perfect, Raven is easy to identify with and instantly likeable. Not content with just one great character, Whitley made sure to include several other characters with their own personalities, and tossed in some witty banter and an actually-fun-to-read chase sequence for good measure.

Rounding out Whitley’s writing is Higgins’ and Brandt’s on-point artwork. The panels may not be super flashy, but creating characters is where Higgins shines. Her clean lines, consistent facial features, and realistic proportions meld perfectly with her ability to draw a diverse cast of ethnicities, genders, ages, and body types without having to resort to cookie-cutter templates or impractically “sexy” clothing.

Not only were the main characters diverse and individual, even the random background people were diversely drawn and distinct from one another (so much so, that I’m pretty sure she snuck in a Doctor Who easter egg). All in all, The Pirate Princess is full of brilliant work from a fabulous artist.

Comic readers have been calling for more titles that are smart, fun, interesting, and inclusive. The Pirate Princess fits that bill. It’s a great read for anyone who enjoys comics, and I can’t wait to get my hands on the next issue.