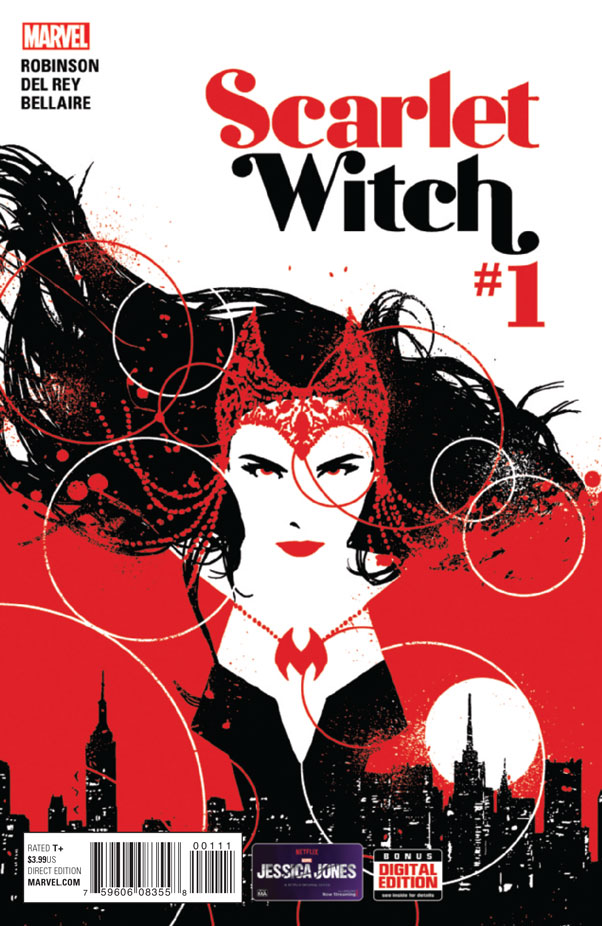 Wanda Maximoff, the Scarlet Witch, has taken to Manhattan, living by herself and watching over the mystical forces of the city. Despite her past, Wanda is adamant about forging a life of her own in the city that never sleeps. Before long, Wanda senses that something has gone awry in the dark and chaotic world of witchcraft and takes up her crimson cowl to uncover the latest magical dilemma.

I was on board since Marvel announced Scarlet Witch, even if I wasn’t sure what to expect out of a solo series for Wanda. After reading this issue, I’m definitely in for the long haul. The art, writing, and exploration of Wanda as an independent character combined to create an enigmatic story sure to bring out the best parts of the character. I feel like this issue is taking Wanda back to her roots and fleshing her out in a way I’m not sure other series have before.

James Robinson writes a snarky and self-assured Wanda. I’m glad he went this route, because a Scarlet Witch solo series could have very easily focused on the sins of her past rather than her capability for changing her life’s direction. Wanda is shown as mystically adept, noticing even slight changes in the pattern of magic around her. Robinson begins to explore her more occult roots, an element of her life that is not often explored. If this issue was any indication, the writing will continue to dive into Wanda’s world of magic to reveal things about her we wouldn’t see in the middle of a team series.

I can’t say enough how much I loved Vanessa Del Rey and Jordie Bellaire on art. Immediately, the visuals felt wispy and ghostlike. Del Rey’s art matches the tone of this issue perfectly. Wanda’s solo adventure is distinct from her time with the Avengers, and Del Rey does her justice through each panel, which takes us deeper into the darkness that surrounds Wanda, but also her prowess as a mystical hero.

Bellaire’s deliberate use of color was important for expressing the murky atmosphere within Scarlet Witch #1. The monotone environment meshes with Wanda’s mysterious role as New York’s new protector. Yet, when there is color, it is vivid and striking, standing out from a shadowy Manhattan. Both Del Rey and Bellaire are the art team we need and deserve to explore this new chapter in Wanda’s life.

I’d most certainly recommend Scarlet Witch #1 to any reader, new or old. If you love Wanda like I do, this was a great change of pace from her stories of late. However, the narrative isn’t one that relies too heavily on canon. This issue seriously felt like a fresh start, so it’s a great point to begin to know Wanda if you’ve never read her or about her. There are subtle nods to her past, but all directions point toward a future as an independent character.