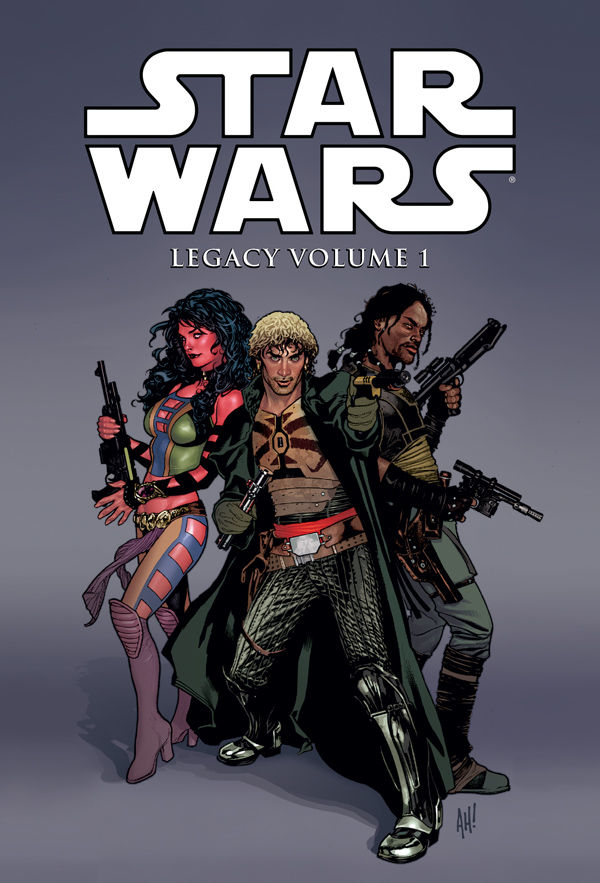 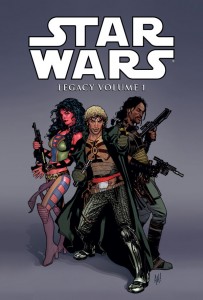 Star Wars Legacy is, without a moment’s doubt, one of the best Star Wars comic book series ever created. Bold words, but when the comics are this good, they are well earned.

Star Wars Legacy: Volume 1 HC collects the first three arcs of the series, set 137 years after the events of Episode IV: A New Hope. John Ostrander and Jan Duursema blazed trails in an uncharted period of time with this series, and set the bar remarkably high for any successors. For those unfamiliar with the story of Legacy, this hardcover edition is an absolutely fabulous way to jump into the series. It bundles three volumes of the trade paperback for nearly 400 pages of story, with roughly 40 pages of extras and galaxy guides to keep the Star Wars Universe straight in this time period. Ostrander and Duursema craft a story with all the appeal of the original series in Legacy, with a brash unpredictability that makes this story fresh and unique. Cade Skywalker, descendant of Luke Skywalker, is a nomad and a rogue that puts Han Solo to shame. The wild nature of his character, and his raw power, makes Legacy an interesting thrillride from the first page to the last of this volume. Darth Krayt, tyrant of the galaxy, rivals Lord Vader in sheer imposing darkness: a tormented and broken soul looking to impose his iron fist of control upon the entire galaxy. All the right elements for an epic space adventure are on the board with this series, and Ostrander and Duursema know just the right time to move players around to keep this story action packed and pedal to the metal. I’ve read a lot of Star Wars comics over the years, and none of them capture the energy and excitement of the Star Wars Universe quite like Legacy. This hardcover collection contains three story arcs that are a master-class in how to make a compelling Star Wars story.

The story is strong, but the art is what makes this collection soar. Jan Duursema is a talent that Dark Horse editorial needs to be praised for pairing with John Ostrander on these books because she makes magic happen. Duursema’s art brings this future-world to life and her style is the perfect fit for a Star Wars comic (which makes sense considering how many she has worked on over the years). The action sequences of this collection are electric and her angles for lightsaber battles and force powers are excellent at conveying what is occurring. This is as good as it gets for Star Wars art, folks.

Star Wars Legacy is a great marriage of excellent script and impeccable visuals and should not be missed by any Star Wars fan.