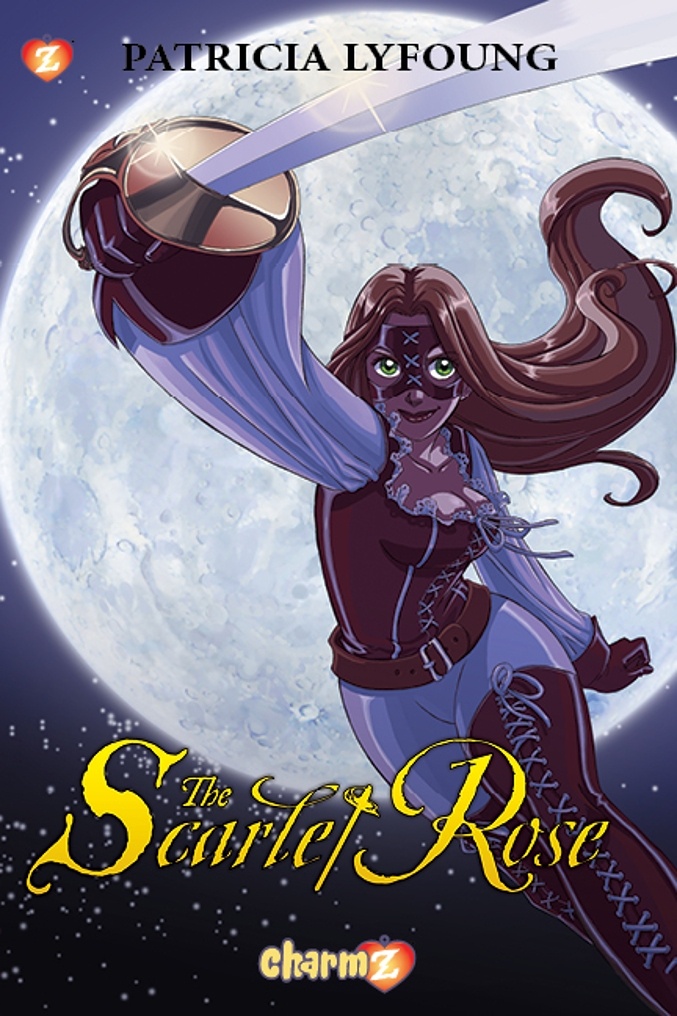 Will you have your revenge?

Maud DeLaroche is suddenly thrust from her common life as the daughter of a smithy to that of an aristocrat’s granddaughter by a heartbreaking but fortuitous event. She navigates the high life at her own volition, though often coming up against the expectations others have for her as a young woman. Still, she is determined to be who she is and to be an agent of justice, no matter what twists and turns she faces.

The Scarlet Rose is a straightforward adventure comic focusing on a young woman’s attempt to eschew gender norms and French aristocratic society. Every one of Maud’s actions is filled with enthusiasm and a drive that enliven the story. Though she does not experience much growth through this first volume, she does change in a manner that is in line with her values. As the Scarlet Rose, Maud endeavors to even the scales of justice, and that aspect of her shines through every page.

Patricia Lyfoung casts Maud as ever determined. Though we can easily see the trajectory of each of her actions they do not feel forced, contrived, or unnecessary. Lyfoung’s writing captures the protagonist’s spirit and at every moment she is true to herself. The characters fit many archetypes of stories regarding women in classical eras: the helpful handmaiden, the stern but “well-meaning” grandfather, the cast of nobles who decry Maud’s refusal to conform, and the mysterious gentleman whom we are sure we have seen before. These characters could easily cross over into less than stellar territory, but Lyfoung gives them the kind of energy befitting the story and its likely audience.

The story’s pace seems to move at breakneck speed. There are advantages to this style of writing, like quickly getting to the point and climax of an arc, though many developments seem to happen quickly with less exploration. The value of Lyfoung’s writing is in the characters, who help the story along even with its quick development. Given that we are getting this translation just shy over a decade from its publication in France, I am curious as to what develops for Maud, as the larger story has many more volumes ready and waiting to arise in the States.

Lyfoung is at the helm of some of the art as well. It doesn’t take much to see influences from her previous work in animation on the characters and style of the series. Like many Western series that seem to draw on some of the energy from anime and manga, there is a keen sense of attention to emphasis and intense emotion. Lyfoung also puts an immense amount of detail in every scene, getting many of the notes of an older France though matters of dress and environment. Some of the posing for Maud, especially after she dons her costume, approaches back breaking, but other than these instances, the bodies are well drawn in terms of shape and perspective.

Phillipe Ogaki colors a French countryside lit by candlelight, its nights illuminated by moonlight. Maud’s world is represented by idyllic scenes and colors befitting her sudden stature, as many of the manors and castles are pristine and towering. Ogaki’s style for this series helps it to feel more real, as it is a story that is not too much of a departure from reality. A larger mystery is slowly building, but it still takes factual elements from that time in history to contextualize the story, aided by Ogaki’s use of warmth and grounded colors.

At some points in the story, I was left wondering regarding Maud’s status as a woman of color. Throughout the comic, she looks like everyone else around her, which is a reality for many multiracial people, but also an element which can end up narratively lacking. Lyfoung touches on her heritage by discussing the taboo nature of her father’s relationship with her mother, which lead to him being cast out of his family, but other than this part of her history there is little to no mention of who she is. More references to her background would have helped hone in on this part of her and did not have to include oppression or marginalization beyond what she experiences. This may be touched upon in the future, as we have hints regarding the other parts of her family history, but the minimal references to her race and ethnicity left me wanting this to be explored.

The Scarlet Rose is a simple and adventurous story of romance and independence. The creative team uses historical and cultural context to discuss an issue common in many stories about women, heroism, and justice. Maud is a fun protagonist through which to view the series and she finds a way to counter any barrier thrown in her path. This comic is great for classrooms, kids, or just a nice afternoon of adventure, romance, and vigilantes. There seems to be more in store and I’m wondering what’s in store for our hero, the Scarlet Rose.