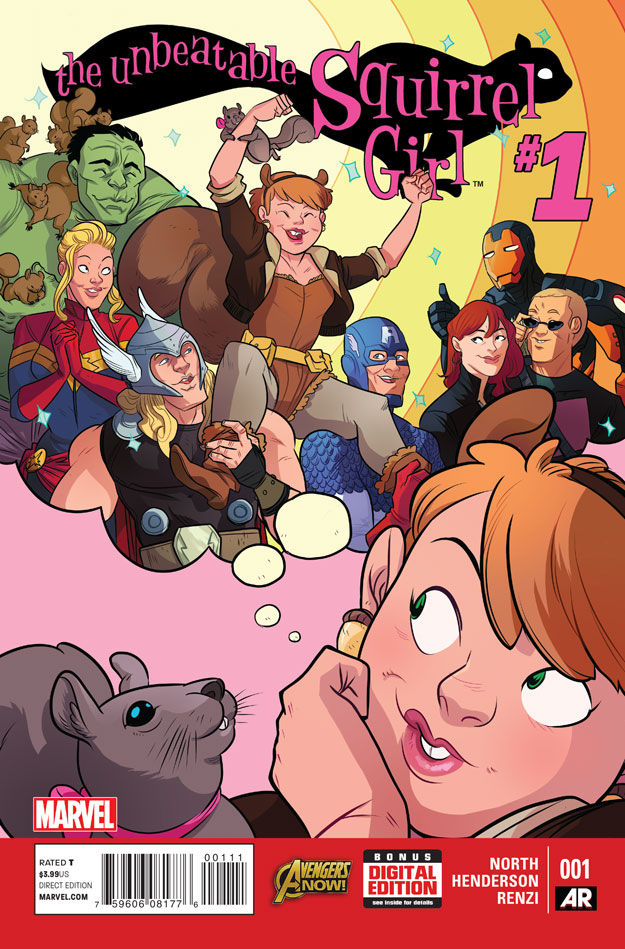 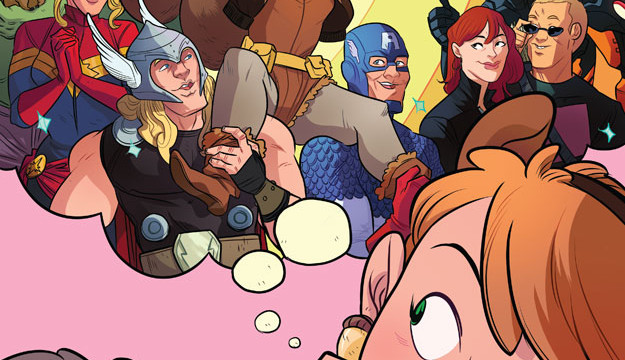 OK, I’ll throw in a few more words. How about super-fun? Or unexpected? Or laugh-out-loud funny?

Some of those are compounds.

But the real deal is, The Unbeatable Squirrel Girl #1 is a book I think will appeal to a larger segment of readers who may not always find what they’re looking for in Big Two super-hero comics. Like similar efforts with Harley Quinn, the new Batgirl team, She-Hulk, and last year’s FF comic, Squirrel Girl is poised to bring humor and adventure to the Marvel Universe without losing sight of having heart at its center.

Ryan North, in fact, does an exemplary job right off giving the reader a compelling protagonist in Doreen Green, new college student, roommate, and friend to squirrels everywhere. Here we have an eternal optimist, determined to stay in the super-hero game just to help people, but wanting to better her own self along the way.

Like Silver Age do-gooders of years gone past, Doreen shares with the readers an internal monologue throughout. Unlike comics in years past, there’s little self-awareness to this endeavor, as Squirrel Girl pretty much announces everything she’s thinking as she thinks it, as if in a bubble of her own conversation — or conversation with her best friend, Tippy-Toe the Squirrel. What should be disconcerting and a bit maddening is actually pretty endearing in practice, as we get a hero who wears her heart on her sleeve, but is surprisingly effective nonetheless.

The real treat, though, is Erica Henderson’s rendering of Squirrel Girl both in and out of costume as a woman of ample means. Far from our standard stick figure bombshells, Doreen is a normal woman, who just happens to have buckteeth and a huge bushy tail (which becomes a “conspicuously large and conspicuously awesome butt.” Try that with Elektra and see how far you get.). And her body language and movements read as a woman who is a competent, muscular gymnast, and not afraid to leverage the power in her own physical presence.

In short, she’s a healthy-looking woman who feels good about herself. And how many female characters in comics fall into that category?

Rico Renzi delivers a fun, solid palette of soft colors to meet Henderson’s clean, energetic line. The pair don’t shackle themselves to realism in any sense, but neither do they ever let you forget that the moments between Doreen and Tippy-Toe (or Doreen and her new roommate) are as important as the confrontation with this issue’s guest villain.

A bold new addition to the Marvel stable that is certain to turn heads and elicit smiles, The Unbeatable Squirrel Girl #1 is a great move on the publisher’s part to reach out to different sensibilities and different demographics with its wide universe of characters. Squirrel Girl may not be able to save the universe (or maybe she can!), but she can definitely capture our hearts lickity-split.