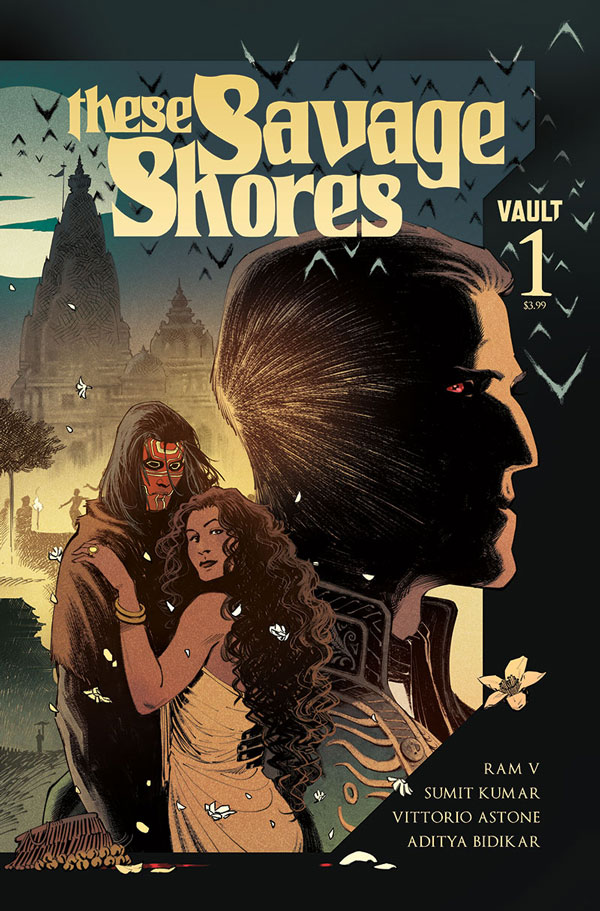 These Savage Shores is dark, forebodingly violent, thought provoking, and full of potential.

Set during the time of European expansion, These Savage Shores tells the story of Alain Pierrefont, an English noble and vampire, and Bishan, a native, vaguely supernatural being who safeguards the Prince of Calicut. The two are brought into contention with each other after Alain is forced to seek refuge in Calicut post-exile from England for his vampiric tendencies and begins working with the infamous, East India Company. Bishan, already leery of the Company, watches Alain and waits for any reason to pick a fight. Needless to say, Alain gives him one.

The book wastes no time in setting up the central thematic conflict of the series by using the socio-political turmoil of the European expansion to highlight the budding conflict between Bishan and Pierrefont. In one corner you have Bishan, a native of Calicut and is focused on protecting his land and his charge, the Prince of his region. In the other, Pierrefont, an envoy of the malignant East India Company, whose signature move is pillaging any land where they anchor for its resources, and is a vampire – the universal literary symbol for a parasite. These two have been aligned by writer Ram V perfectly to be delightfully violent enemies. Just look at the last page.

But again, Ram’s story greatest strength is its allegory. The blood that is shed between Pierrefont and Bishan will be the crux of book but Ram has created ample narrative space to speak about colonialism and use the story to illustrate how damaging, vile, and, of course, savage this time was in history. This allows the books to stand apart from anything else that is on the market.

Sumit Kumar and Vittoria Astone capture the ambiance of Ram’s script excellently. Astone colors Bishan and Calicut with warm, earthy tones while depicting Pierrefont and his vampiric escapades with a dark blue overtones and plenty of shadows. Kumar then uses the paneling to capture the tense, foreboding vibe of the book. For example, all of Pierrefont’s seen are shown in claustrophobic and rapid quick cuts before a final, generally violent, reveal while Bishan’s panels with his lover, are shown in wide, calming shots.

These Savage Shores #1 is an excellent start to a very promising series. It features vampires and the supernatural warring for their soul of a foreign land, set to a real-world backdrop of European colonialism. Complete with action, drama, and legitimate historical commentary, These Savage Shores is a testament to how thoughtful and exciting comic books can be. Go out of your way to read this book.