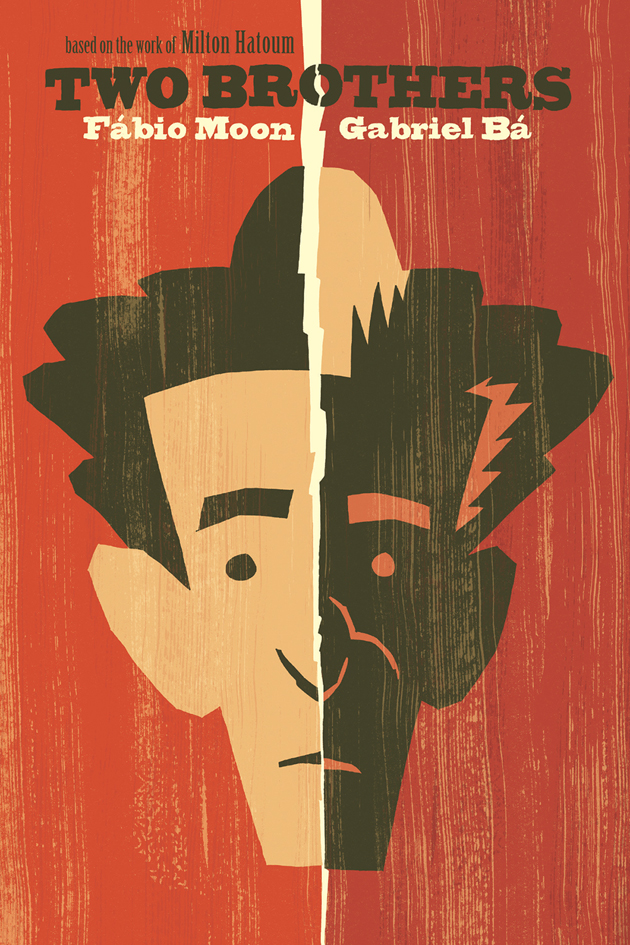 TWO BROTHERS
Based on The Brothers, a novel by Milton Hatoum
Adapted by Fábio Moon and Gabriel Bá
Published by Dark Horse Comics
Release Date: October 14, 2015

In June of last year, about a month and a half before I would disappear to a different country, I told my sister never to speak to me again. It was over the phone, rather than face to face. My friend had to sit and pretend not to listen while I shouted obscenities into the speaker and then promptly hung up, only to burst into furious tears a second later.

My parents couldn’t understand it, couldn’t accept it. I don’t remember how they found out. I didn’t tell them what had happened, but I did tell my cousin, and so I can only assume that word got round to them that way. My mother was crushed. Our family was going through something of a dark period and, in her mind, life was too short for my sister and I not to be speaking to each other.  Meanwhile, my father just couldn’t wrap his head around a fight so big that it ended in silence. In his mind, the whole thing had been sparked by a misunderstanding and, now that the misunderstanding was apparent to us both, the fight should be over—water under the bridge.

Of course, this was all much less to do with the particular fight and much more to do with the twenty-plus years that came before. Yes, the building came down with a boom and a crash and choking clouds of dust, but in truth, the infrastructure had been collapsing and the foundations crumbling for some twenty years.

This is what Two Brothers is about.

Twin Lebanese-Brazilian brothers, Yaqub and Omar, do eventually have a catastrophic knockdown, drag-out, but the story is really about everything that led to that moment — for them, and the rest of their family.

Anyone who has a difficult relationship with a family member can empathize; it’s never just the one thing. The devil is in the details. Two Brothers dissects these details, takes the threads of the family apart one by one and examines how they fit together. Indeed, the main push of the story is about the brothers’ feud, but it’s also about their father’s changing relationship with his wife, their housekeeper’s loneliness, their mother’s fear, their sister’s independence. Yaqub and Omar are the anchor points for a wider exploration of the whole family.

The storytelling itself is interestingly fractured. We move around in time and space, shift from character to character, but the story still feels like a cohesive, forward-moving whole. It’s an excellent structural choice, because it lays out, on a macro scale, how these broken relationships are rarely a matter of A leading to B leading to C, but instead several parts moving both against and with each other. 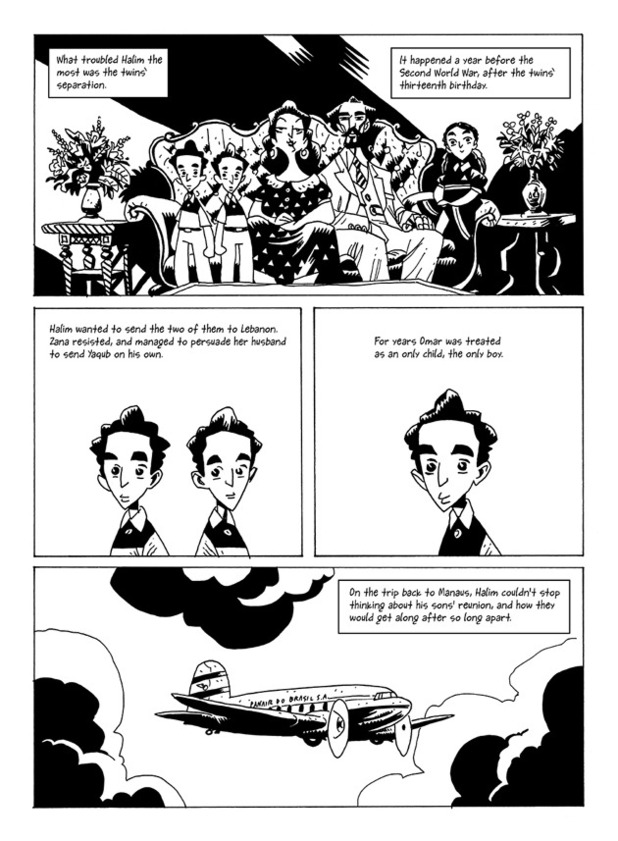 Each new perspective, each transport in time, each episode colors the reader’s understanding in a different way. Even the narrator is not a neutral party, but instead someone who is directly involved and has their own stakes in the story of Yaqub and Omar. It’s a solid rejection (by the original novelist, Milton Hatoum, as this was part of how he structured his prose) of any attempts to look at the family objectively. The truths, the motivations, the mistakes—they’re all relative and contingent. No one is truly at fault and everyone is to blame.

Narratively, structurally, thematically–it’s one of the better depictions of how things fracture and specifically, how we have a bad habit of relating to others based on who they were when we met them, rather than who they are now. With the exception of the narrator, who is largely sympathetic, each of the characters is shown as being neither wholly good nor wholly bad. Instead, as in real life, they are responding to circumstances that are largely out of their control, things that are not intended to hurt but do anyway. That kind of reality is hard to capture and one of the standout features of the book.

I admit, though, that I was disappointed by the depiction of women in the comic. Many will say that I should have known what to expect in a story called Two Brothers, but I have always argued (and will always argue) that there are ways to examine the lives and interactions of men without either erasing women or relying on stereotypes. Though we get a small amount of background on the housekeeper, there is relatively little insight into Yaqub and Omar’s sister and their mother, Zana, is a fairly classic overbearing mother with little nuance.

There’s some explanation for how she becomes this way, but on the whole, it reads much more flatly as compared to the surrounding cast. Overbearing mothers certainly exist, but where male characters were given personal context for their bad or hurtful decisions, Zana’s often seemed like a consequence of her gender. Her character felt cheap, a caricature of what mothers do to their sons rather than what this specific mother did to these specific sons.

Of course, there’s an argument to be had about whether I can lay this at Bá and Moon’s feet, given this is an adaptation of Hatoum’s book. I wouldn’t be surprised if the original text contained this flaw, given how common this is to depictions of women (and especially depictions of women as written by men). Can I fault the adaptors of a work for not addressing a problem in the source material? What responsibilities does one have when adapting a work — is it only to make sure the story translates well to the new medium? Is it permissible for one to change story elements for in an adaptation for reasons beyond structure? And if changes are made, when does it stop being an adaptation and start becoming something else?

For my part, I do hold Bá and Moon accountable. It’s their names on the front of the book and whatever credit they get for the story’s successes, so also they must take for the story’s missteps. With adaptations in particular, creators are in a unique position to be able to correct some of these mistakes. We see this happen all the time in media—Peter Jackson’s choice to include people of color in Laketown, Alex Garland’s centering of Dredd on Judge Anderson rather than the eponymous Judge Dredd.

There was plenty of room in the narrative to better characterize Zana, to do better for the women in general, without changing any themes or the overall shape of the story. Bá and Moon even had the benefit of a living author to whom they could ask questions, if there are concerns about changing the narrative without his permission. The opportunity for a better female characters—and really, a better story—absolutely existed and it’s a shame it didn’t come to pass, given how many pains were taken to humanize the flaws of male characters. 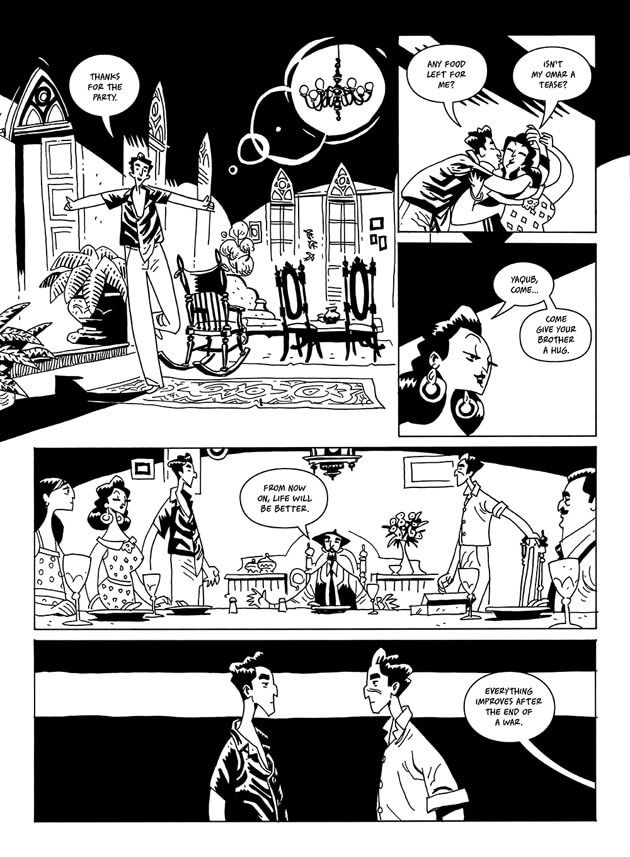 The book is also an interesting read as someone with a different framework for racial identity. The author of the original text is Lebanese Brazilian and Bá and Moon themselves are Brazilian twin brothers. Brazil is home to the largest number of Lebanese diaspora (some 7 million, according to a government census) who, in my (very cursory) research, largely seem to identify as white. As a result, almost all of the characters who appear in the comic are drawn without pigment—including the Indian housekeeper and her son.

However, later on we have the brief appearance of a black character, basically the only character depicted with pigment—and also a sex worker, who is more plot point than person. I’m not sure what to make of this, given my unfamiliarity with the specifics of racial politics in Brazil, but from the little I’ve read—I say again: it is interesting.

The art is black and white, which means the book leans heavily on shadow for atmosphere. (I’m thinking now that the starkness is an interesting choice, given how the narrative seems to be directing readers to the point that family issues are rarely black and white.) It largely works very well and drives home many of the book’s more tragic moments. As valuable as color is to communicate emotion, there’s something to be said for a command of darkness and light. Bá and Moon are really effective when it comes to expressing intense emotion—whether anger or sadness.

The style is also very accessible, feels “family friendly,” which is oddly appropriate to the content despite the handling of adult themes.  My main criticism — and it is a small one—is that it was sometimes difficult, early in the text, to tell which twin was doing what without a second read. Usually context was enough, but every now and again I think I could’ve benefited from a tiny handhold. Otherwise, the style worked well with the material and gave it a unique character.

Two Brothers was a good read, especially as someone who as experienced decades long—well, sibling rivalry doesn’t quite seem like the right phrase. For me, it echoed a lot of the misunderstandings and past hurts I experienced in my own family. There’s something remarkable—something painfully relatable — in watching two siblings insist that the other is the favorite, watching two people from the same environment interpret the same events radically differently.  When my sister and I eventually made up, several months later, I said to her that it seemed she was angry at me for something I’d done, but couldn’t remember.

And, of course — she felt the same.