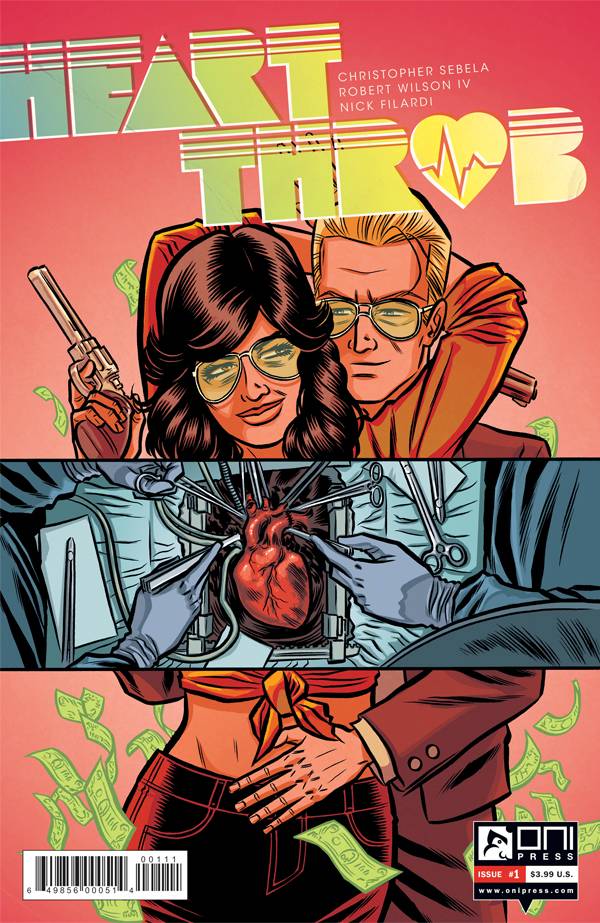 The idea of phantom impressions, personalities and desires from transplanted body parts takes on a 70s crime twist in this new project from Christopher Sebela, Robert Wilson IV and Nick Filardi. The project has been in the works for several years now. Sebela is known for stories with a crime and noir bent, with series such as High Crimes and Dead Letters.  Wilson is no stranger to gritty and emotionally charged stories, with the Penny Rolle concentrated issue of Bitch Planet in his portfolio. Now the two are bringing their diverse crime story experience together. Their book Heartthrob hits stores this April.

The book tells the story of Callie Boudreau and the emotional, as well as criminal, journey, after a heart transplant. The concept plays off reports of people who’ve undergone personality changes after transplants. Like many first issues, it is exposition heavy, by portraying the tedious life Callie was forced to live before her transplant, as well as the painful physical conditions afterward. However, instead of laying down sheets of dialogue and text, much of this background is told directly through the art.

Wilson’s deceptively simple, but actually detailed, art style hinges on geometric points that draw your eye to expressive faces. Heavy ink outlines give each page a sense of weight that Nick Filardi paints with the brown-orange-tan pallets as well as other subdued colors the reflect the story’s era. Multiple layers of shadowing are visible, yet still retaining the solid feel of the colors. Combined with feathered hair, an abundance of smokers, and styles that leap of the page as polyester cut clothes the reader is quickly transported to the late 1970s.

There is an emotional connection to the panel layouts as well. The cut-out of the heart surgery on the cover provides a slight clue to this. After you’ve read the story, take time to go back and look at the moments where the art bleeds off the page. Most pages have the traditional panels with gutters. However, key elements and interactions cause the panel to take over the borders. The intensity of the character reactions is ramped up by these choice. It’s not distracting, nor does the change up take you out of the story. In fact, it took multiple readings and active thought about paneling before the connection between the emotional reaction I was having and the layouts that awareness became clear. Another game to play after completing the first reading, and meeting all the characters, is to go back through and spot the background clues you might have missed before. They’re there, just waiting.

Sebela’s dialogue and Wilson’s emotional facial expressions are seamless on the page. Physical pain, boredom, sarcasm, despair, rage are all clean and clear. Sebela is known for keeping his characters moving with an inner monologue that explains their lives in a succinct fashion. It’s an noir element that he has used in other series and blends well here, without making the story feel like a niche genre component. Setting the story in the 70s helps to simplify things as well. It forces the reader as well as the story to focus on the characters at play. It’s hard to talk a lot about the story without spoiling the initial hook. There isn’t just much mystery to the plot, which is different for a Sebela story. In his other projects he’s usually leaves an obvious question unanswered to draw readers to the next issue. However, Heartthrob draws readers back with an easy to relate to plight in Callie’s life.

While most people do not need a major organ transplant, they can find kinship in her struggle against the machinery of society. Callie shows us the monotony of daily existence, the regrets coming from playing it safe, use and abuse by those we thought we were closest to, and the desire to tell the world where they can stick their demands. These are the struggles of every human throughout time. Heartthrob explores these things with fascinating direction that does not linger or drag the reader down. Of course there is a cliffhanger that will leave you wanting to know what happens next. The clear cut story and gorgeous, clean art make this an easy read that transplants itself into your head, telling you to read it just once more.

You can preorder a copy of Heartthrob from your local comic shop before March 13th, using Diamond Order Code: FEB161671.