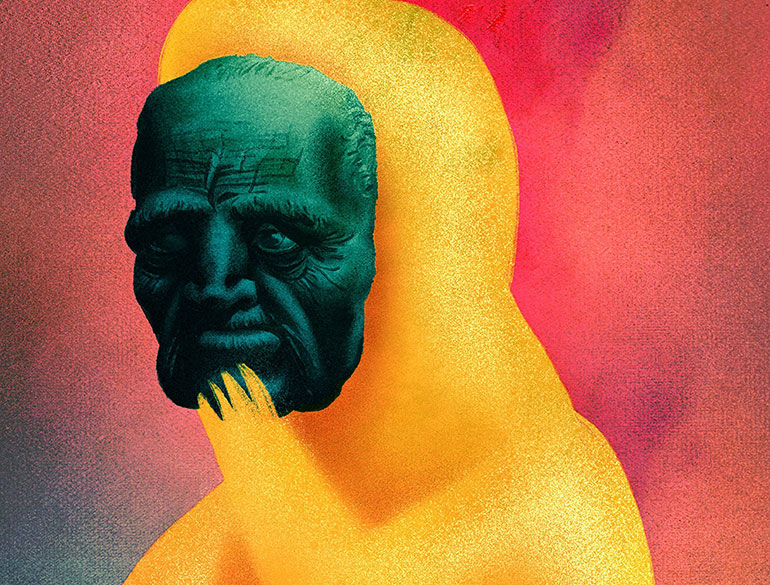 Ezra Claytan Daniels is comics creation in the 21st-century.

From his self-published debut sci-fi comic The Changers and his mini comic Are You At Risk for Empathy Myopia? to his Upgrade Soul and his cocreations BTTM FDRS (with Ben Passmore) and the Afrofuturist animation The Golden Chain (with Adebukola Bodunrin), Ezra has been redefining the art of storytelling.

Indeed, in his Dwayne McDuffie award-winning Upgrade Soul he not only takes readers somewhere completely new in the genre of sci-fi, body-horror, but he also radically innovates the digital comics experience itself. Working closely with software developer Erik Loyer on Upgrade Soul, Ezra creates a new way to experience comics. In other collaborations, Ezra has created new multisensorial convergences — including Upgrade Soul — as soundspace.

Ezra’s clearing of a creative convergence in and around comics is total. As he so gracefully lays out in “Digital Comics Manifesto”, his comics seek to fully explore and innovate storytelling technologies and build storyworlds that vitally open us to new ways seeing, feeling, and thinking about the world. His storyworlds push formal storytelling constraints, critique today’s greed-driven, divide-and-conquer socioeconomic systems, and show us how we might use our hypothetical and empathic capacities to materially transform the world into a better place tomorrow. 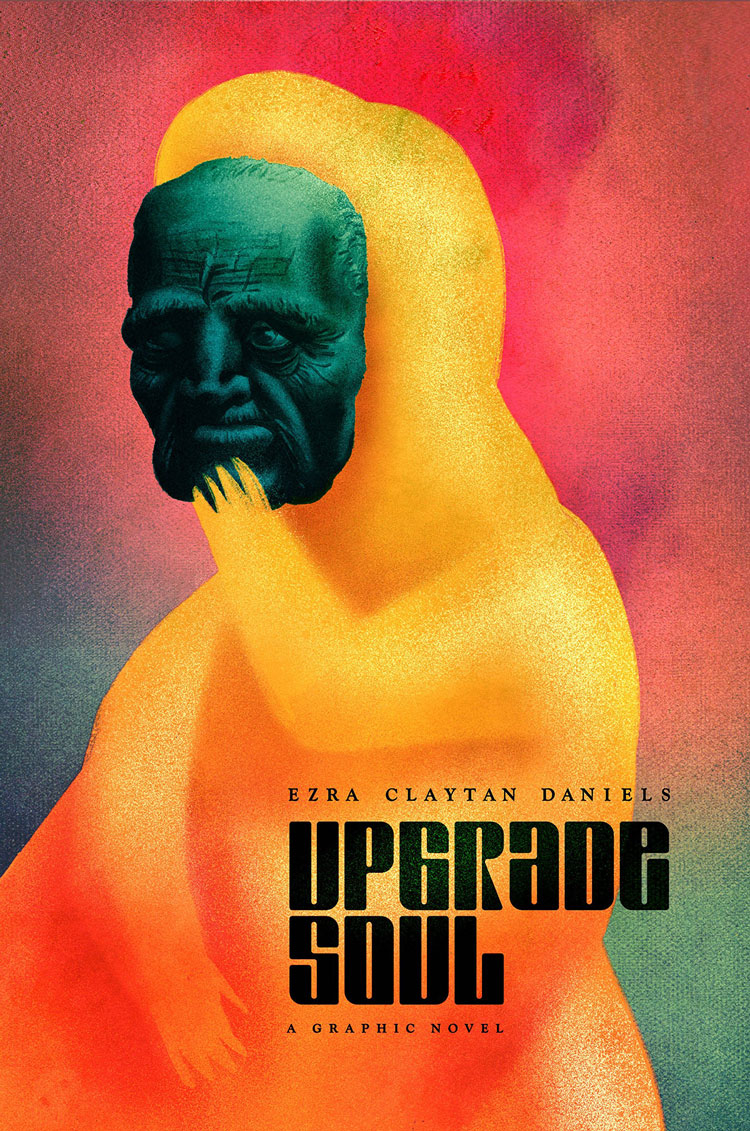 Frederick Luis Aldama:  If we crack open Upgrade Soul to pages 86 and 87, might you share insight into decisions made about narrative pacing, layout, color palette, perspective, framing, and other elements in the shaping of the story?

Ezra Claytan Daniels:  There was an overarching constraint in the design of Upgrade Soul. The story was originally developed for iOS. That is, I designed the story to be viewed and read on an iPad. Every page had to be cut in half.  Even in the physical book you’ll notice every page is divided in half, right down the center horizontally. It’s two iPad screens stacked on top of each other. As a result, I tended to create horizontal, more cinematic wide screen panels.

FLA:  Did working within this design constraint present any problems? I’m thinking of how this half-page scheme might not allow you to create a splash page.

ECD:  The pacing of Upgrade Soul is not very conducive to the splash page.  The whole pace is very staid and very controlled, so even if I could have created a splash page, it wouldn’t quite feel right.

FLA: You bring a cinematic style to your visual storytelling.

Instead of having the text bubbles at the top of a panel as seen in a lot of comics, I have them flow around the characters. If you took the word bubbles out of the first panel at the top of page 86, you might think of this less as informed by the language of comics and more that of cinematography with its use of depth of field and balanced composition.

Think: Hitchcockian static shot composition where the camera is static in space, pointing at the same direction, and all the drama comes from the way the characters move around the space rather than trying to create drama superficially with shot compositions or dramatic camera angles. (I specifically reference Christian Mungiu’s film 4 Months, 3 Weeks, and 2 Days that also uses this static-shot approach.)

This approach to Upgrade Soul forced me to focus more on the gesture and facial expressions of the characters to create drama. 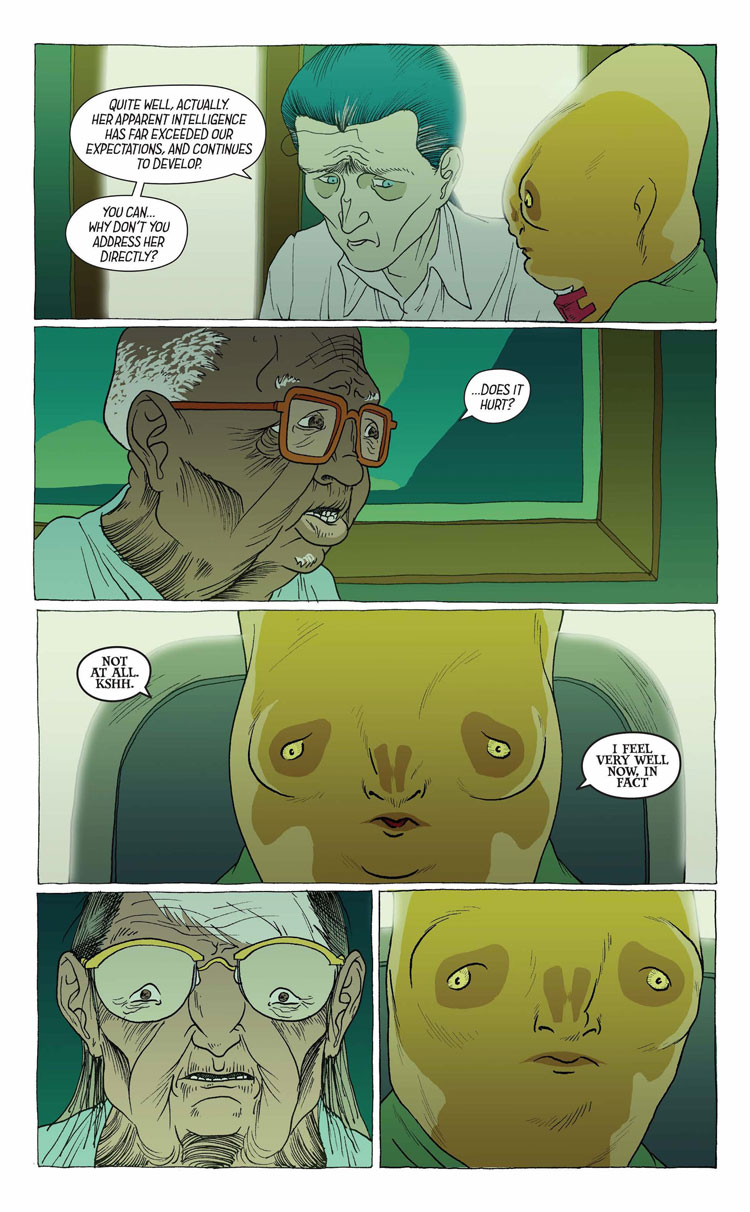 FLA: There’s something deeply unsettling, even horrific in these pages — and in Upgrade Soul generally.

ECD: You’ll see on these two pages something I avoid throughout Upgrade Soul: the conventional techniques of horror comics, with distress patterns and expressive brushwork. I wanted to create a sense of horror by other means. Body horror sci-fi has been a big influence.

You’ll also see that I don’t use any black. I don’t hide anything in shadows, like you would see in a typical horror comic. I wanted to force myself to come up with other ways to create that horror feel, and also to unsettle the reader because nothing is ever hidden. Everything is always on full display.

FLA:  Tell me about your decisions concerning colors.

ECD:  This is the first comic that I did in full color, so I had to create an approach to color theory from scratch.  My background is in graphic design and illustration, so I had experience creating color palettes for pieces, but this was the first time I set out to use colors to a narrative effect. I created a palette of 16 basic colors.

In a way, the color palette was my interpretation of a basic Crayola set, bringing a little bit to my personal taste in the tweaking of say a red or a blue. Using Photoshop, for each scene I did a multiply transparency layer with another color to make all these colors.

For a scene that takes place in a dark room I would have that 16-color palette, and then on top of that I would put a transparent layer of another color to tweak all those colors even more, but on the same exact level in every way, so that I created a different feel for each scene.  I had 16 colors and 10 different transparency layers for flashback scenes at night or outdoors and cloudy. 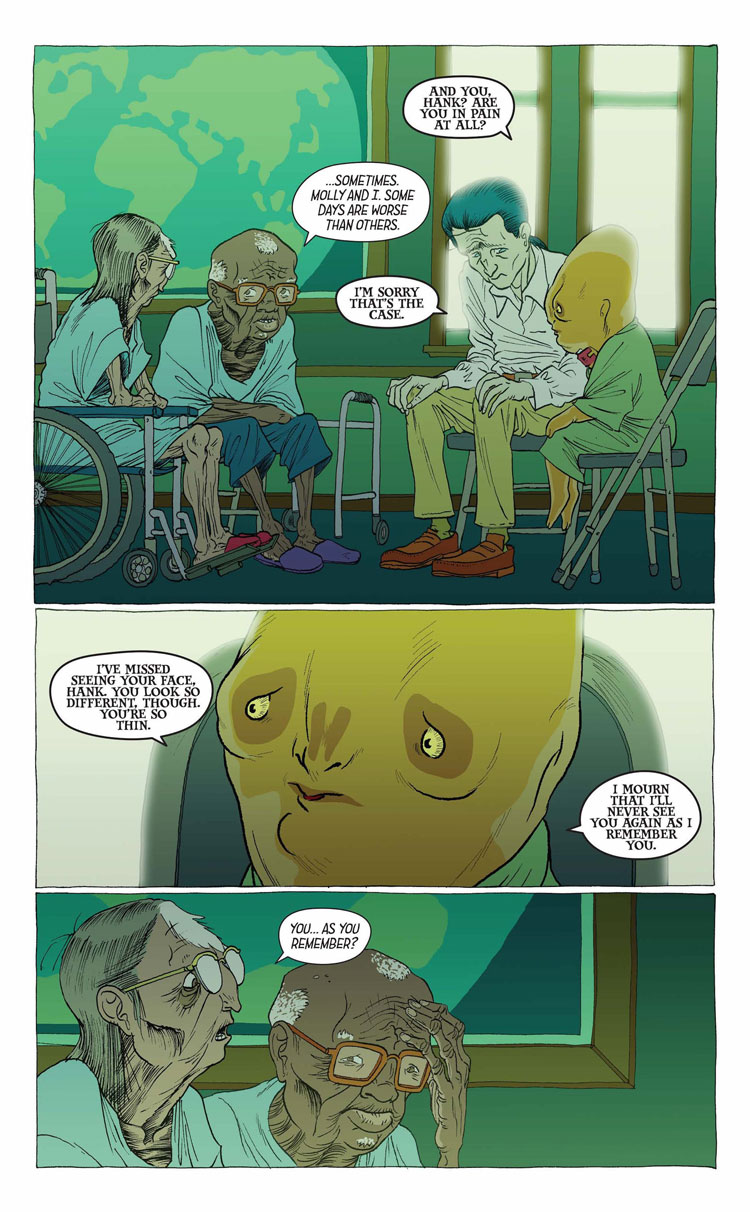 FLA:  Can you speak to your line work?

ECD:  I’d come from a technical and medical illustration background, so everything was designed to be very sterile looking.  I wanted to go with a really clean-line aesthetic.  For inspiration, I looked to Vittorio Giardano’s A Jew in Communist Prague (1997) and other European comics of that era.

And, because I made the decision to not have any black fields, there’s no shading on any of the characters.  It’s all very, very flat and clear.

FLA: Thank you Ezra for sharing these great insights into your creative process!

You can learn more about Ezra and his work at his website: http://www.ezracdaniels.com/