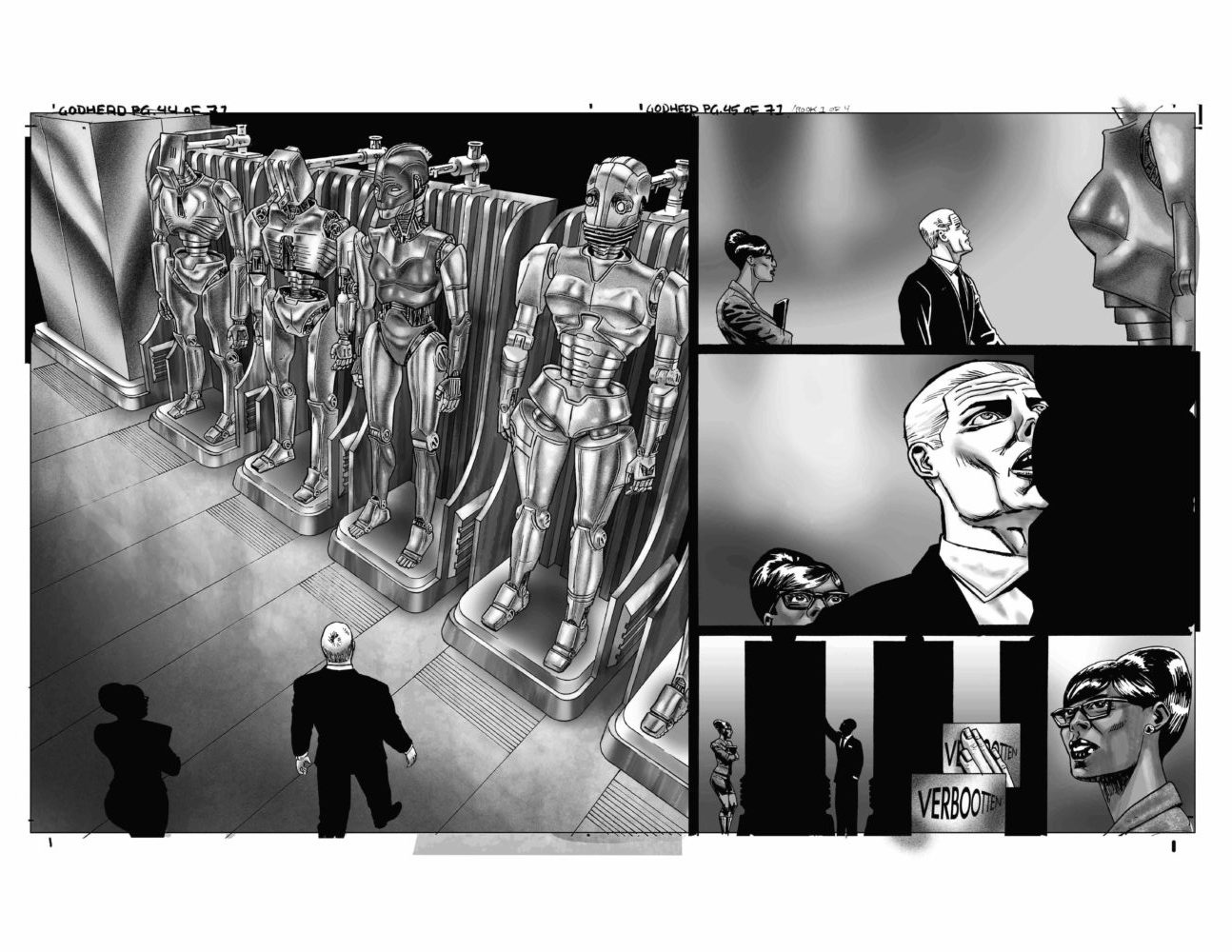 For this “Anatomy of a Panel” Ho Che graciously gifted his time to take me on a journey of his process in the creating of a few pages from Godhead, published in 2018 with Fantagraphics.

Frederick Luis Aldama:  Ho Che, can you talk about some of the decisions you made when creating your 2-page spread that appears on pages 48-49 of your 2018 published, Godhead (Fantagraphics)?

Ho Che Anderson:  These pages of the story appear in Chapter 1 titled “Corporate World”.  We’ve got our main character and one of our more substantial supporting characters, encountering what will prove to be battle robots in the second volume of Godhead. I wanted maximum visual impact.

To this end, the page layout’s hugely influenced by Frank Miller’s work; when I was a teenager I encountered Frank Miller’s The Dark Night Returns. I would turn the page and be confronted with a full-page, dramatic image, say, Batman jumping off a roof.  I’m very cognizant of what takes place on the right side of a spread or on the left side of the spread and being aware of the impact that you can have when you flip that page, you get that image.

In this case, you flip the page and you get a pretty dramatic full-page shot of these 5 battle robots — with the sixth one peeking out.  I wanted the reader to be confronted with this dramatic image of cold, harsh technology coming at them.

I also wanted to give the reader some idea of what was going to be coming their way in volume two of Godhead.  Even though these robots are only seen in this sequence, I wanted the reader to know that, oh my God, something big is on the horizon.

FLA:  Can you speak to your choice of linework and perspective that leads readers to focus on certain objects?

HCA:  I have an image that appears in my brain then I put it down on the page. And while I’m not conscious of the process at the time of drawing, I know there’s a lot of formal thought that goes into the linework to lead the reader’s eye to different parts of the page. For instance, the people coming in from the bottom left on a diagonal line lead the eye upwards, and then this leads the eye down across the top of page 49.

FLA:  Page 49 seems to use a formal panel layout to slow down the story so readers can soak up the dramatic build up.

HCA:  I want to slow the story down a bit so that our main character can take in what’s happening and we can feel the impact. So the reader gets a sense of the effect these robots are having on his psyche. This is also why I move from a wide shot at the top of page 49 to a medium close up so I could capture more the subjectivity of the main character, the CEO.

FLA:  You chose not to use color and instead to shape the story with grays, whites, blacks.

HCA:  Originally the idea was to do the whole book in full color—like those full-color pages included at the back of Godhead. I’m very inspired by movie concept art.  That’s a big thing with me.  The late great Ralph McQuarrie, one of the designers of Star Wars, is an idol of mine. I’ve got a massive tome of Ralph McQuarrie’s artwork that he did for Star Wars and for a number of other projects. I wanted to do a science fiction book in that style.  The problem was to do an indie comic book of that ambition required a budget that this comic book did not have.

This is a passion project.  At a certain point I realized it was probably going to take me 20 years in my spare time painting the entire comic book.  I had to make the decision: to go black and white.  I can crank pages out really quickly when working in black and white.

When I decided to change from the color pages to black and white, I wasn’t going to redraw those pages.  So I turned them into gray scales.  The way to match that look throughout was to do the black and white art and add gray tones to them. 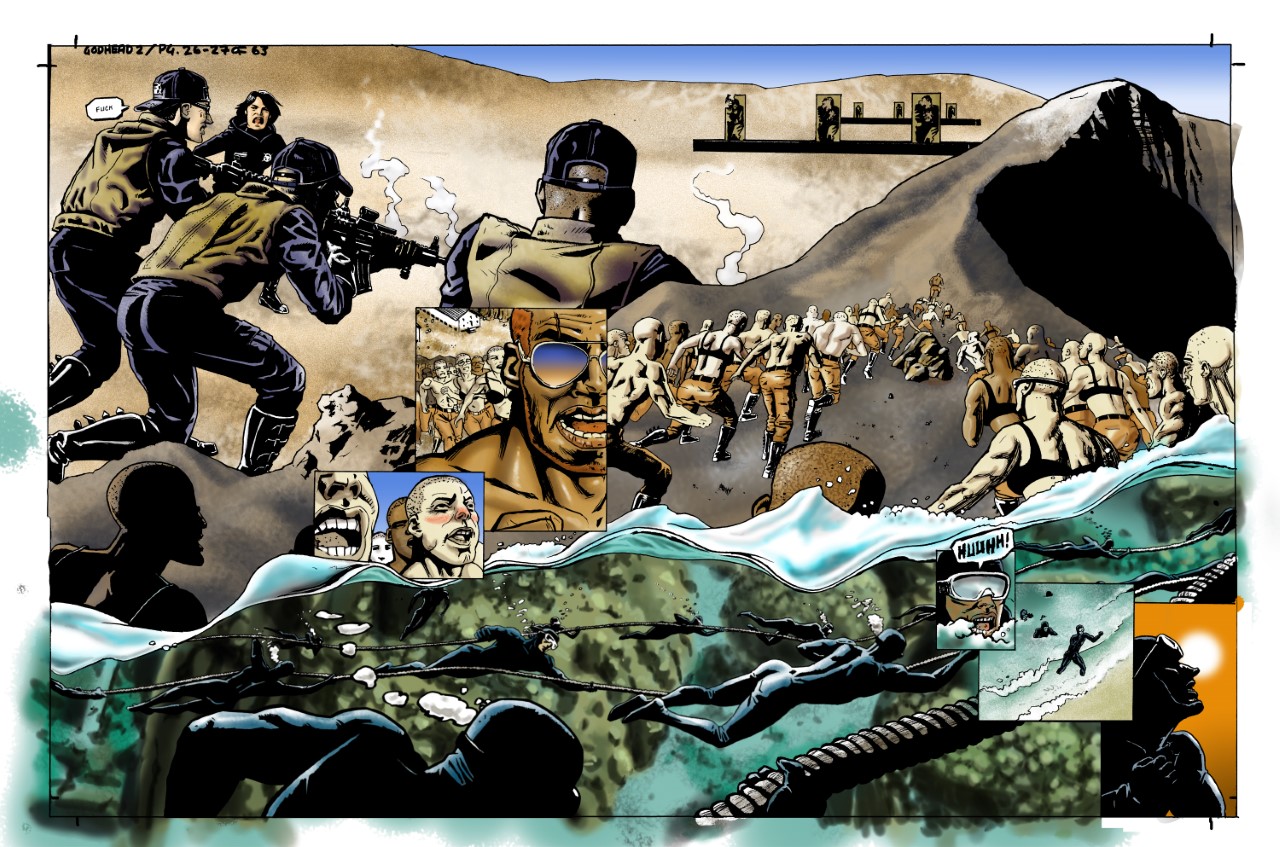 FLA: You chose not to use gutters around the edge of your pages?

HCA: This is very Chaykin and Steranko inspired. I really wanted to kind of mimic my idols. I wanted to have the panels bleed off the page. It was a technique I experimented with in my early teens when I was first trying my hand at creating my own comics, but I was afraid of it because it didn’t look like the Marvel and DC comics I’d grown up with.

Then I discovered The Shadow and Steranko’s Outland and there was something about the way the images continued to the edges that felt like the world of the book continued beyond the page, even though I wasn’t privileged to see it. It was like the difference between a typical feature shown in standard projection and a 70mm epic; when I was a child and you’d see “presented in 70mm” you knew you were in for something serious. Not using edge gutters always felt like that to me, though I’m also looking forward to going back to something more traditional the next time I draw comics.

FLA:  What kinds of tools did you use to create Godhead?

HCA:  I go all over the place with my inking tools. I use whatever feels right in the moment and whatever, honestly, is handy.

In the 80s and early 90s I used a lot of rapidographs, the technical pens, for my straight, ruled lines, occasionally even to ink my figures. But the problem with those pens is that they clog a helluva lot. They produce beautiful solid lines that stand up to erasing, but their maintenance is a pain in the ass.  So I started switching to drawing pens, like Microns. I’ve used every brand but these days I tend to use something called La Pen. You go through them really fast, and the lines aren’t quite as beautiful on the page, but they’re indistinguishable when they’re printed.

So, generally speaking, when I’m drawing a ruled line, I’ll use these pens.  For my curved lines, I use ellipse templates or a bendable ruler.  For my figure work, with the thicker lines I like to use a standard brush.  I’m brutal with them and go through them really fast, so I don’t spend a lot of money on my brushes. For the thinner lines, I use crowquill pens for the most part, the Hunt 107 for decades, and lately the Hunt 102.

Although I have to say even for my figure work I’ve been using those drawing pens I mentioned a lot more recently just for expediency sake.  You don’t have to keep dipping the pen in the ink all the time to refill the nib, and you can just go faster.  I can take the board with me.  I can sit on the couch, and I can watch TV, and I can draw there. It’s just a lot easier to use these types of drawing pens.

I used to use Sharpies—a lot.  If I’m in a clutch, or I’m just in a mood to use a Sharpie, that’s what I’ll use to fill in black. But I use them less now because I’ve noticed you get this sort of yellowy thing kind of bleeding through the page, and when you store them in a stack like I do that yellow stain starts to appear on the page underneath.

So now I’ve gone back to using a brush and india ink to spot my blacks, which I have to say is a very satisfying activity, filling in a large area of black with a brush. It’s almost like a coloring book.

As for the ink itself, I like to use Dr. PH. Martin’s Black Star matte. It’s a very thick, rich ink that feels a lot closer to the printed page. You can still see brush strokes when you see the originals, but it’s still a really rich, thick black, which I love. 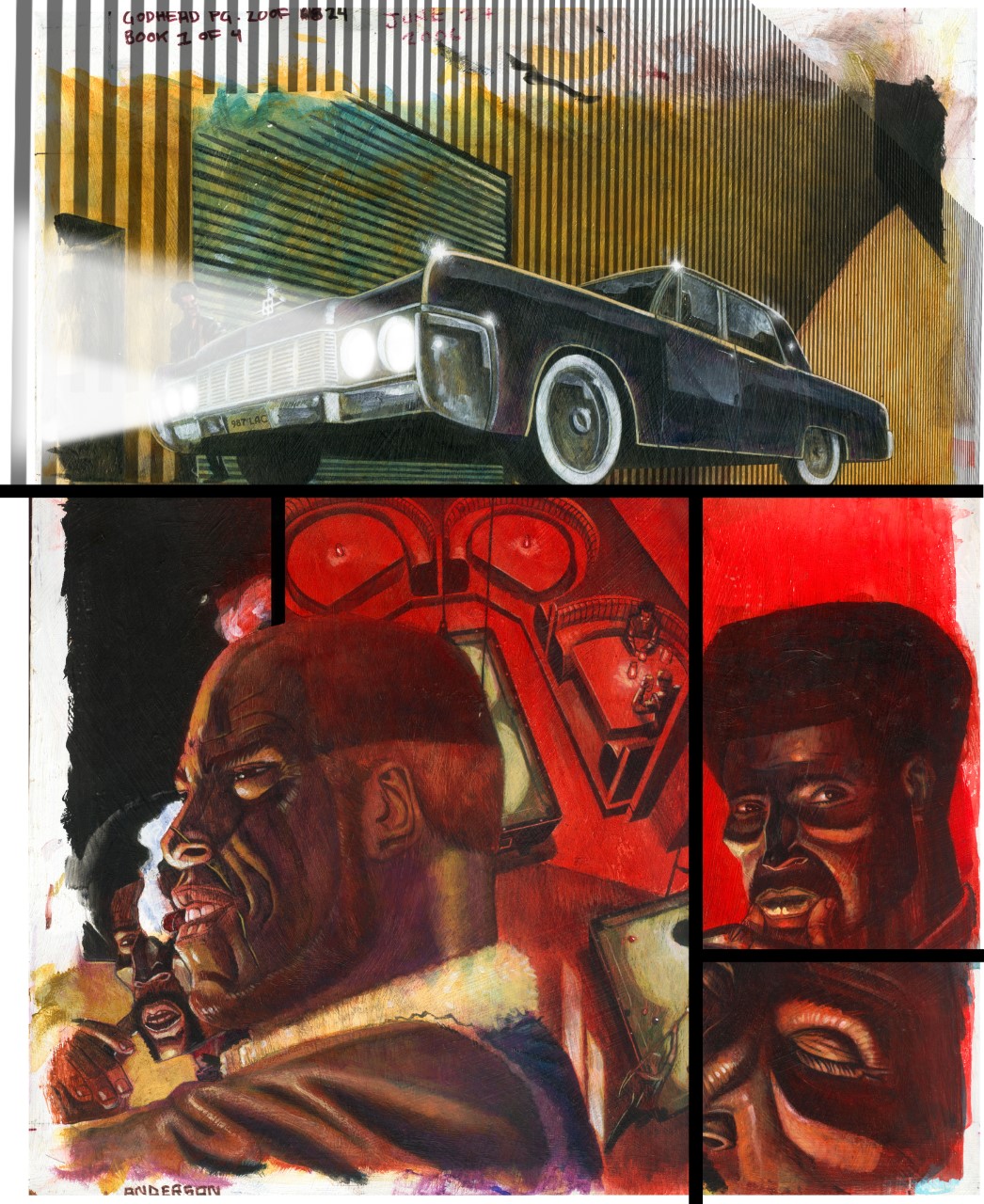 HCA:  I use Photoshop for the gray scales. I very much like the unison of digital and analog.  I don’t want to give up the analog ways because I like the tactile nature of drawing on a piece of paper and having a tangible object at the end of the process that I can sell or give away or just admire as something that I created.  Even though I do a lot of strictly digital art, when I’m doing my comics, I especially like to draw on a board and then scan it in where I can use those Photoshop brushes for the gray that you see on these pages and throughout Godhead.

FLA:  Page 48 of Godhead has a lot of detail. How many hours on average do you spend creating a page like this?

HCA:  When I get into a rhythm and I go at a good clip, I can usually turn a page out in a day.  Sometimes if it’s a little more complex, it might take a day and a half to two days.  With page 49 I did a lot of sketches of the robots beforehand.

And, while I didn’t design the robots on the page, there was some redesigning that was necessary when I turned the sketches into a finished drawing. These robots are super complex. Unlike drawing a person where I have plenty of references, I had to imagine the robots from scratch. I didn’t build models. I had to imagine what they would look like from this perspective.  So creating this image actually took a lot longer than normally.

To get this entire spread took a long-ass time; probably four days, including a day to do the gray scales.