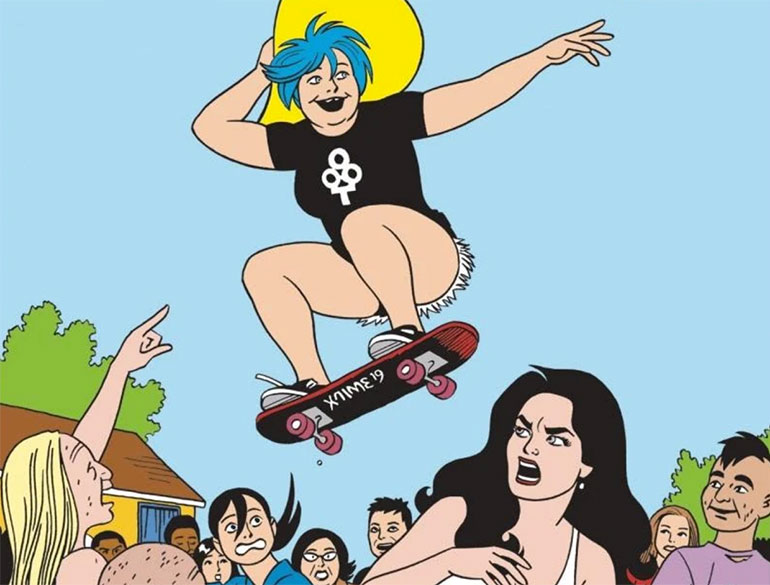 In the comics world and beyond, Jaime Hernandez needs no introduction. However, his place in the radical revolution of comics — mainstream and Indy — does merit some review.

In 1982, Fantagraphics published (64-pages in magazine size) Jaime and his bro Beto’s Love and Rockets. Together they showed the comics world a radically new aesthetic, dissolving lines between mainstream — Stan Lee, Jack Kirby, Steve Ditko, Hank Ketcham, and Dan DeCarlo — and underground: Spain Rodriguez, for instance. They created a new comics storytelling form and language. As Gary Groth sums up in, We Told You So: Comics as Art,

very rarely did underground comix deal in ordinary people and quiet human relationships. [ . . .] Even then with the science fiction trappings, it was about the relationships, which were so naturalistic. If you look back on it, there really was nothing like it that had been done in comics. Jaime knocked me flat”

In these early issues of Love & Rockets, Jaime intermixed all genres, including sci-fi rocket ships, dinosaurs, and the quotidian life of a Latinx barrio. As the series evolved, so too would Jaime stories. With “Locas” Jaime grew exponentially the complex lives of Maggie and Hopey over huge stretches of time and inked pages.

From Love and Rockets series and graphic novel stand-alones to his recent The Dragon Slayer: Folktales from Latin America (2017) and Tonta (2019), Jaime continues to create hugely expansive word-drawn storyworlds chock full of a dizzying array of multi-ethnic, multi-generational queer and straight characters, showing the world that Latinx lives matter. 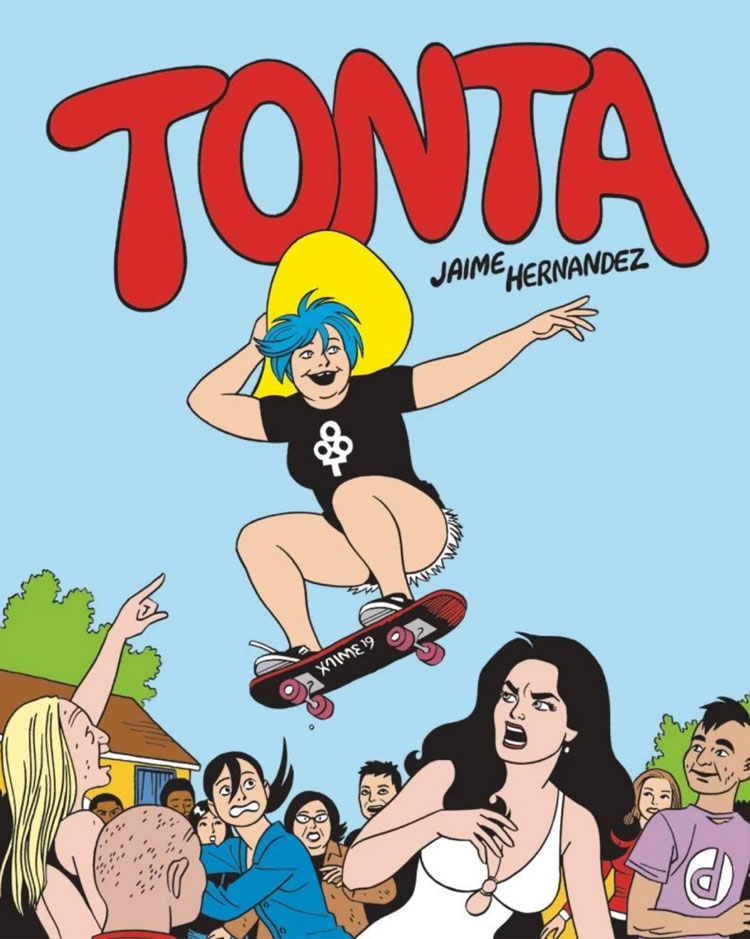 I recently met up with Jaime. I watched him draw for some fans, reminding me that he’s a lefty. He draws with the page tilted clockwise at something like a 30-degree angle to his body, allowing him to actually see what he’s drawing without his hand getting in the way.

I was also reminded of how this posture only makes the magic of his comic book storytelling even more wondrous. As usual, Jaime took his prodigious talent and international fame (Harveys, Eisners, and Eisner Hall of Famer) in humble, graceful easy strides. As usual, he brought to the discussion his understated yet inescapable huge joy of life and love of comics.

Frederick Luis Aldama: Jaime, can you walk me through the aesthetic decisions made with the first page of Tonta (2019)?

Jaime Hernandez: I’m introducing Tonta in this opening page, so I wanted to do a giant splash page: “Here she is!” With her name — TONTA — running across the top of the page together and her big face, I’m telling the readers that this is the main character and that they’re in for a fun treat. In the panels that follow, I begin introducing her world through the interactions of Tonta and the other characters.

I just love the big, bold image. It reminds me of an old Archie comic. When I was a kid, I would open up the comic, and there it is: Bam! That’s what I was going for. 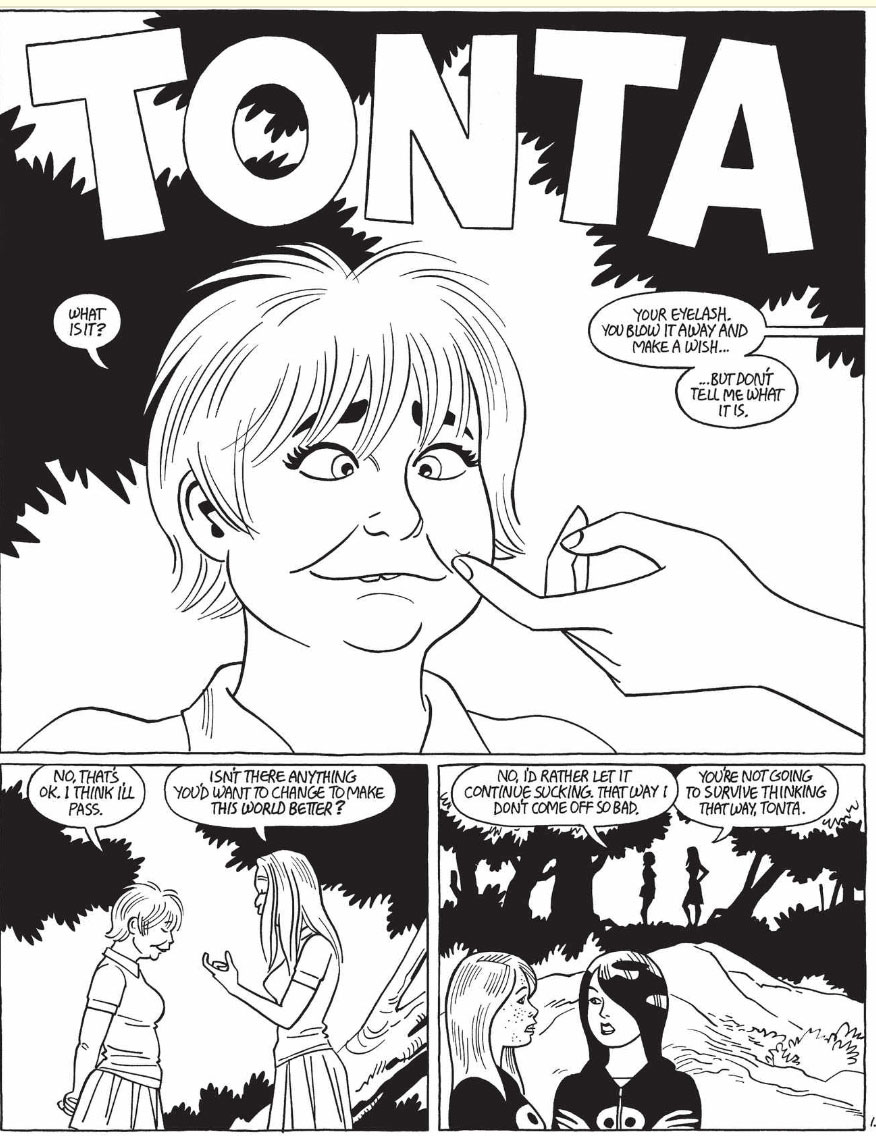 FLA: Can you share some of your process in deciding on the background images such as the silhouetted trees and rocks?

JH: This is the easy stuff. Trees and rocks don’t need perfect perspective. I can use the backdrop to draw to put spot blacks, drawing whatever I want. For instance, I thought the top of the page could use some black, so I added leaves. As you travel down to the bottom two panels, I wanted to balance out the page with some more black. The silhouetted shrubbery did all that work.

FLA: Ah, yes, and the black spots also keep readers focused on the interaction of the characters, telling us that this will be a character-driven story. You mentioned your decision to have the first, big bold image of Tonta for that Bam! Effect. What about the panel layout for the rest of the page?

JH: Sometimes I make decisions based on how much space I need and how much space I have. The dialogue is pretty in real time, so the panel layout allows for the breathing of the pacing for the dialogue to flow. It’s not just the words; it’s the layout and simple images that give it a very easy flow, emphasizing their simple conversation while standing casually in in the woods. 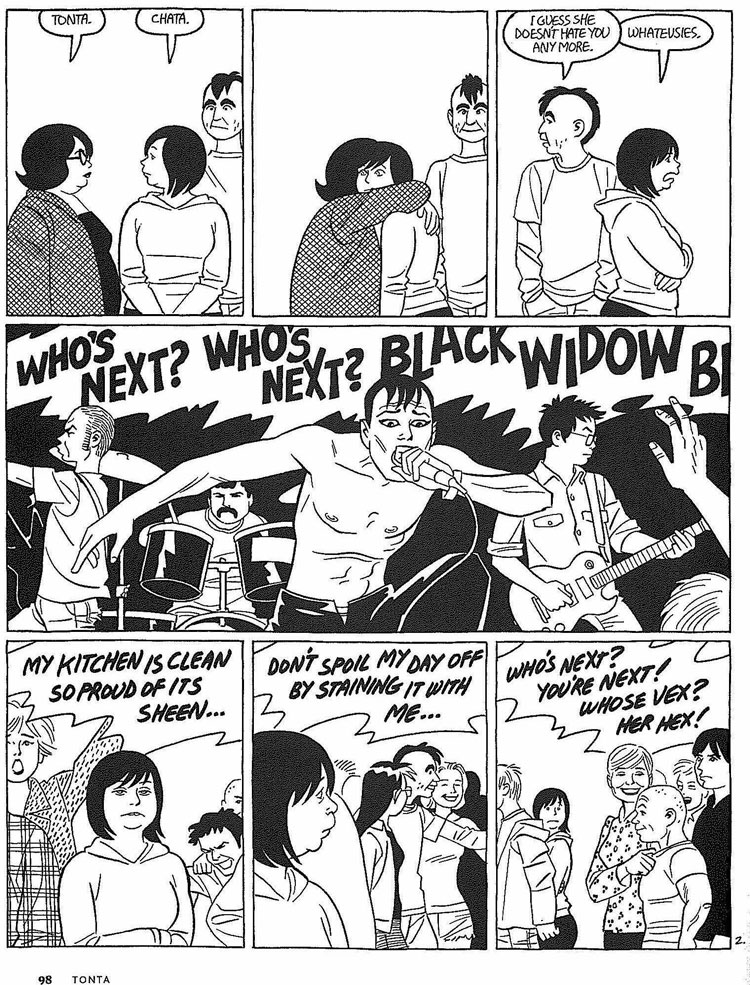 FLA: Can you speak to your process of cutting from panel to panel, guiding the reader’s experience of different units of time/space?

JH: Each page is different. Sometimes when I’m doing a conversation in real time, I need a lot of space in the comic. But there’s only so much space. So instead of giving it three tiers, I’ll give it four tiers. This gives the story plenty of room to breathe in real time, but doesn’t leave much room for images.

FLA: With the final pages that close Tonta, you choose to use a three-panel followed by a set of four-panels.

JH: It really all depends on how much space I have at the end when I’m finishing the story. Here, I didn’t have to cram it. All along in the creating of Tonta I paced it right so at the end I didn’t find myself trapped — forced to finish the story with four panels because I didn’t time it right. In this case, I timed it all right.

The ending is like the first panel on the opening page of Tonta. It’s a very easy, calm scene. It’s just them hanging out by the water — a flashback of the characters as they were growing up. The story is about a dysfunctional family, but this shows that even if they weren’t the nicest people, they were still trying to be a family. 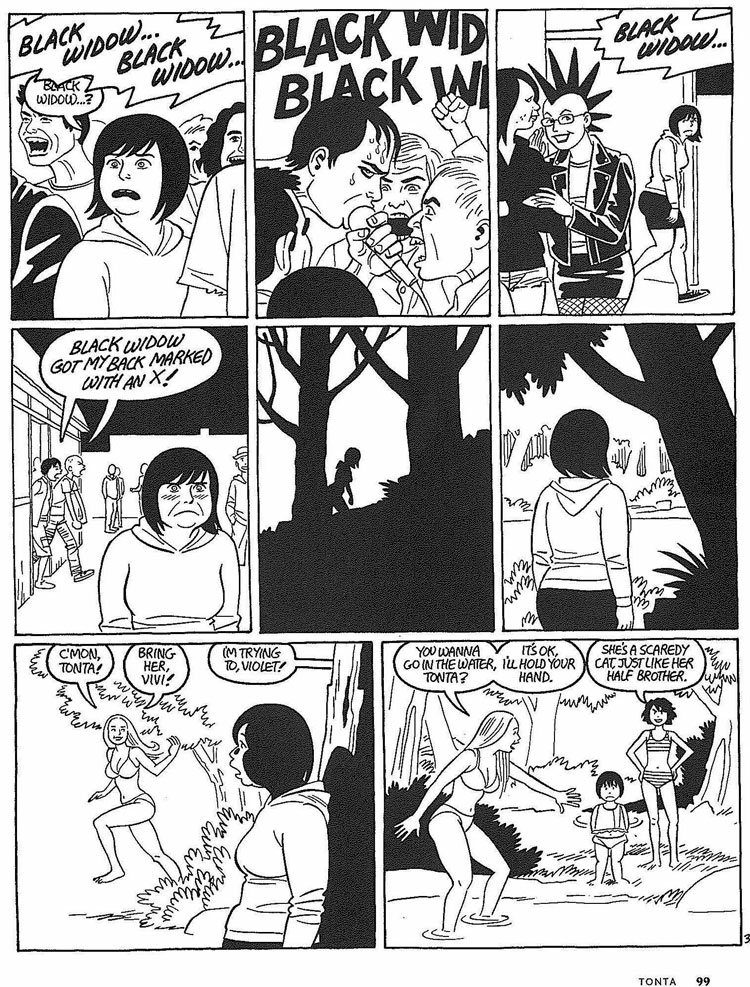 FLA: Tell me about the writing. How do you work and rework the script here and elsewhere in Tonta?

JH: I’ve been doing this for a long time, so I can trust myself with drawing the images, layout, the pacing, the writing, all aspects in shaping the story. I really work by an old method that I don’t even believe anymore, but I do it automatically. I try to vary the size of the images within each of the depths of fields of each panel. And, I try to bring balance to the page as a whole. As I draw each panel, I’m constantly thinking about how all the panels will add up to give a sense of balance to the finished page. That’s what’s most important. 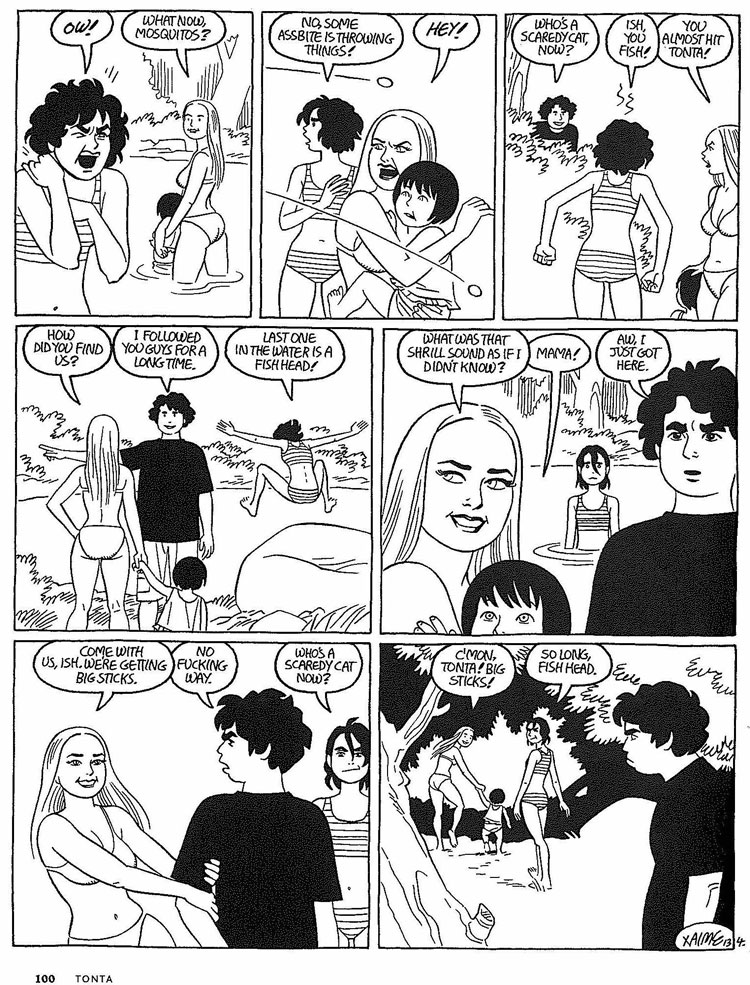