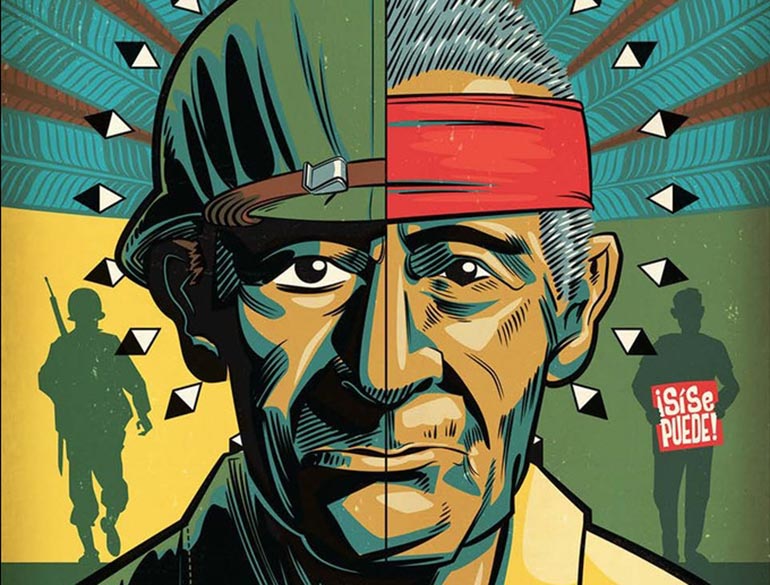 In case you hadn’t noticed, there’s an off-the-hook force of nature in the comics ecosphere: writer Henry Barajas and illustrator J. Gonzo.

With Henry, think: razor-sharp instinct of a Joan Didion blended with the street-level acuity of a Carlos Monsiváis and the reportage panache of a Jorgé Ramos. With Gonzo, think: dynamism of Kirby, ligne claire of Alex Raymond, and the off-color palette and texture of a Van Gogh. Both of these immense incisive and creative forces come together to gift comics world the collected trade press edition, La Voz De M.A.Y.O. Tata Rambo (2019). 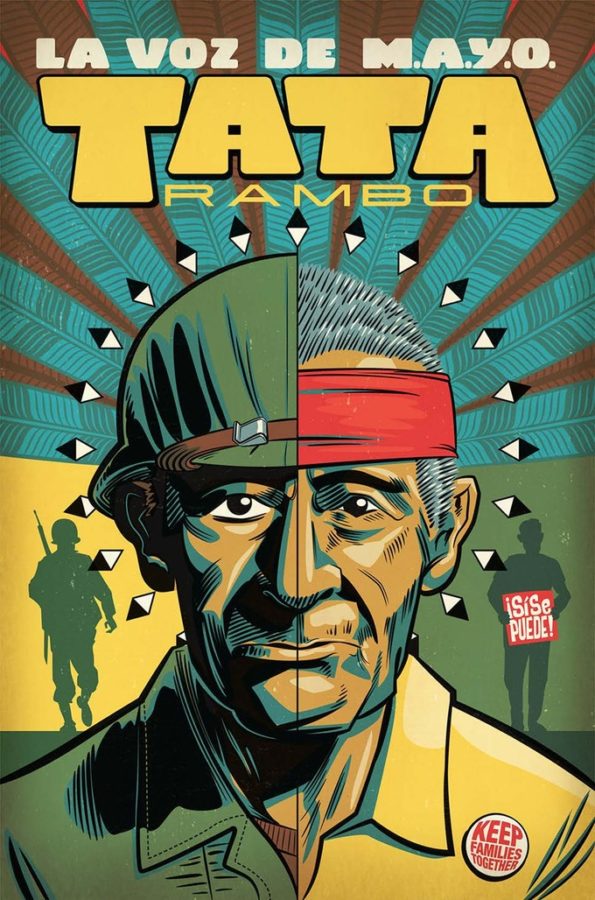 Of course, neither appear ex nihlo.

Barajas cut his teeth as an award nominated journalist, writing for the Tucson Weekly, Arizona Daily Star, The Beat, and Tucson Sleeper, among others.  For just as long, he’s been writing, lettering, and editing comics, including Unite and Take Over, Break The Walls, Where We Live, and The Good Fight. He’s parlayed much of this experience into his formidable presence at  Top Cow Productions as Director of Operations.

Gonzo began to hone his visual storytelling craft already in high school, attending the highly selective, Orange County School of the Arts’ Visual Art Program. After training as a graphic designer and working as a professional tattoo artist, he continued to sharpen his skills working for ad agencies, design studios, and as senior art director for Todd McFarlane Productions. Gonzo stepped away from this life to dedicate more time to his single-creator comic series, La Mano del Destino—one of our century’s most vital comics creations. 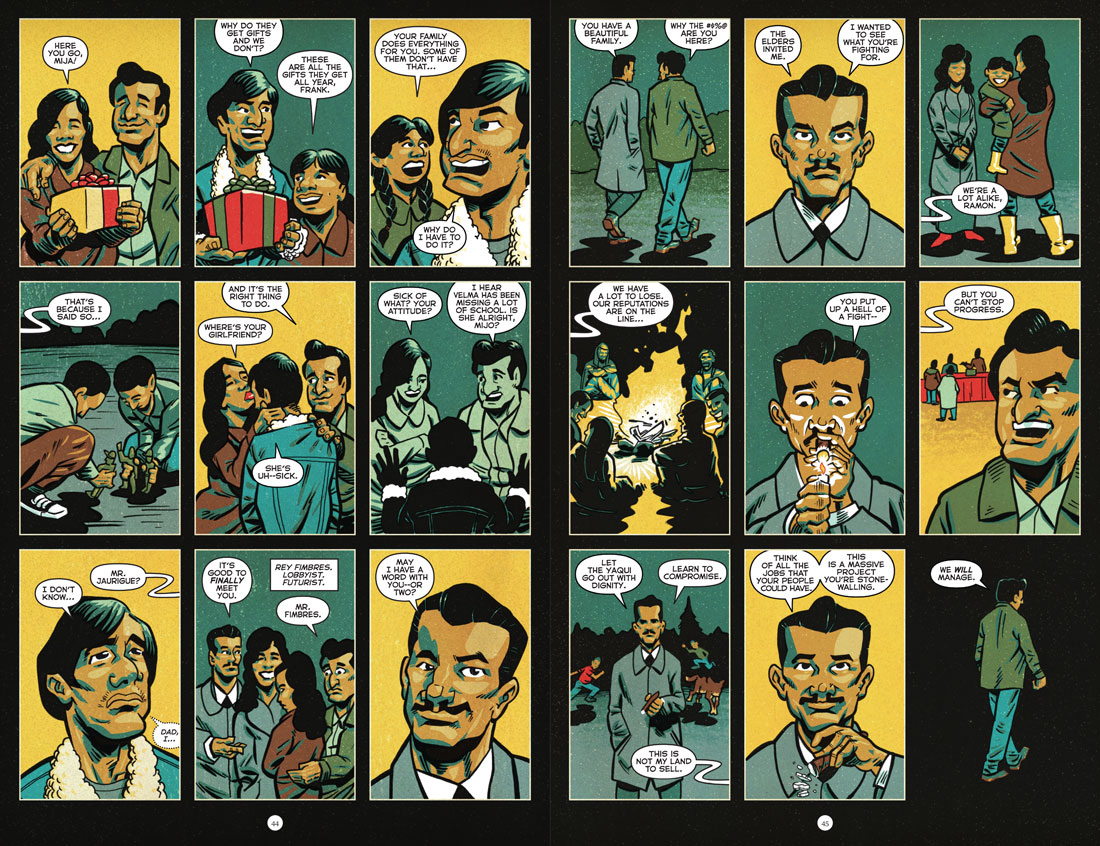 In a Comicosity interview with Barajas and Gonzo, we discussed the importance of La Voz De M.A.Y.O. Tata Rambo. How this nonfiction graphic reclamation works to give voice to otherwise untold histories. How their comics journalism steadfastly stands alongside Lila Quintero Weaver’s Darkroom, John Lewis’s March, Ho Che Anderson’s King, the many nonfiction vignettes that make up collections like my Tales from la Vida as well as Where We Live and Love is Love. They all work powerfully to reclaim, restore, and affirm our stories—our histories.

Here Barajas and Gonzo share insights into the creative decisions made in the visual and verbal shaping of an 18-panel, two-page spread from La Voz De M.A.Y.O. Tata Rambo.

Frederick Luis Aldama: Henry, from the writer’s point of view, and Gonzo, from the artist point of view, what was the process for giving shape to this 9-panel spread (44-45) from La Voz De M.A.Y.O: Tata Rambo?

Henry Barajas: This is the crossing of the Rubicon moment for the protagonist. For the first time, Ramon’s with his family.  He is also trying to help the tribe organize against being displaced. He’s failing to manage both, however. His family doesn’t feel appreciated. And the tribe feels like he’s trying to keep them there against their will.  It was important for me to find a way to have him deal with the pull of these opposing tensions. Gonzo and I had a long conversation about using a nine panel grid as a way to convey this. 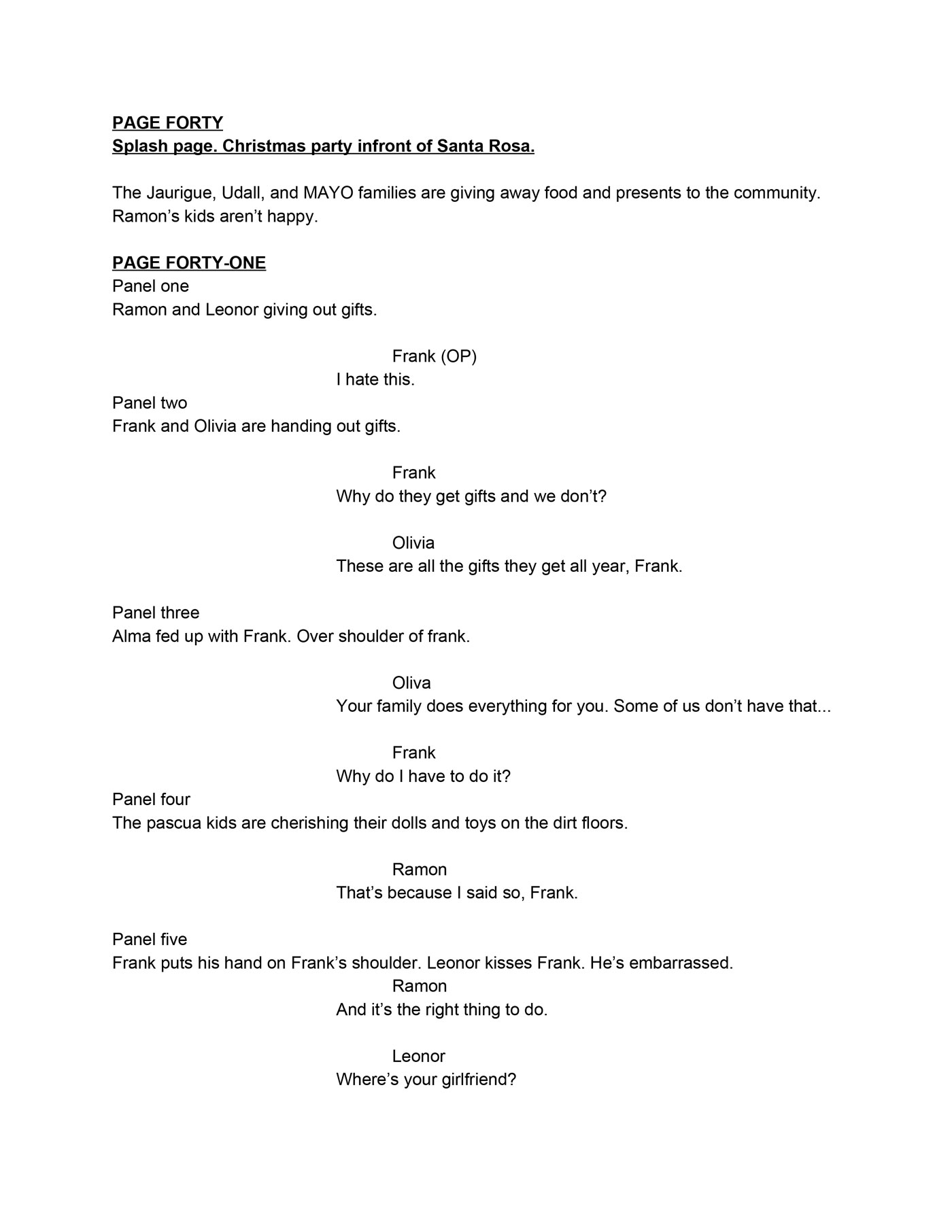 FLA: 9-panel layouts are extremely rare in comics. And then you go for a 2-page spread with 9-panels.

Gonzo: Henry wanted this laid out as a 2-page nine panel grid, so that’s what I did. With an 18-panels 2-page spread, essentially, you really have to get the rhythm right. I thumbnailed the two pages to work out the meter, punctuating the regular beat, beat, beat of the medium shots of the characters (waist up) with a series of uniform close-ups (a full head and a little bit of chest).

On the second page of the spread, I chose to include a first panel with a full figure shot of Ramon walking with Rey Fimbres, the antagonist, and the final panel with Ramon walking away.  In the first panel, they’re mirrors of each of other: walking at the same pace and at the same angle.  But once Rey makes his point and leaves, I wanted to remove Ramon from the environment.

That’s why I created that final panel with him walking away into a sea of blackness: no background, no panel border, just Ramon in total blackness.  This marks the moment when Ramon makes the decisions that end up isolating him from family and community. I wanted the first and last panels to mirror one another, but in a way that also shows this decisive break that leads to his isolation. 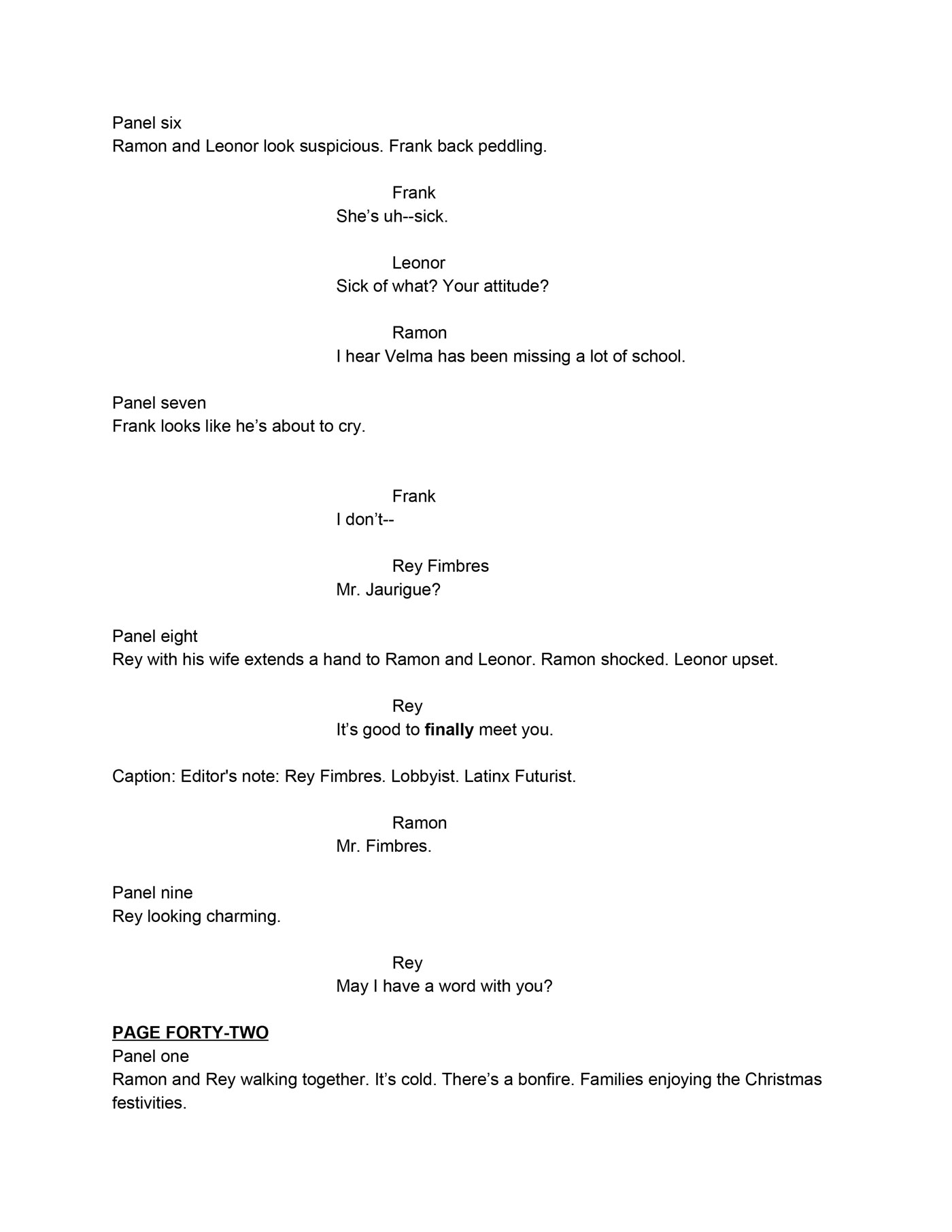 HB: I wrote Fimbres as always smoking a cigar, to reflect how he, like the cigar smoke and smell, constantly invade other people’s space.

FLA: Was there a moment when you didn’t see eye to eye in the creating of this spread?

HB: For the most part, we just got it.  We didn’t need much back and forth on what we were trying to accomplish.

JG: I know that Henry had a slightly different idea for the set up for Fimbres: a medium shot followed by a close-up. When I laid it out and saw that the Fimbres panels lined-up straight down the middle, I decided to treat it like an animatic, changing his expressions as your eyes move through the center of the spread. 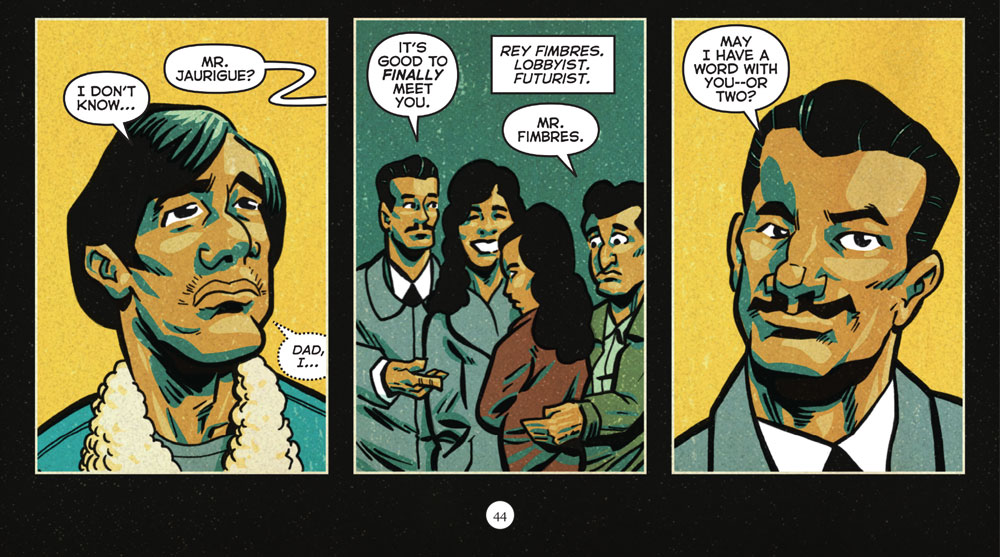 FLA: The aesthetics (layout and perspective) and meaning line up nicely: Fimbres as representative of corporate greed bisects and divides the page—and the people. Is there also a system of meaning created in the alternating of yellow and green background colors?

JG: There’s definitely a checker boarding of background colors. The yellow backgrounds are linked to poignant moments. The cooler green color is connected to the more invasive moments.  The color schemes also create a rhythm, emphasizing and deemphasizing, moving forward and moving backward. They lend a really nice rhythm to the entire spread, giving it to formally explore the story’s beats and rhythms through color—and not just the content of scenes being portrayed in each panel.

FLA:  Henry, from script to finished spread, did a lot change?

HG: Of course, after the images were sketched, I tweaked the dialogue a little. I wanted the pictures to talk more than the characters.  Otherwise, not much changed. The finished comic pages powerfully convey the tension Ramon experiences with his family. As I mentioned already, the family isn’t happy. Ramon’s son is jealous of the community because they’re getting more attention.  It shows Ramon’s isolation. And, it conveys how Ramon and Ray are on opposite missions. 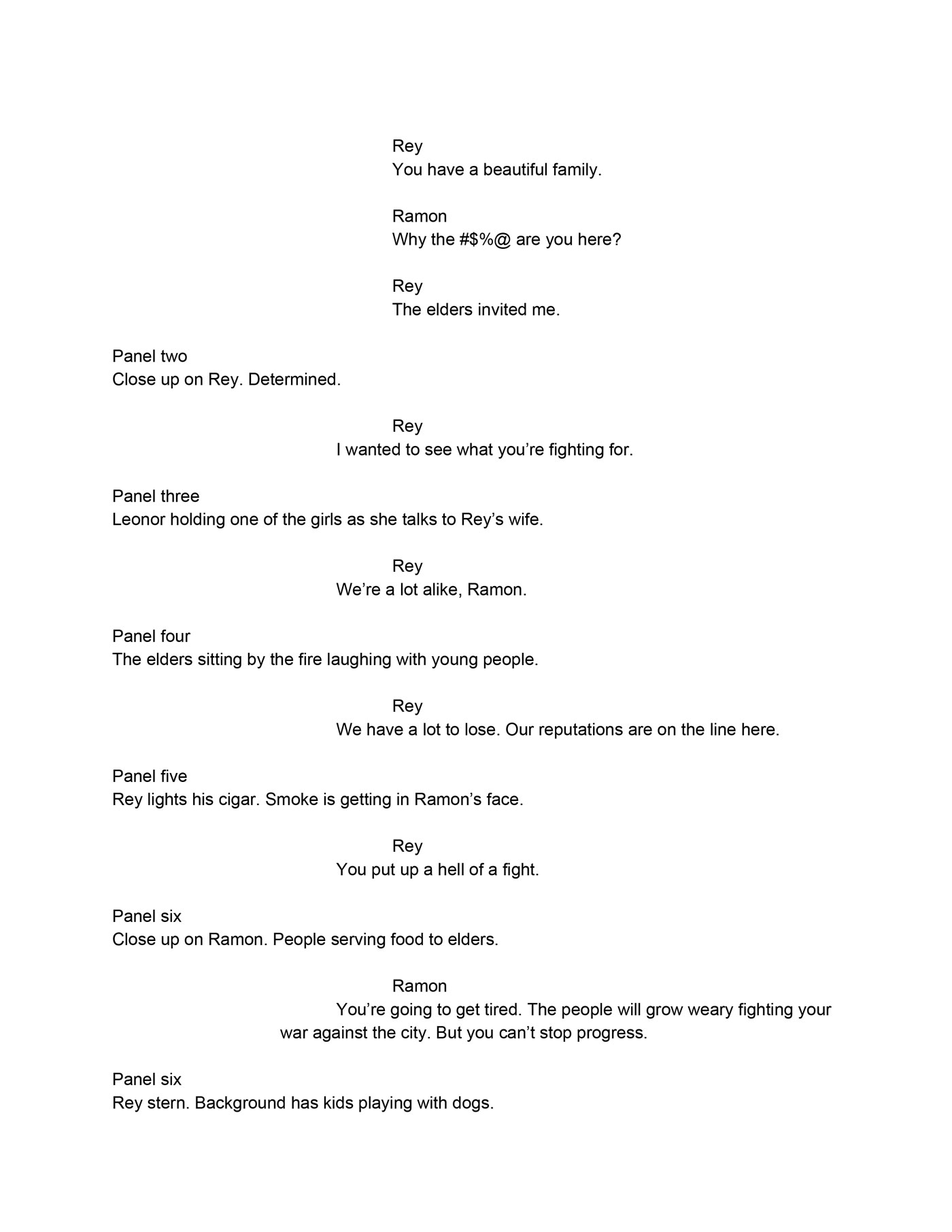 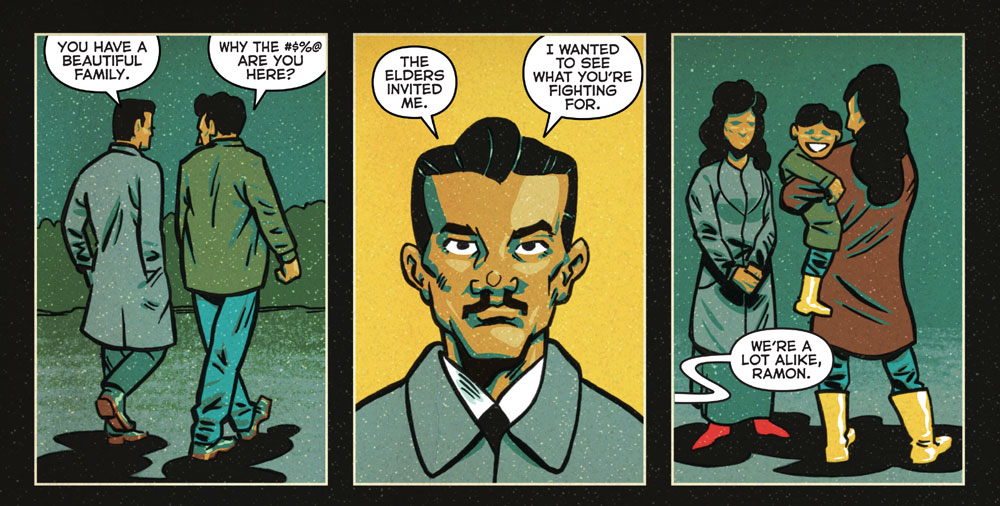 FLA: As you both already mention, you get each other.  Gonzo gets the vision of your script. He knows how to turn the words and visual cues that you give him into the images, emotions, and thoughts that you had in mind when writing the script.

HB: Exactly! In the writing of the script along with some visual cues I wanted to convey to Gonzo the idea of there also being a sense of the enjoyment in family and community life. Gonzo’s visuals brought this to life.

On the first page of this spread we see Frank and his sibling arguing but also the kids enjoying their gifts. On the second page of the spread, the panel with the fire conveys the beauty and joy of community that one experiences on those cold nights at Native American events when gathered around a fire; it’s such a natural way to be.

JG: At this stage of working together, I didn’t need to much direction from Henry. I knew what he was trying to convey. I knew that we wanted to convey some tension in this first page of the spread. The cutaway isn’t just to have kids in the background playing, but to have it stand in opposition to all the panels around it. I knew to create a contrast between the older siblings arguing and the younger kids playing. I knew that Henry wanted to show that family life is complicated.

I chose to use an overhead view of the kids playing on the ground to convey the sense that the reader’s eavesdropping in, looking down on this kind of happiness that is happening in the background of all this family with its personal and political turmoil. The reader’s in the midst of experiencing this family turmoil all while there are these quiet, happy moments. This is the complex life that Ramon lived. 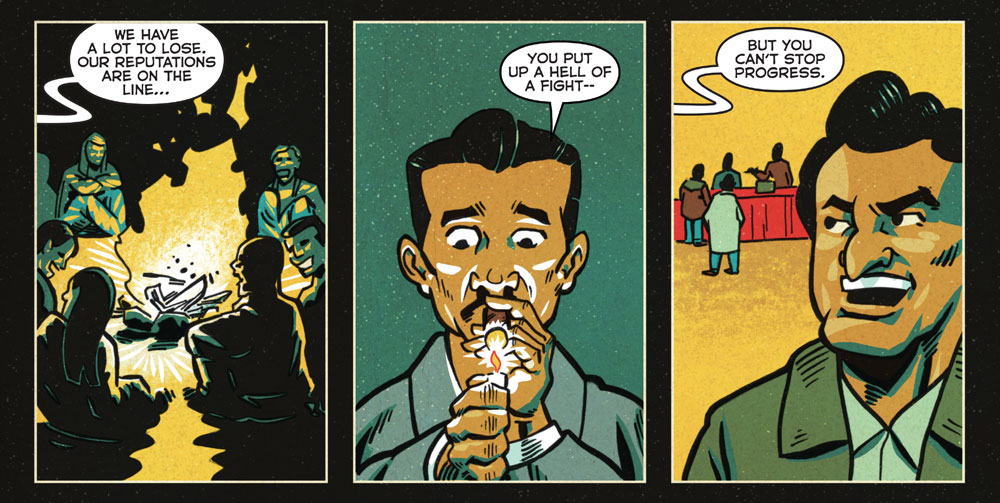 FLA: Of course, given the histories of genocide of indigenous peoples and expropriation of their lands, this has a deep, historical resonance.

HB: Yeah, we wanted to show that these are kids who are growing up on land that’s about to be taken away from them. We’re looking at generations of anguish and pain that has been caused for so long. It resonates also with what we’re seeing today, with all the deportations and separation of families.

FLA: Any pleasant surprises while co-creating this graphic biographical reclamation?

HB: What I love about collaboration are those surprises. For instance, I knew Fimbres was going to light up the cigar like he does in the first issue, but I didn’t anticipate this kinetic, animation of his face that Gonzo created, changing from stone-faced (first row) to the expressive (lighting up in the second row) to the smug you-lose expression (third row).

When we worked together on issue one, we were trying to figure out how to work with each other. In this issue, we knew when to step up for the other to explore other ways to tell the story. It was a lot of: “You do you.”  At this point, I could just mention what the overall feeling should be and Gonzo knew what to do. There was no need for a full-on panel description.

A lot of comic book storytelling is conveying a feeling through the visuals—and less about the words that are being said.  With this spread, I wanted each of the panels to come across with a series of different up-and-down emotions:  happy/sad, angry/ content, together/alone. That’s the rhythm that Gonzo was talking about. This was the dynamic of Ramon’s life. It was a rollercoaster ride: a hero to one people but falling short to other people. He was a man of dichotomy. 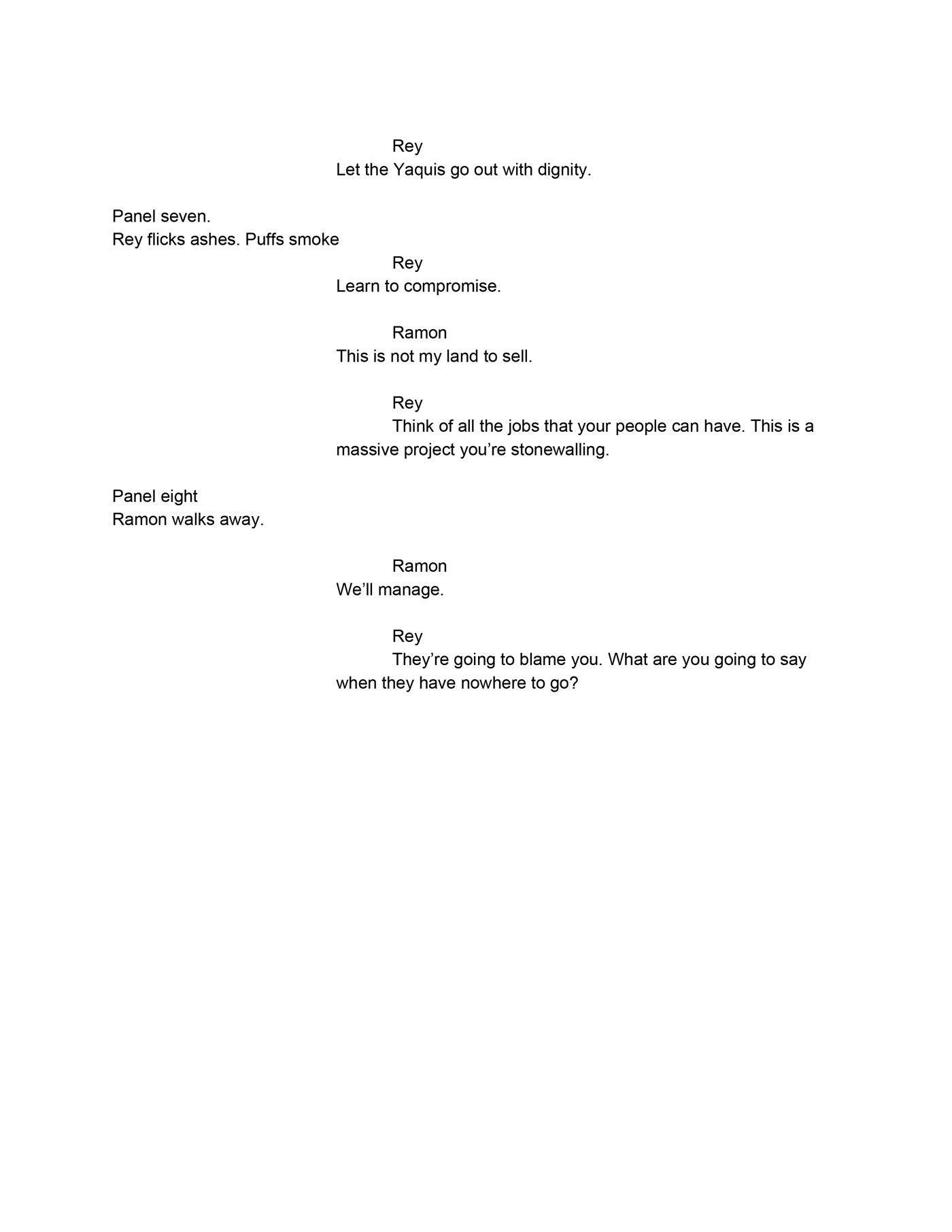 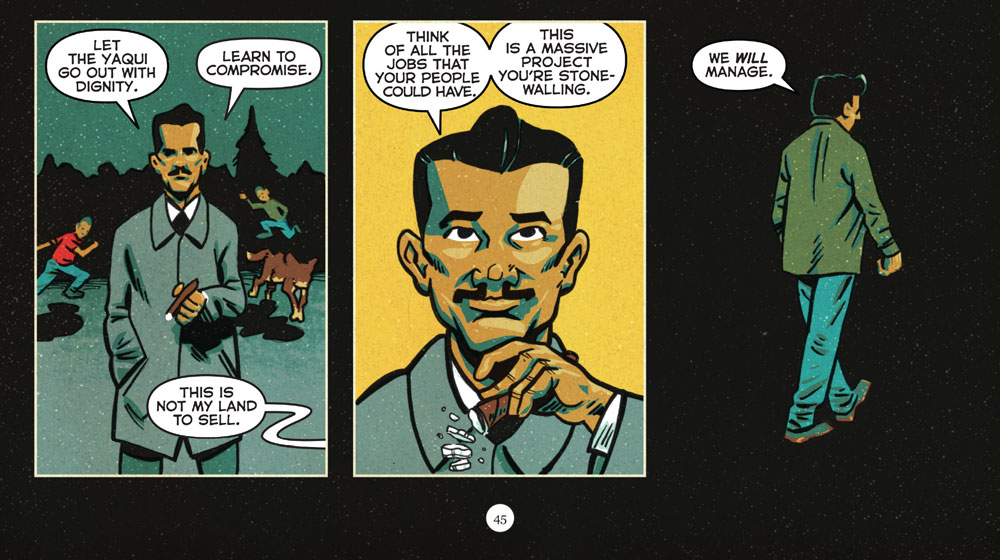 FLA: Gonzo, before winding this down, let me ask about your actual, material process with a spread like this. Do you follow the same process that you use with La Mano del Destino?

JG: La Mano is actually a much weirder process. So much so, that I won’t go into here. With La Voz,  I thumbnail on printer paper. Do the breakdowns on tracing paper. Light-box the breakdowns to pencils on Bristol. Ink on Bristol with pens. Then scan, color, and textures in Photoshop.

HB: With Gonzo, think of the most complicated way to do a comic. He has to control every step.

JG: True. The “colors and textures in photoshop” step is underselling the Gordian Knot of a process that I employ.

FLA: There were a lot of opposing forces in Ramon’s life that you both manage to convey in content and form in this two-page spread and the La Voz de M.A.Y.O: Tata Rambo.

HB: I think that this particular two-page spread exemplifies the kind of yin and yang of Ramon.

JG: Learning to work well together and the well-executed script allowed me to visualized Ramon’s complex story. This entire two-page spread embodies this process and this result.