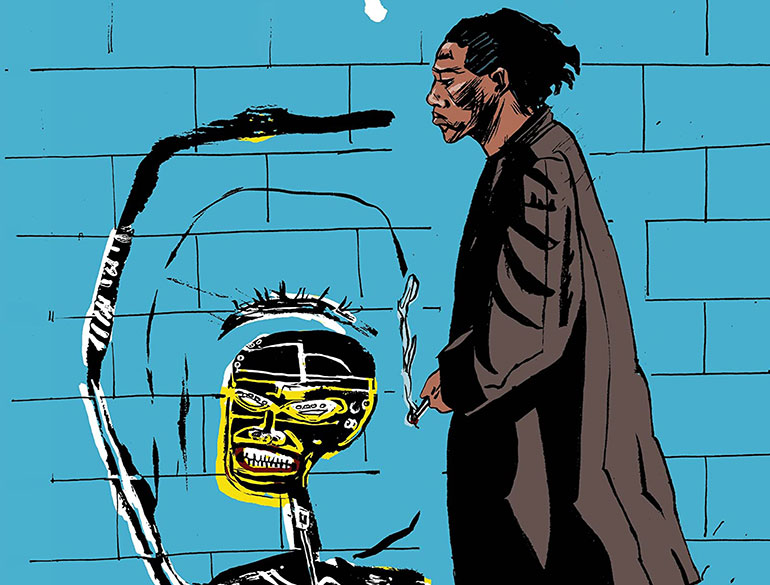 Comics artist, graphic novelist, and illustrator Søren Mosdal has been innovating at the heart of Danish comics since the turn of the 21st century. With Denmark’s comics scene historically gravitating toward comics for kids or satirical editorials, Søren’s work in Danish newspapers and magazines like Zoe, Euroman, and KBH in the late 1990s and early 2000s carved new experimentally expressive paths. Today, Søren is joined by many innovative comics creators.

He continued to innovate after turning to long-format biographical comics. In 2011, he published Hank Williams: Lost Highway where he deployed a carefully paced, uniform visual gridwork to contain a metaphysically probing exploration of Hank’s consciousness just before the even before his death, January 1, 1953.

With the publication in 2014 of Erik Le Rouge, Søren brought this same existential approach to a most unlikely figure: Erik the Red, the violent, hulking colonizer of Greenland. With his dynamic linework and contrastive blocks of muted yellow, green, and red color he invites us to step into more than blood-soaked early modern era. He asks us to take a slow breath with the thoughts and actions of this otherwise iconic action figure of Icelandic lore.

With writer Julian Voloj, Søren published Basquiat in 2019. He again deploys a range of visual techniques and styles to at once slow and frenetically energize Jean-Michel Basquiat’s rise to quick fame then death in an 80s, busting-at-the-seams Manhattan art scene. 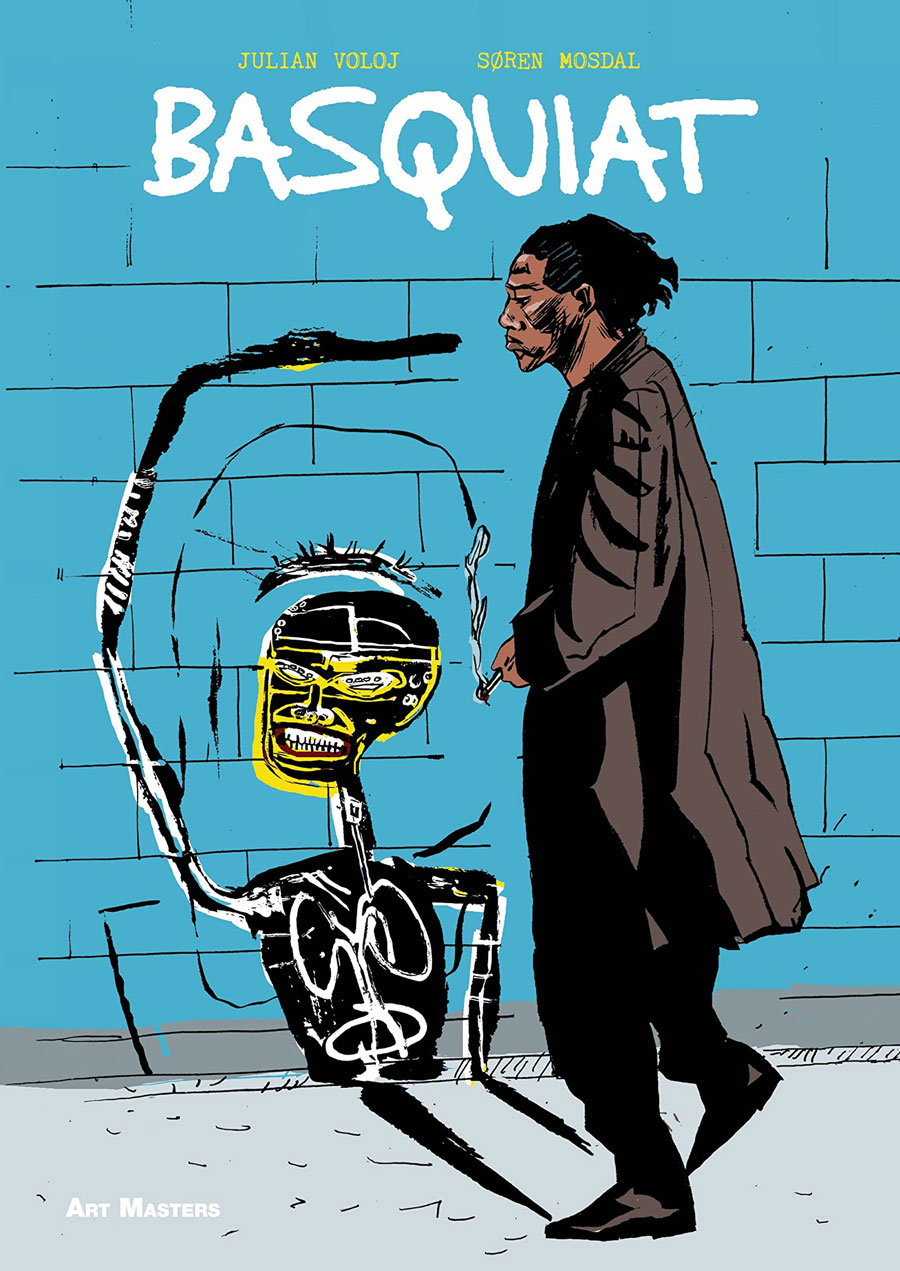 To join Søren Mosdal and his comic book journeys is to hypnotically step into the life of a biographical character like Hank Williams, Erik the Red, or Jean-Michel Basquiat. It’s also to allow yourself to be swallowed whole by the chaos of time and place: from the blood-soaked age of Vikings to an 80s New York City, for instance. It is to experience comics in their most precise storytelling form (think Bank & Olufsen’s acoustic precision and impeccable aesthetics) along with a blocky anarchic energy (think Gary Panter, Mike Mignola, Sanford Green) that finally invites us to step into new metaphysical exploratory spaces.

I was fortunate to be able to catch up with Søren recently to talk about his work generally and a few panels of Basquiat specifically.

Frederick Luis Aldama: Before we dig into an anatomy of a panel on your latest, Basquiat with Julian Voloj, let me begin by asking: Why dedicate a life to creating comics?

Søren Mosdal: I ask myself that on a daily basis.

It all started when I was five. We moved to Paris, France, where I spent a lot of time reading comics like Asterix, Lucky Luke, and Spirou magazine. It was the 70s — the height of the Golden Age of Franco-Belgian bandes dessinées. After school, it’s what I did. I read comics. That’s when I got the comics bug.

FLA: To formally sharpen your skills as an illustrator and visual storyteller, did you attend art school?

SM: I never attended a fancy art school — nor for that matter did I study drawing formally. I only took a few classes — with old ladies doing watercolors.

When I was 19-year-old, instead of going to college for art I moved to from the suburbs to Copenhagen where I found a studio with other people my age. They were also just starting out, creating comics and doing illustration work. We shared our work. We taught each other. I picked up all my tricks there. I stayed with the studio for about ten years. 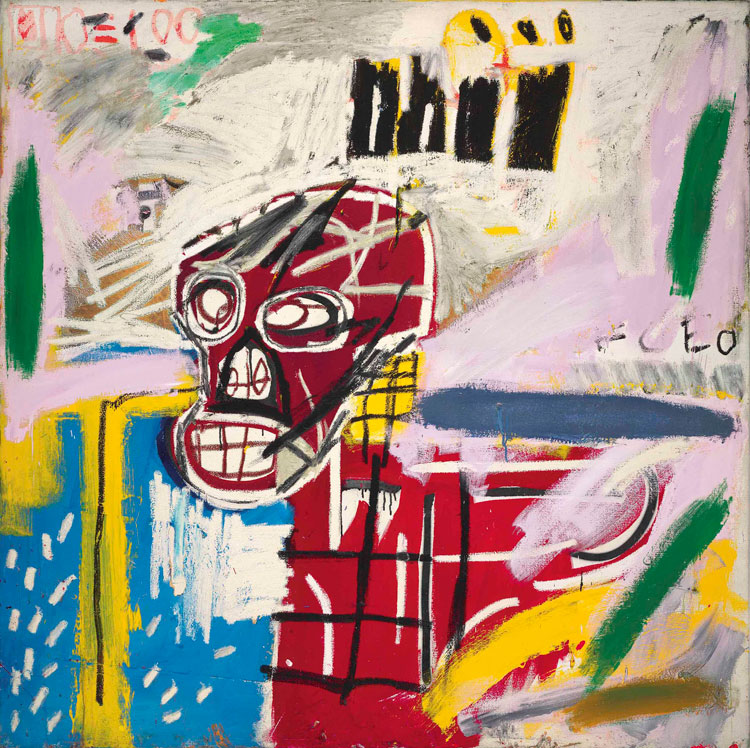 FLA: Was it straightforward path to publishing Gash in 1999?

SM: Back in the 1990s, if you lived in a place like Denmark you had few options. If you wanted to publish comics, you almost had to move to another country. I moved to the UK to work in a studio with some Brits. They put me in touch with Paul Gravett who put me in touch with the publisher that then published my first collection, Gash.

Today, it’s different. The Internet has made it so it’s less important to have to move physically.

FLA: In 2000 you published the super experimental, Feuerwerk with the French publisher, Amok?

SM: I teamed up with the poet, Jacob Ørsted. We decided to use a cut-up technique and random approach in the creating of those comics. We were both heavily inspired by the surrealism and David Lynch.

To be honest, I haven’t read Feuerwerk for 25 years. It might be good. It might also be really pretentious and silly. It was an experiment.

SM: I wanted to show people that I could create a real comic — and not just experimental comics. I wanted to do a proper long-form comic — like the ones I read growing up.

It was going to be my first real comic. I wanted it to be perfect, so I found myself creating the same five pages over and over again. After getting super stuck for almost ten years, I finally finished it. And, in 2011 it was published as Hank Williams: Lost Highway. It’s about the country singer. 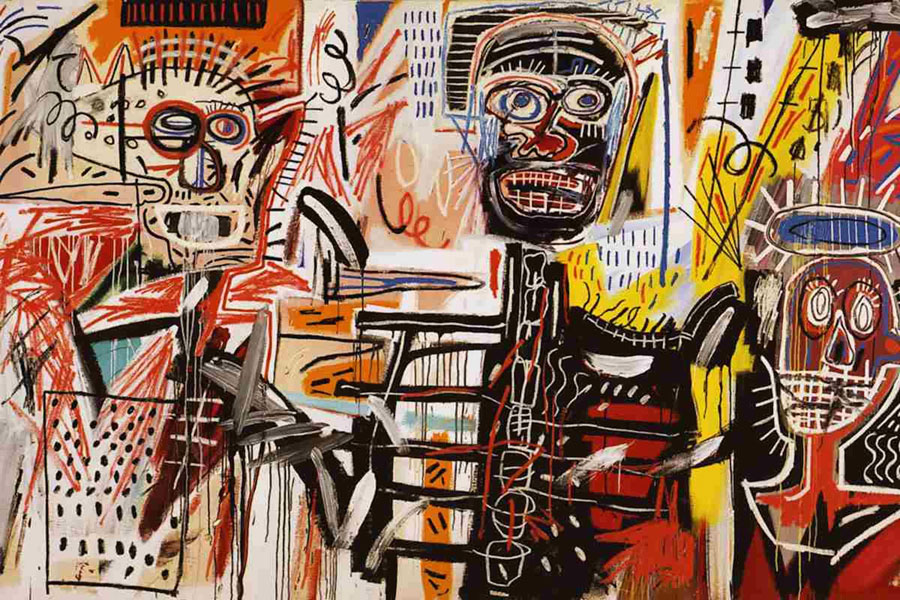 FLA: You created the webcomic, QUBIDOZE, available on Webtunes. Was this a different penciling, inking, coloring process?

SM: When I first began to create it, it was going to be published in print form. Then I found out about Webtunes and I decided to retool it into a web comic — a story that you scroll up and down. I had to reorganize the images and use black pages to scroll down through to give a sense of time; the sense of time in webcomics works very differently from paper comics.

Maybe I should go back to creating webcomics. They say it’s the future of comics.

­FLA: There are plenty of biographies and even another graphic biography of Jean-Michel Basquiat. Why choose this recent project, Basquiat?

SM: Ever since I was a teenager, I have been a big fan of Basquiat. He was my first proper idol back when I was still deciding if I should become a proper artist—and not a comic artist. You can see Basquiat’s influence, too, in my early comics. He was a big deal for me, so when the publisher approached me, I eagerly agreed. 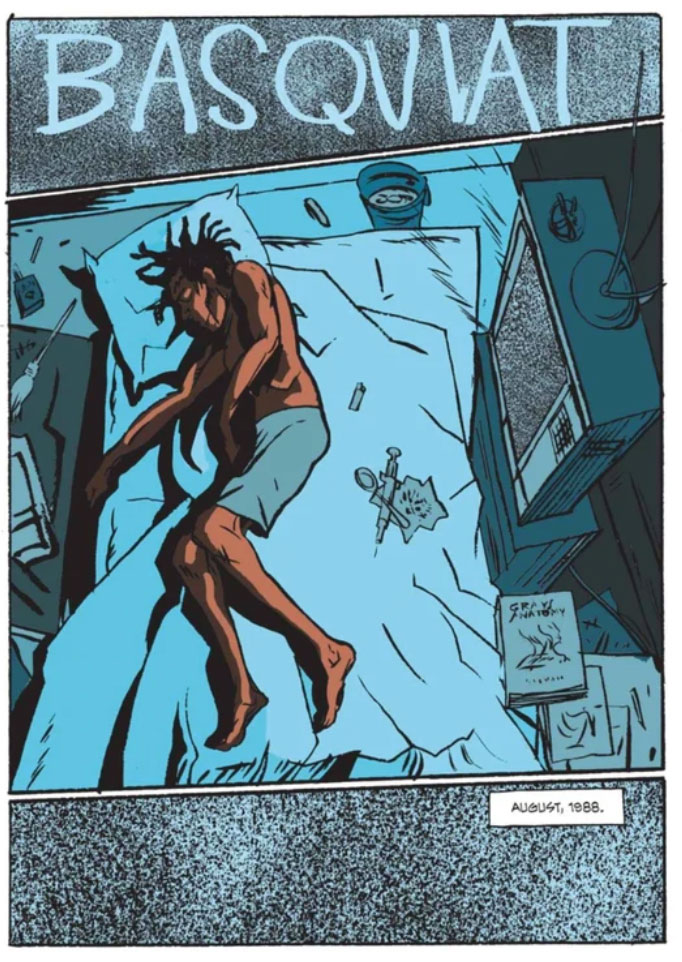 FLA: From Julian Voloj’s script you visually constructed the story. Did you have a vision or principle guide during your process?

SM: Basquiat was my guide. He was very disciplined as a painter. But, he was very fast. He didn’t get caught up in the little details. As a result, his art’s very energetic. I tried to duplicate this same sense of energy in my drawings for the book. I also pulled (Photoshop) all of his colors from his paintings. All in all, it took me about a year to draw and color Basquiat. 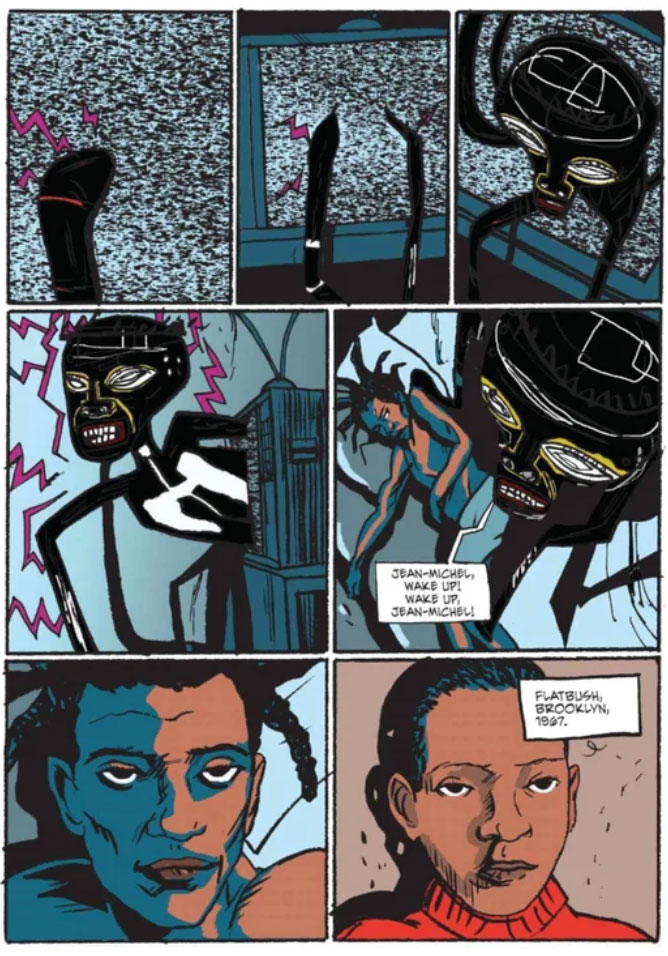 FLA: You open with a very Basquiat asleep and that blue-tinge, cathode-ray glow then follow with a Basquiat-like figure crawling out of the TV.

SM: It’s recognizable as a Basquiat figure. It’s scary — especially at the beginning. But he’s also friendly. Basquiat can talk to him. And, as the story unfolds he serves as his alter ego. I wanted to bring that feel and look of the underground art style I used in my comics in the ‘90s.

FLA:  What about the design and layout of the page?

SM: Generally, I didn’t do many preliminary sketches nor much of a layout for the comic. I would look at Voloj’s script, then start drawing. This is how I used to do comics — as a flow of consciousness. I didn’t think too much about it. I just let it flow. 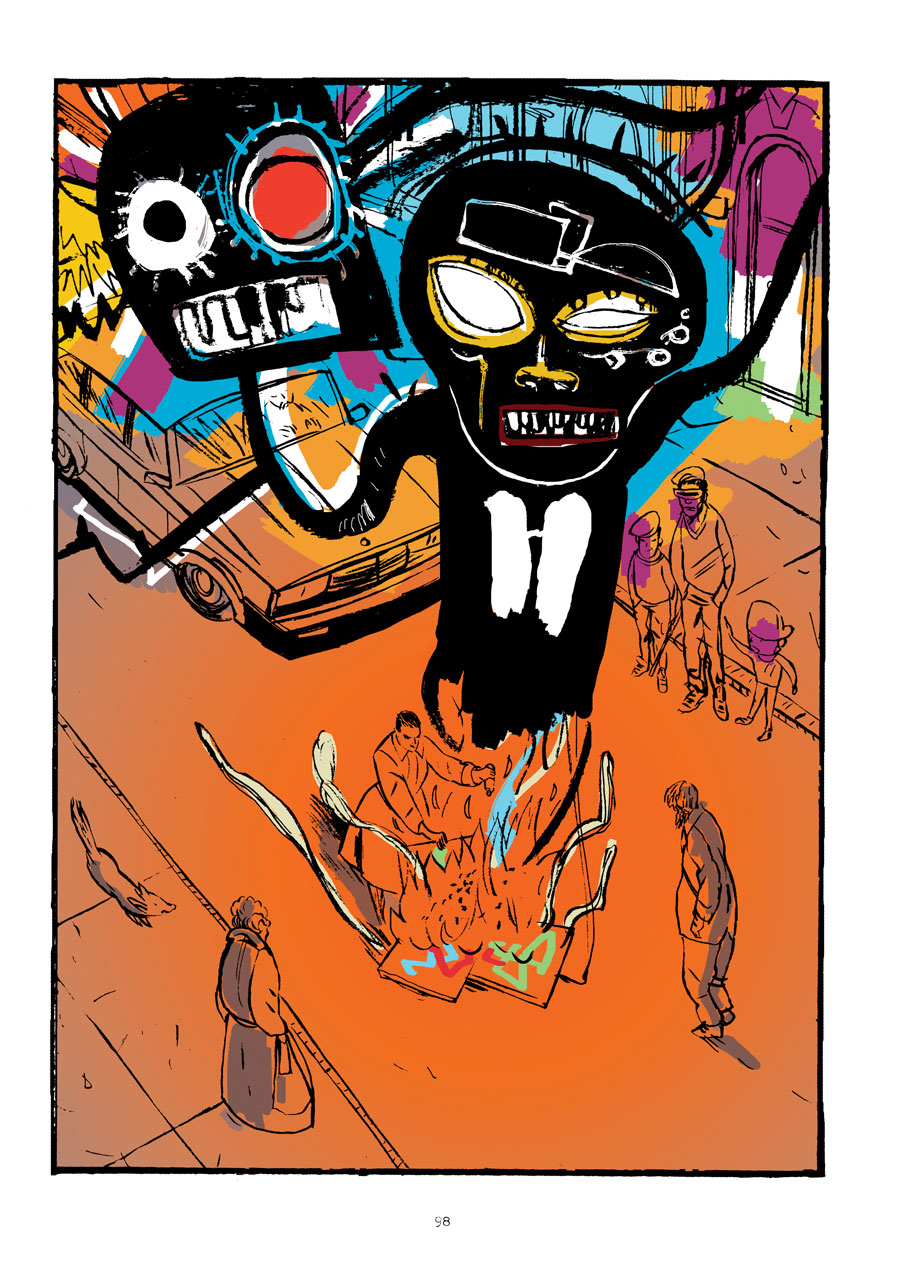 FLA: If I might turn us to this splash page (page 98). It’s actually more like a painting that you could mount on a wall. We’re already deep into the story. One of Basquiat’s love-interests, Suzanne Mallouk, finds him in bed with Madonna. It’s the turning point in his life.

SM: Suzanne’s pissed off. She’s burning Basquiat’s paintings in the street. I wanted the wiry, scary Basquiat-styled figure to appear here. And, of course, you’ll recognize all of Basquiat’s color palette here — all those powerful blues, greens, and yellows that are so characteristic of his art. 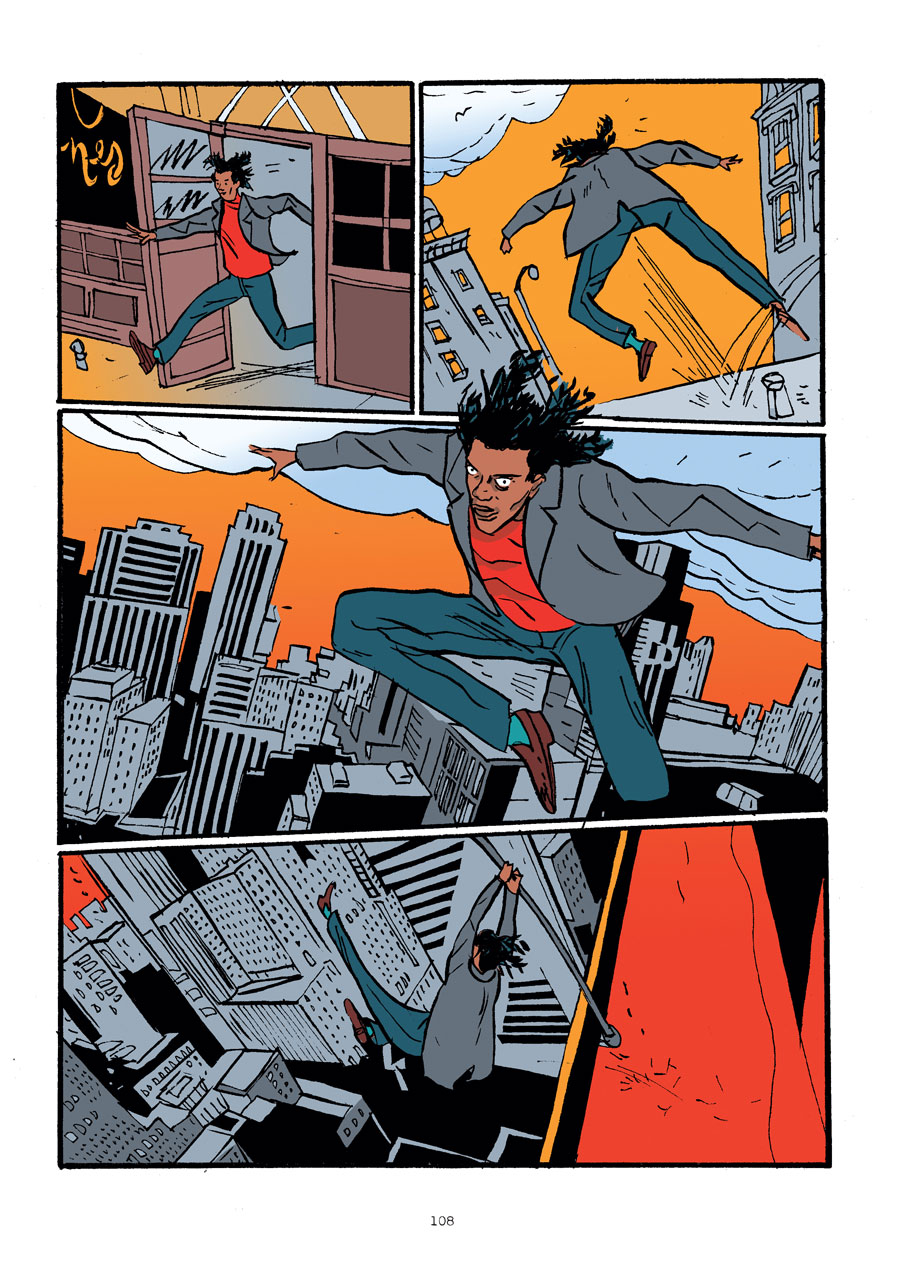 FLA: You infuse a superhero, Spider-Man aesthetic into that post-Warhol encounter (pages 108-109). It’s arguably the moment when Basquait feels most on top of the world.

SM: He just cut a deal with Warhol. It’s the moment that changes his life, launching him into fame. So, I draw him running out of this restaurant super excited, then leaping into the air like Spider-Man. I wanted to convey that feeling he must have had: these sense that New York City is all his, like Spider-Man. We see his focus. His joy. His sense of being superheroic. He can fly. Then, his life goes very quickly downhill from there. 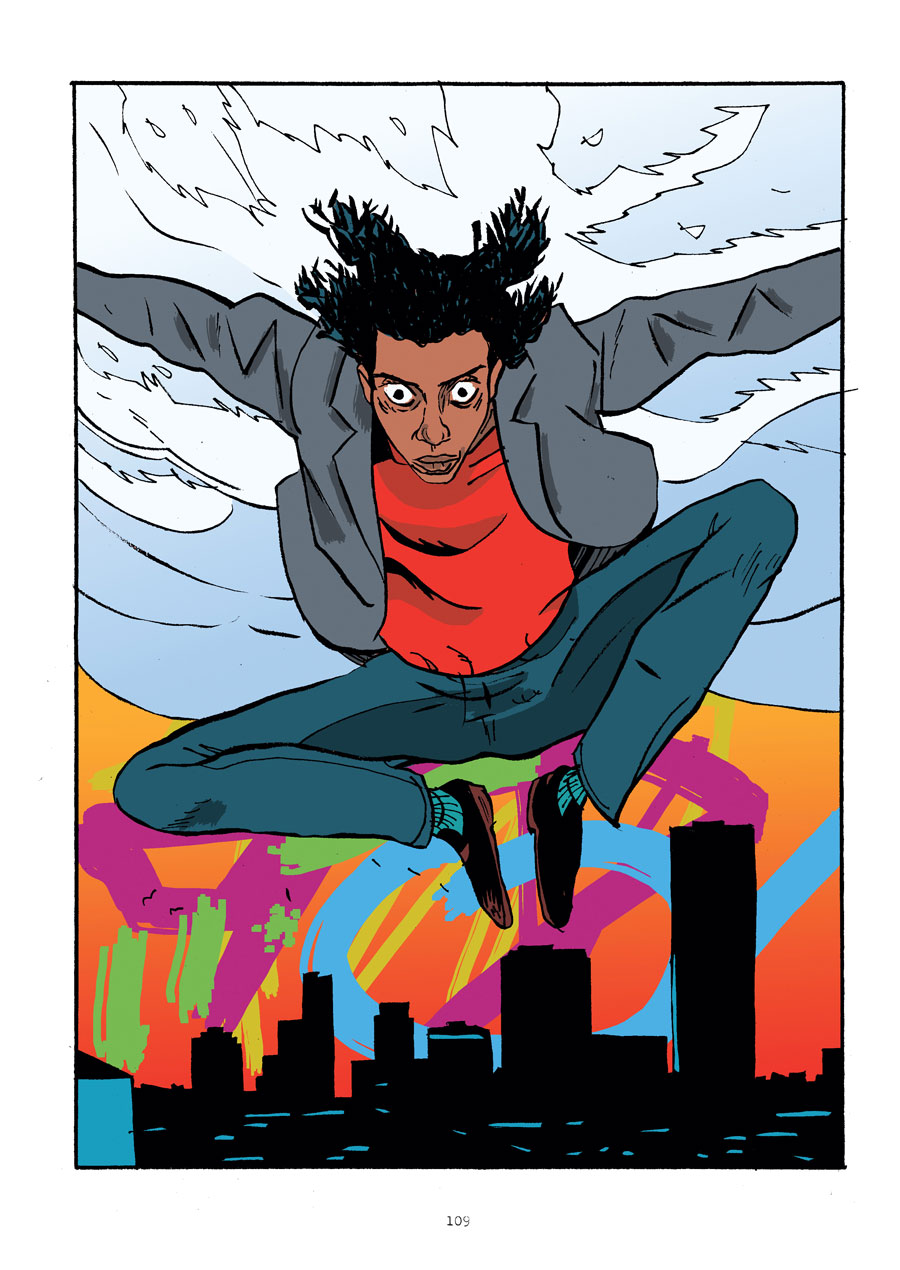 FLA: You use Basquiat’s color schemes as graffiti-like brush strokes across the skyline. Were you thinking: 80s graffiti aesthetic?

SM: I wanted the story to convey that cool ‘80s graffiti and hip hip-hop style. But I could have done a lot more graffiti, especially on the buildings.

SM: It was a pleasure.