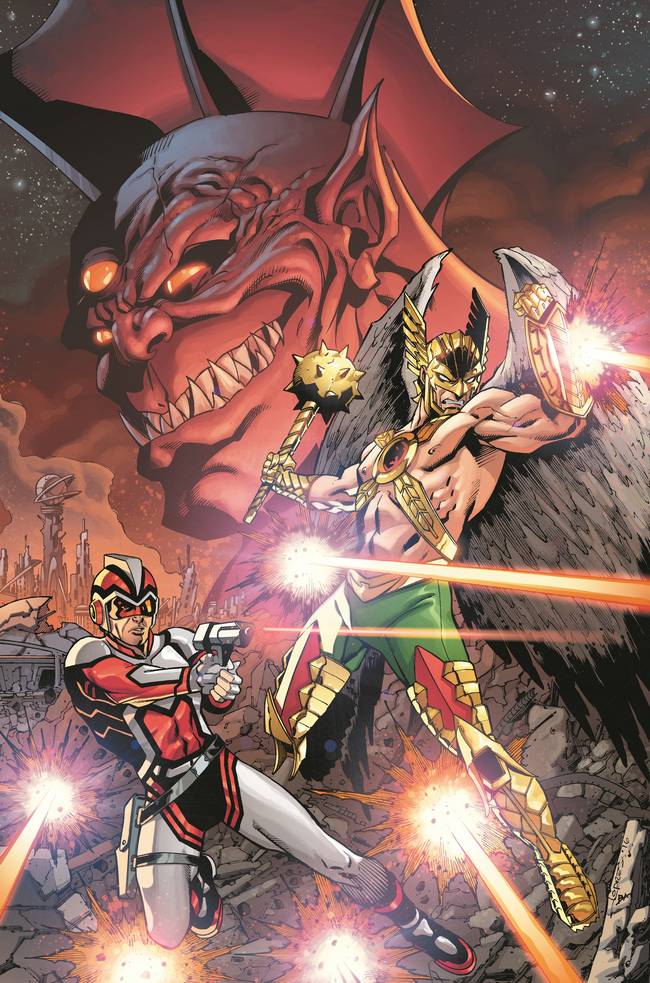 Writer Marc Andreyko (WONDER WOMAN ’77) and interior/cover artist Aaron Lopresti (THE NEW 52: FUTURE’S END, METAMORPHO/LEGENDS OF TOMORROW) are teaming up for a return to the worlds of Rann and Thanagar in HAWKMAN AND ADAM STRANGE: OUT OF TIME, a six-issue monthly miniseries scheduled to debut on October 5.

Residing on Earth and out of the hero game, Adam Strange finds himself trying to live a “normal” life, until he’s literally pulled back into adventure again as a seemingly normal Zeta beam transmission returns him to the planet Rann, where he hopes to be reunited with his beloved Alanna. But instead, he finds the once great city of Ranagar in ruins with millions dead, and the once peaceful Alanna is now calling for the blood of Rann’s oldest enemy, Thanagar, home of the Hawkmen.

Sensing something is amiss, Strange enlists the aid of Thanagarian policeman Katar Hol, aka Hawkman, who is also trying anything possible to avert war. Together the two try and uncover who’s really behind the destruction of Rann while at the same time preventing Rann and Thanagar from marching into interplanetary armageddon!

HAWKMAN AND ADAM STRANGE: OUT OF TIME #1 arrives at comic retailers on October 5.

Take a look at the exclusive announcement of this latest title by visiting Newsarama: http://www.newsarama.com/30112-hawkman-adam-strange-are-back-and-teaming-up.html