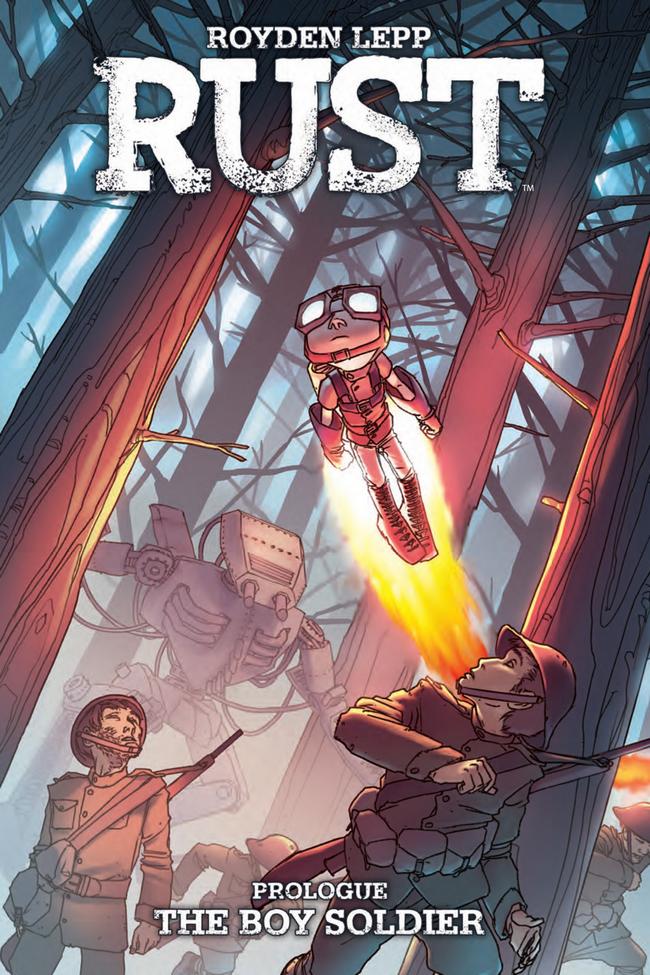 December 17, 2015 (Los Angeles, Calif.) – Award-winning publisher BOOM! Studios is excited to announce the March 2016 release of Royden Lepp’s Rust: The Boy Soldier, the vanguard of a new softcover program for the Archaia imprint.

Rust: The Boy Soldier collects the prelude stories from the first three original graphic novels (Rust: Visitor in the Field, Rust: Secrets of the Cell, and Rust: Death of the Rocket Boy) and presents them in new reading order with the never-before-seen prelude from the upcoming fourth installment, Rust: Soul in the Machine (2017). The inaugural volume will ship with an introductory price of $10.99.

Rust: The Boy Soldier chronicles Jet’s experiences during a massive world war. Made to look like a boy, but actually a robot built for battle, Jet is caught in the middle. While trying to save countless lives, Jet discovers there’s more to him than he could have imagined. His experiences in the war set him on a journey to learn what it means to be both hero and human.

“With the fourth volume of Rust on the horizon, we want this softcover program to get existing readers excited all over again, plus invite new readers into this fantastic world that Royden has created,” said BOOM! Studios Editor-in-Chief Matt Gagnon. “Rust: The Boy Soldier is a great gateway for those not familiar with the story of Jet Jones the robot boy, and I think the never-before-seen prelude from the fourth volume is the perfect reason for longtime fans to pick it up!”

Outside of the prelude stories, the Rust series follows Jet, post-war, after he is thrust into the lives of the Taylor family, having crashed into the side of their barn. Oldest son Roman Taylor struggles to keep his family’s small farm afloat as the area heals from the war. While the rest of his family may not trust the mysterious boy with the jetpack, Roman believes the secrets of Jet’s past may be the key to their survival . . . The first volume, Rust: Visitor in the Field, will be released in softcover in fall 2016.