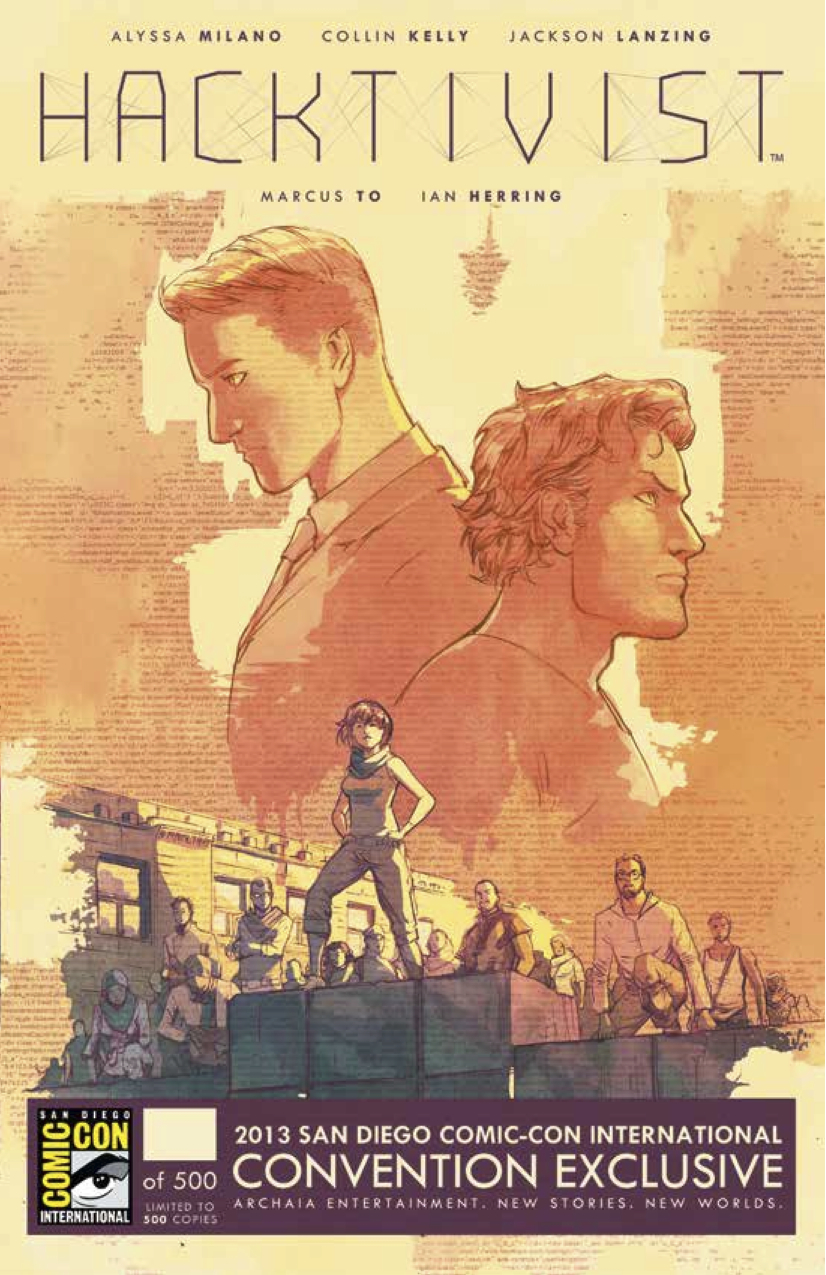 Archaia Entertainment has announced a new graphic novel, Hacktivist, based on concepts from actress Alyssa Milano. 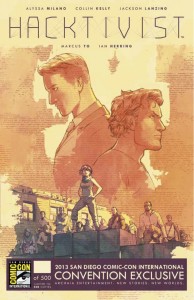 July 16th, 2013 – Los Angeles, CA – Award-winning publisher Archaia Entertainment and actress/producer Alyssa Milano (Charmed, Mistresses) are proud to announce Hacktivist, a hardcover, original graphic novel that explores the modern world of hacking and global activism. Inspired by current events from around the world and Milano’s own philanthropic endeavors, Hacktivist is a fast-paced cyber-thriller about friendship and freedom in a time of war. The story follows Ed Hiccox and Nate Graft, the young founders of the world’s most innovative social media company who moonlight secretly as one of the most notorious black-hat hacker teams on the planet. When the U.S. government discovers their operation, they must face the real world beyond the code and choose between loyalty and what they believe to be is right.

“I’m very involved with in global activism and philanthropy. I like the idea of everyday people doing good,” explained Milano. “My inspiration for Hacktivist is actually Jack Dorsey, the creator of Twitter and Square. I picture him leaving the office at night and going home, where he locks himself in his room and starts hacking to change the world.

“I felt Hacktivist was a strong story that I really wanted to tell visually,” Milano expressed. “Doing a graphic novel allowed me to dream big and it gave me the freedom to create without boundaries.”

“Hacktivist is literally ripped from headlines,” said Archaia VP of Development Stephen Christy. “It’s a story focusing on the benefit and consequences of our increasingly connected world. To be able to bring Alyssa Milano into the world of comics is very exciting for all of us at Archaia, and by teaming her with Marcus To and Ian Herring fresh off of their brilliant work on Cyborg 009, we’ve built a comic that will hopefully connect with and inspire people all over the world.”

Hacktivist will debut digitally in Fall 2013, followed by the hardcover print release in Summer 2014. A Hacktivist Ashcan comic, limited to 500 copies and containing exclusive preview content, original concept art from Marcus To and Ian Herring, and an interview with Milano, will be distributed for free at the Archaia booth (#2229) at Comic-Con International in San Diego, Calif. (July 17-21).

About Archaia Entertainment, LLC
Archaia is a multi-award-winning graphic novel publisher with more than 75 renowned publishing brands, including such domestic and international hits as Mouse Guard, Rust, Cow Boy, Cursed Pirate Girl, Gunnerkrigg Court, and Artesia. Archaia has also published an entire line of graphic novels in partnership with The Jim Henson Company, including the multiple award-winning Jim Henson’s Tale of Sand and such beloved tales as The Dark Crystal, The Storyteller, and Fraggle Rock. Alongside these celebrated titles, Archaia has released English translations of numerous renowned foreign titles to much fanfare, including The Killer, Sergio Toppi’sSharaz-De, and The Secret History.

In addition to its partnership with The Jim Henson Company, Archaia has forged creative partnerships with storytellers in all facets of the entertainment industry, resulting in print and digital expansions of such noted properties as Bleedout and HAWKEN (video games), Immortalsand Planet of the Apes (film), and Space: 1999 (television).

Archaia has built an unparalleled reputation within the creator community for producing meaningful, transformative content, building one of the industry’s most visually stunning and eclectic slates of graphic novels.