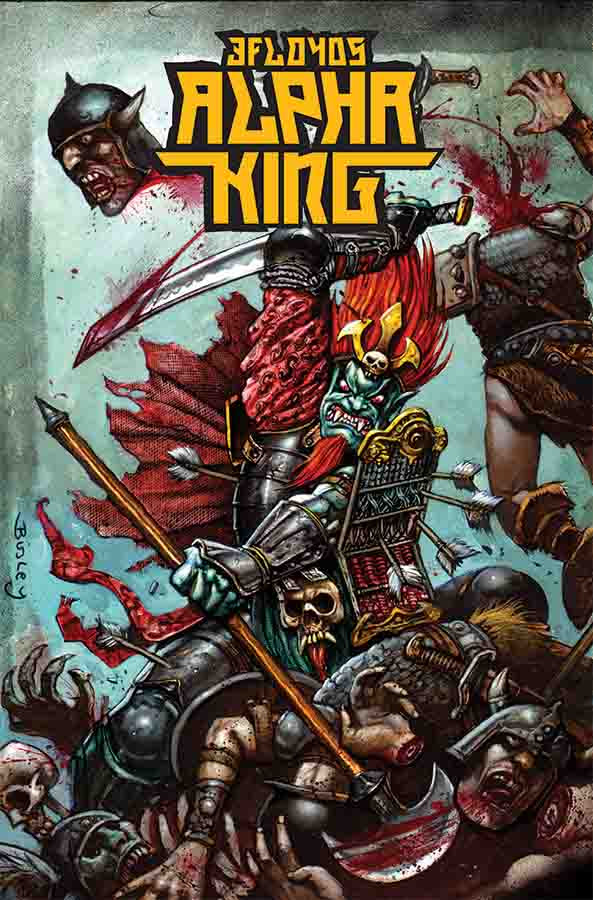 One thing that legendary cult microbrewery 3 Floyds is consistently is “not normal,” and in celebration of this originality, pub-crawling creators Brian Azzarello (100 Bullets, Dark Knight III: The Master Race) and Simon Bisley (Hellblazer, Lobo) have teamed up with 3 Floyds founder and brewmaster Nick Floyd along with colorist Ryan Brown and letterer Jared K. Fletcher to delve into the twisted mythos behind the brand in ALPHA KING. Issue #1 will be on tap this May.

“This book is what happens when beer and comics conceive on a barstool,” said Azzarello. “I’m a proud poppa.”

ALPHA KING is set a long time ago in a metropolis far, far away (Hammond, Indiana), where Brewer and CiCi are producing a home-brew so distinct that it attracts the attention of a monstrous king and his horrid minions from another dimension. Swords are unsheathed, lines are crossed and sieges are laid for the rise of the Alpha King.

Featuring the insanity created by 3 Floyds—from their bottle washers to head brewers—this all-new series is a heavy metal mad mash-up through a futuristic medieval apocalypse. Zombies? Check. Barbarian hordes? Check. An Arctic Panzer Wolf? Sure, why not?

“I love the smell of hops in the morning…” added Floyd. “It smells like victory.”

As any Beer Geek can tell you, 3 Floyds brews some of the best and instantaneously memorable beers going today. Azzarello and Bisley bring their vision to the strange and wild characters created by 3 Floyds… guaranteed to be a hardcore epic that is “not normal” from the first page to the blood-and-beer-soaked conclusion. Cheers!