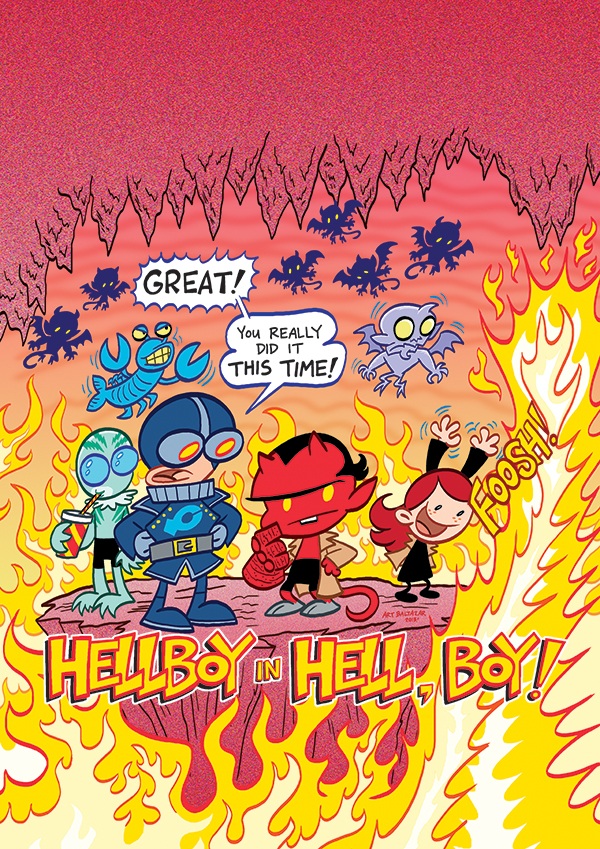 Dark Horse Comics has announced an all-ages Hellboy title set in the Mignola-verse by Art Baltazar and Franco Aureliani. 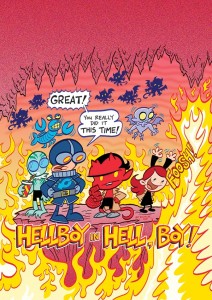 CHICAGO, IL, APRIL 28–Art Baltazar and Franco Aureliani have created quite a stir with their work on some of the most fun and ageless comics of all time. They won an Eisner for Tiny Titans, their treatment of DC Comics’ Teen Titans, and their recent Kickstarter campaign for their Aw Yeah Comics series surpassed its goal in record time.

A ghost named Rasputin has been spotted. And Hellboy and the B.P.R.D. are going to find out what’s he up to. Who is Hellboy, anyway? Why does he have such a big hand, and what is it used for? Who’s weirder, he or his friends? What is the B.P.R.D.? And what does chicken soup have to do with all of it? All this and more will be answered in the debut issue, where BIG things happen to Itty Bitty Hellboy!

“Itty Bitty HELLBOY! WOW! Such awesomeness! I haven’t screamed so much AW YEAH SHOUTOUTS in all my life! It is truly an honor to be the next creative team to add to the HELLBOY saga! I have been a fan of Mike Mignola since Hellboy’s early days at Dark Horse LEGENDS! It’s true. Can’t wait! Itty Bitty has never been so HUGE! AW YEAH HELLBOY!” said Art Baltazar, famous cartoonist.

“We get to work on HELLBOY? HELL YEAH!” exclaimed Franco Aureliani. “One of the most iconic characters in all of comics, and we get to bring our own style and story to it! Truly a dream come true! We’re big fans! Itty Bitty Hellboy is going to be a lot of fun . . . and we get to actually say HELL(BOY)!”

“Given the recent developments in Hellboy’s life—falling in love, discovering that he’s the rightful king of England, having his heart torn out and dropped into hell—this is clearly the next logical step in his evolution,” said Hellboy creator Mike Mignola.

For more information, check out the exclusive interview with Art & Franco on Nerdist News!

Itty Bitty Hellboy #1 arrives on shelves at your local comic shop on August 28!