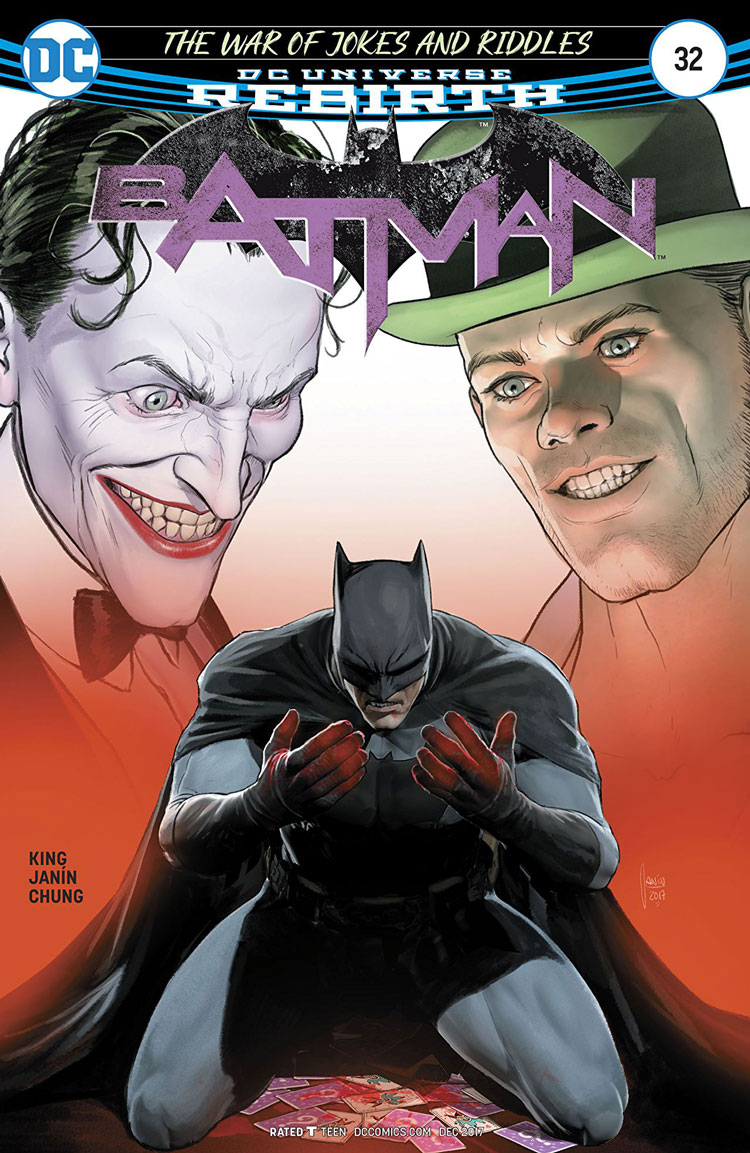 The end of “The War of Jokes and Riddles” is finally here! We’ve traveled all over Gotham across eight chapters of Joker not smiling and Riddler laying traps and wheels within wheels to spread his reign and win, and it all comes down to three men who know the cold hard truth about Batman. In the present, King continues to push his humbled Bruce Wayne to elevated heights with the answer that’s been on everyone’s minds since issue #24…

Throughout the entirety of TWOJAR, King has given us an almost “episodic” take on the seemingly long spanning war between Joker and Riddler, the focus throughout remaining solely on Batman. This arc was believed to be one of the skeletons in Bruce’s closest that he needed to air out to potential bride-to-be Selina Kyle and so far, it’s somewhat lived up to it’s name as a story worth keeping hidden.

TWOJAR ends exactly where it began, with three men (with the included Kite Man) battling it out in one final fight for Gotham City and it’s a lot to unpack here. Cowles and Janín let loose as the letters POP off of the pages as punches are thrown and weapons are grabbed as a three way grudge match takes place across a slew of panels.

Janín makes it crystal clear to follow the action as it escalates and the lettering of the blows take different colors and sounds and that’s all before Riddler crashes the party with the breakdown of what the entire War truly was about in the first place.

King has written an absolutely evil and calculating Edward Nygma and he puts the cherry on top with his conversations between Batman and Joker at the top of the building. He’s written Riddler as a man that’s thought of every last detail in this war game and the interrupting Batman is treated not as another player, but a minor annoyance in scenes that detail how everything isn’t about the big bad Bat.

The meltdown Riddler has elaborates on the entire War plot in full and bring King’s mainstays full circle with their “real” roles in the Joker’s and Riddler’s Game. It’s oddly tragic for the grand scheme of TWOJAR for it to boil down to a feud between a joke and riddle but then again, that’s how it started in the first place right? He even digs into Batman with why the villains keep him around long enough to have a fight.

Throughout the finale that is this conversation, Batman remains quiet and stark against the yelling Riddler and monotone Joker and it’s thanks to the Kite-Man Interludes that we get the moment that changed Batman and led to this story being told in the first place. The foreboding of what’s to come starts off slow, almost ghostly, as most of the color and action remains on the oblivious Riddler ranting.

The unthinkable act that no one saw coming happens and it’s jarring if you think of Batman as he is, not as he was. A man pushed to the brink and well beyond that tries to end it all and the flashback that haunted Bruce Wayne well beyond those years is over. The War of Jokes and Riddles ends not with an explosive boom but a intimate rush of emotions and realizations about who you are and what you can be.

In the present, the moment we were promised and this is another part where King shines, the Bat and the Cat. Bruce and Selina have been playing the “Will they, Won’t they?” game for decades and in certain instances they have tied the knot and gone into marital bliss. Selina says her piece about the lives they’ve lived and what their respective histories mean in the grand scheme of things and the very apt answer of “Who cares?” is right on the money.

Between the two of them underneath the Chung colors who has done everything from the sunshine to the darkness of Gotham and the bedroom, the answer that’ll make Batman fans everywhere cheer or scream is on the last page and as one arc closes, another one opens because King and company just made Batman’s and Bruce’s(?) life one hundred times more complicated.

The War of Jokes and Riddles through some missteps and lopsided pacing for the arc as a whole King, Janín, Chung, and Cowles have given us a story arc that is all about Batman for better or worse and two of his most popular Rogues that solidify why they’ve been around for as long as they have. Chung and Janín are forces of nature as facial expressions and character’s emotions are key for this arc that’s all about emotional payoff and is surprisingly human and humbling for everyone involved.

While “The War of Jokes and Riddles” doesn’t maintain the grand scale of earlier chapters, it zeroes in all of the people and story beats that made this unorthodox tale a surprising read for the Summer with a finale that’s sure to be talked about in the upcoming months.