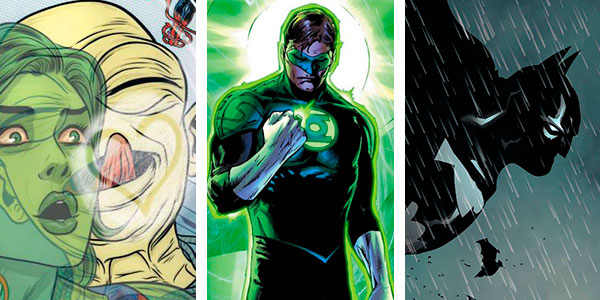 The year is winding to a close, which got us to thinking…what were the best comics of the year? The Comicosity staff has gathered and submitted their top picks of 2013, today being Best Single Issue:

Ryan Ferrier (Tiger Lawyer) and Valentin Ramon are off to a great start with this new series from Monkeybrain. D4VE (pronounced Dave) is an angst-filled robot who has been forced into a 9-5 desk job after the successful extermination of the humans. A tongue-in-cheek look at the post-post-apocalypse, D4VE #1 had me from the first page. 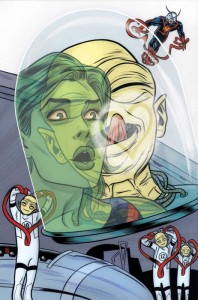 It’s Valentine’s Day and writer Matt Fraction and artist Mike Allred take the beloved Jennifer Walters, a.k.a. She-Hulk, out on a date with her former flame Wyatt Wingfoot. But her Moloid child admirers Mik, Korr, Turg, and Tong might have something to say about that. It’s ridiculously adorable, fun, and Allred’s She-Hulk may be my favorite looking female superhero ever. 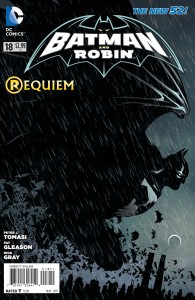 The death of Damian Wayne, Batman’s 10-year-old son, was one of the most emotionally significant events in DC Comics this year. While the deed itself happened in the pages of Grant Morrison’s Batman, Inc., the fallout was largely handled over the long term by Tomasi and Gleason in Batman And Robin. Issue 18 was the most powerful response, conveying Bruce Wayne’s anguish and loss across 20 dialogue-free pages. The silence of the pages was as soul-crushing as the visuals themselves. I freely admit that by the end of the issue, I was outright sobbing. Even if you were among Damian’s (many) detractors, the story of a parent losing their child is going to get to you. Tomasi and Gleason deserve high accolades for saying more with less, and giving readers an honest, believable picture of death and grief. 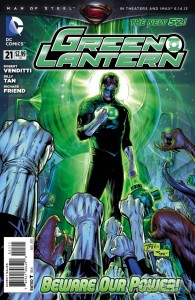 I’ve been a Green Lantern fan for quite some time and Geoff Johns’ last issue on the series is one of my all time favorite single issues. I keep a reading copy with me to pull out during random moments and my first original page art purchase was a piece from this issue. I thought it was an incredibly satisfying ending to his epic run, especially as a Sinestro fan. And as much as I was simultaneously dreading and anticipating the end of Johns’ run, the dread and anticipation was perhaps worse for what was to come after. I’m going to be frank and say that compared in a vacuum issue #20 is better than #21. But its when you consider what each issue represents that the divergence happens. Venditti did far more than simply not suck, he opened a lot of new and very important doors in the Lantern-verse. He stepped very easily into the role of architect on the Lantern books and created a new status quo that is satisfying to both new fans and old. As I said previously, Venditti proved that while Johns created the definitive voice for Hal, he wasn’t the only one who could speak with that voice. And again, my thanks goes out to both writers for their critical role in my comics life.

No comic book put a smile on my face quite like Jason Aaron and Ed McGuiness’ Amazing X-Men #1. The return of Nightcrawler was everything I wanted it to be and then some. I can honestly say that the first 12 pages of this issue are as fun as I’ve had with a superhero comic in a long time. No other issue of any other comic this year made me wish I was a kid again so I could go run around outside and play pirates without looking ridiculous. There were other issues of other books with more serious emotion, and more gravitas, but I read comics as entertainment. The most important part of entertainment is having fun and Amazing X-Men #1 was as fun as it gets. 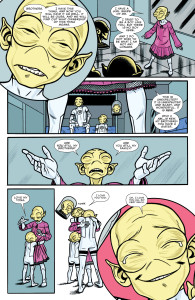 My best single issue is actually only a single page in a single issue: the announcement by Tong to her Future Foundation classmates that she is transgender and would prefer to be viewed as female. It encapsulates a ton of what is so endearing about Fraction and the Allreds’ series (with able assistance here by guest artist Quinones), but also is funny, heart-wrenching, smart and meaningful above and beyond anything else we saw this year.

This one hit me right between the eyes. I might have welled up, I might not have…this isn’t the time or place to discuss that, but Batman And Robin #18 was the most powerful single issue to strike me in the calendar year 2013. No words are needed by this team to evoke emotions that leap from the page and tell the most powerful Batman story of the year, and it wasn’t even in the acclaimed Batman series. The lack of dialogue in this issue is no gimmick, as words simple aren’t required to show the emotion of what Bruce Wayne was going through after the loss of Damian and I think this issue was yet another example of how well Tomasi & Gleason understood Damian and his relationship with the Bat-family. This is visual storytelling at it’s finest and a great example of the power of comics as a medium.