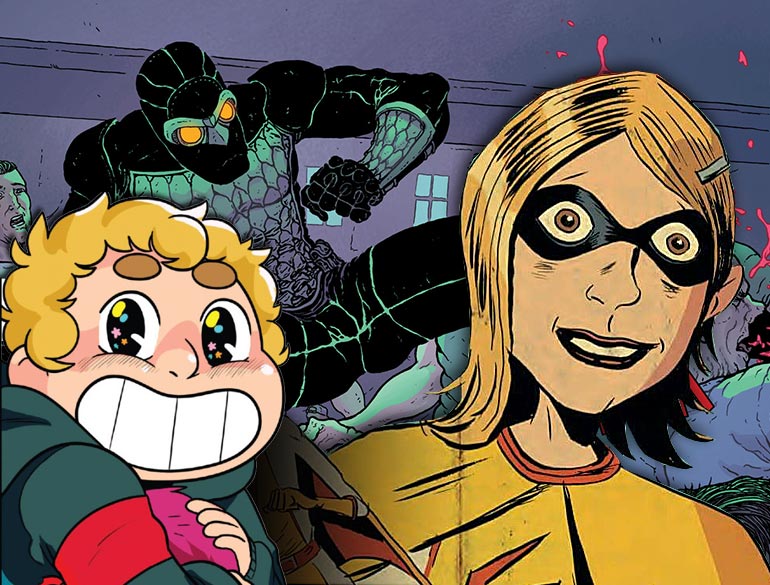 The year is winding to a close, which got us to thinking… what were the best comics of the year? The Comicosity staff has gathered and submitted their top picks of 2016, today being Best Series: 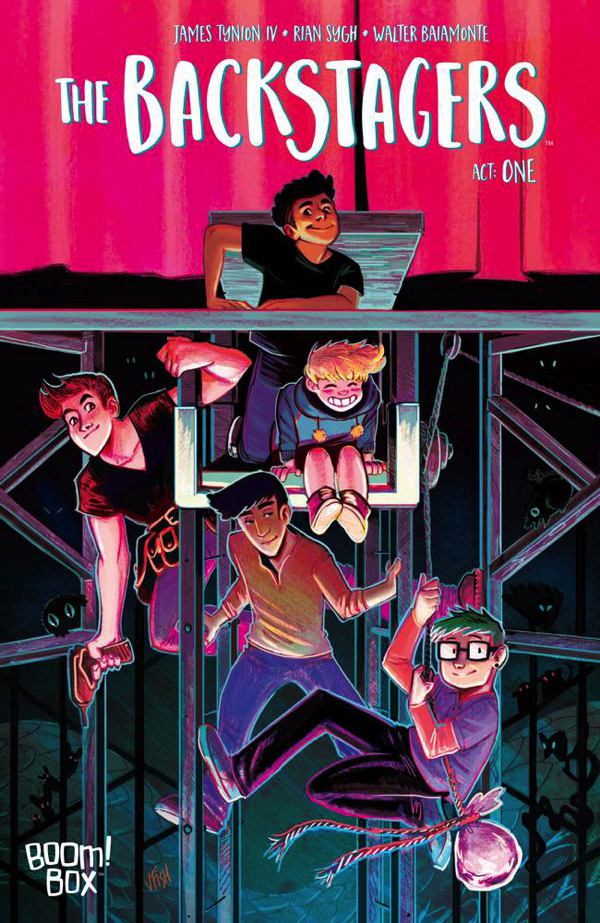 In a world where we discuss adequate representation, Backstagers is a series that I feel captures the range of male and masculine identities. No one is the same and everyone is cast in a light that is redeeming. While we still need to dedicate time to expanding representation of women, non-hetero peeps, and trans peeps, it is nice to have a comic like this which eschews common and ‘accepted’ masculinity for characters who run the gamut of how we typically perceive men and the ways to challenge oppressive ideals of masculinity. 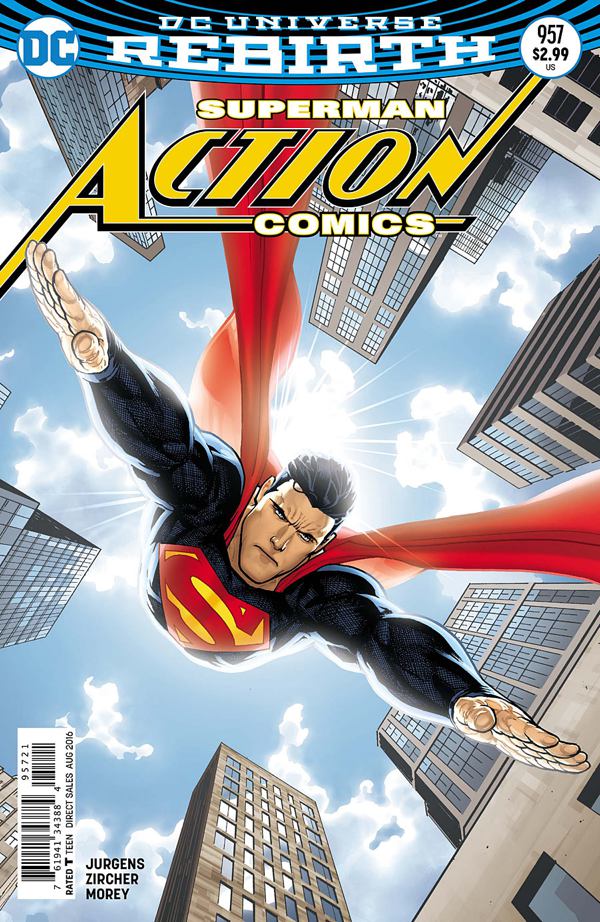 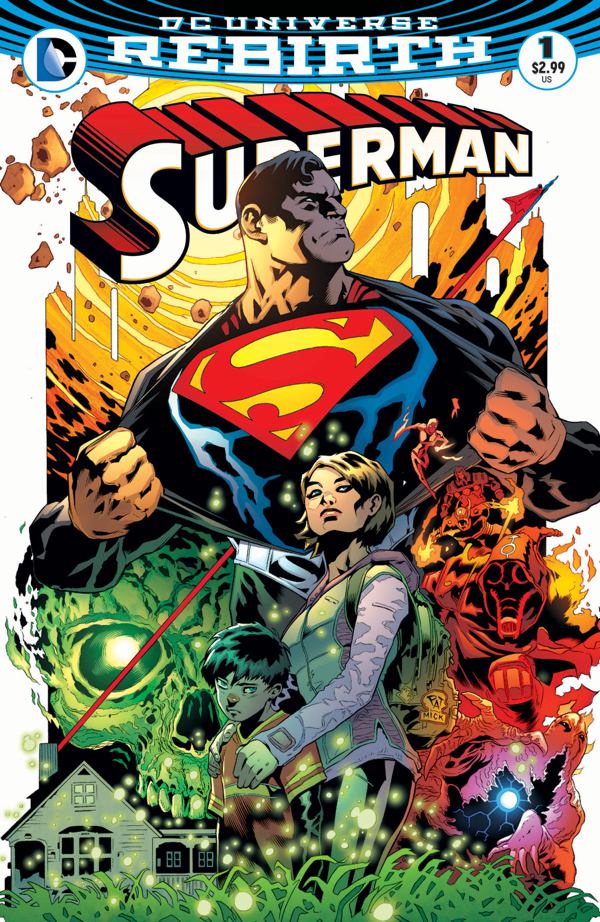 Just a triangle numbering away from perfection, the return of weekly Superman stories with tight continuity, developed supporting casts, and exciting tales has been a treat. 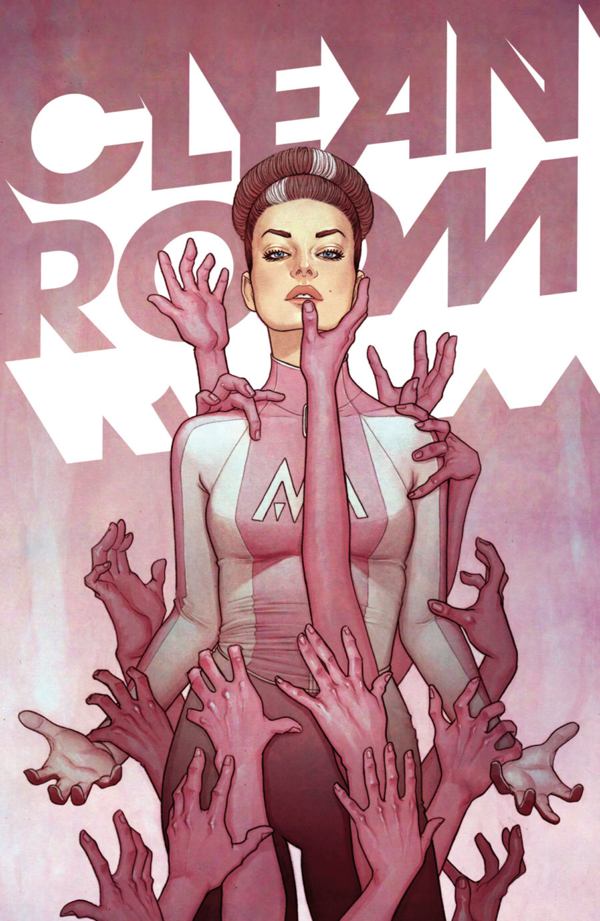 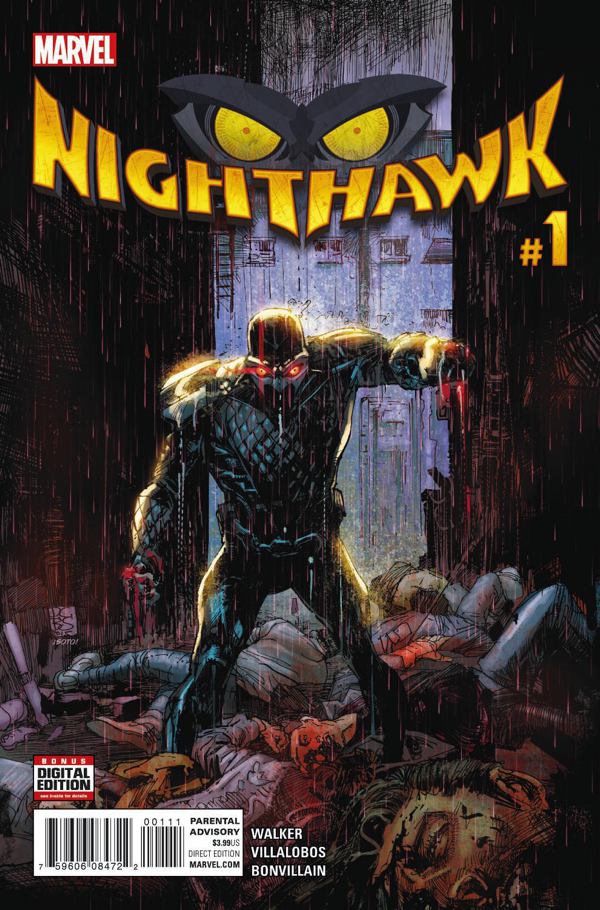 Nighthawk The series that had a message to tell and David Walker, Ramon Villalobos, and Tamra Bonvillain told the tale of Nighthawk and Tilda in a no holds barred manner. A series like this could be considered lightning in a bottle. An all too real location and time for the backdrop of the series makes for a comic mirroring reality in the best possible way. David Walker highlighting the violence and recent events in the city of Chicago was captured in a way that only could work for a character like Nighthawk. A six-issue run that punched, kicked, and violently delivered the message of heroism and what citizens can do to change their surroundings. Nighthawk clawed its way to the top and while the time in the sun was short, the book’s impact is definitely felt.

Runners-Up: Ultimates, The Wicked + The Divine 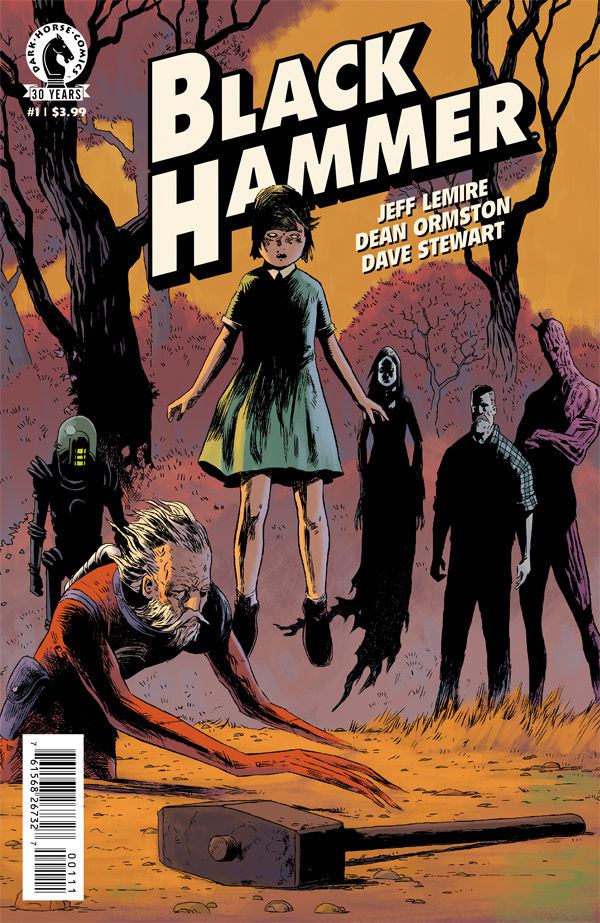 I came for the powerhouse creative team, I stayed because they delivered beyond my wildest dreams. Black Hammer is a step into the crazy life of a semi-displaced team of ex-superheroes, trapped on a rural farm home far away from action. Written by Jeff Lemire and drawn by Dean Ormston, Black Hammer is the biggest hit of the year for me. I rode the emotional roller coaster up and down the pages of this book, falling more in love with each character every issue. Every time I didn’t think it was possible to shed another tear or snort out another chuckle, the creators pulled my heart from me. The book looks great, reads great and belongs in your hands at any and all cost.
Runners-Up: Unfollow, Dept. H, Paper Girls 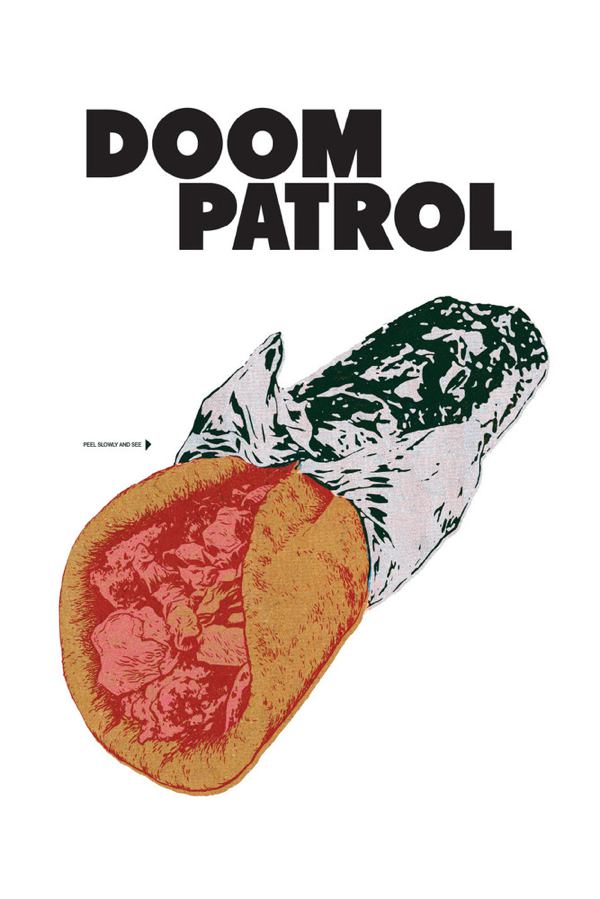 C’mon. It’s Doom Patrol, baby. As an adjunct Waiting For Doom (check out the podcast, right here) faculty member, I can never get enough Doom Patrol. To make it more interesting, Gerard Way chose to anchor his “pop-up” Young Animal imprint with the Patrol. And proceeded to fill it with all sorts of Doom Patrol homages, Grant Morrison riffs, and ideas that land somewhere between or beyond Morrison’s DP and Way’s Umbrella Academy. We only got three issues in 2016, but those three issues packed more in than most series do in a full year. 2016 was a fine start for the Doom Patrol, but 2017 looks to be even more impressive. 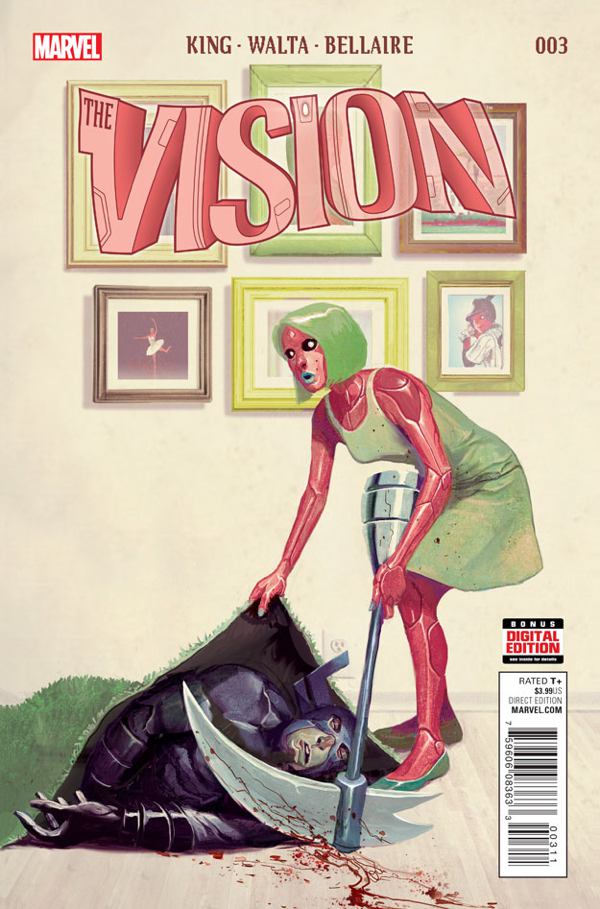 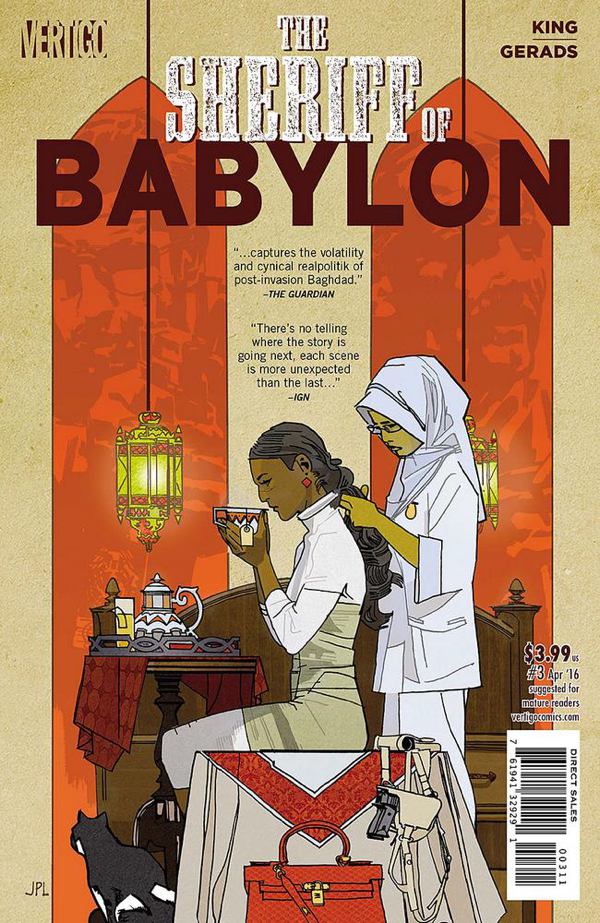 Tom King, Mitch Gerads, Gabriel Hernandez Walta, Jordie Bellaire – Marvel Comics/Vertigo Comics
How can I choose between the two? On one hand you have an entry into the superhero pantheon that rivals the best of Alan Moore. The Vision took a b-list Avenger, and turned his story into the closest thing mainstream superhero comics has to literature. On the other hand you have the best comic to come out of the new look Vertigo, and one of the best fictional stories about the Iraq War.

What they have in common is Tom King, and art teams that took the words King wrote in his script and elevated them above and beyond. Mitch Gerads was able to cement his status as the premiere war artist of this era, while Gabriel Hernandez Walta and Jordie Bellaire made The Vision more beautifully haunting than any comic this year. What the creative teams of these two comics did in 2016 is nothing short of extraordinary. On top of everything the teams stuck the landing when so many other comics stumble at the finish line, or fail to get there. With so much in common, including the writer, and such high quality, it was impossible to choose between the two. 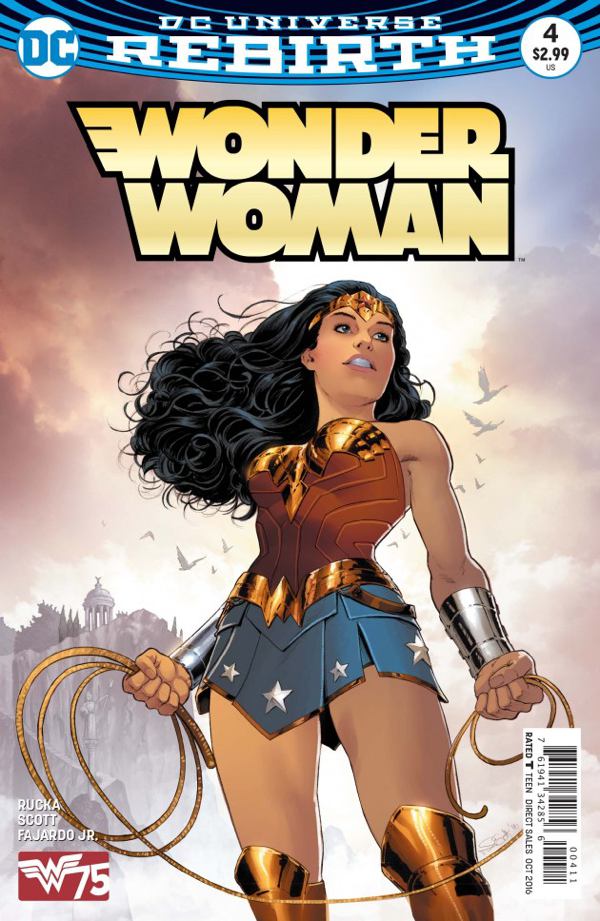 I have never followed a series that has given me so much to think and write about, without fail, every single issue. Every one. Because the work Rucka, Sharp, Scott, and company have put into re-envisioning the history and legend of Wonder Woman doesn’t just stand among the best Wonder Woman treatments in her 75 year history, but stands far and away as the most compelling, thoughtful, rich, and moving series of the year. Every member of the creative team is giving their full heart and soul to the book and the unfettered result is as magnificent as Diana herself. 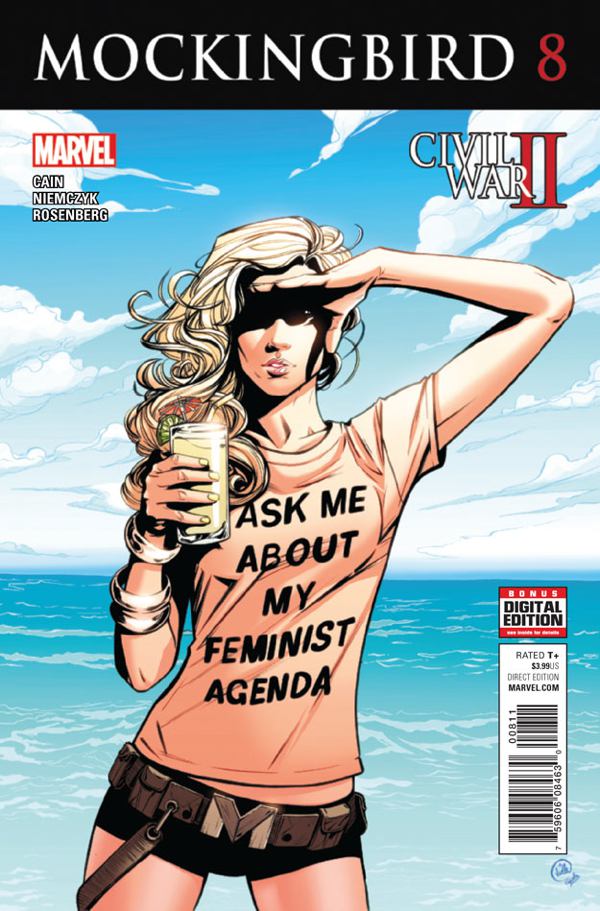 I was excited about this one, as I’ve always liked Mockingbird, but what Cain, Niemczyk and Rosenberg delivered was beyond my wildest imagination. This is character defining work from this team, in the way Kelly Sue DeConnick revitalized and elevated Captain Marvel. Mockingbird is an A-list worthy character when given life by this team and every single issue entertained me to no end. This series was a fireball of hilarity, action and corgis, and I am extremely grateful we got to experience it.

Runners-Up: The Mighty Thor, The Autumnlands, The Omega Men