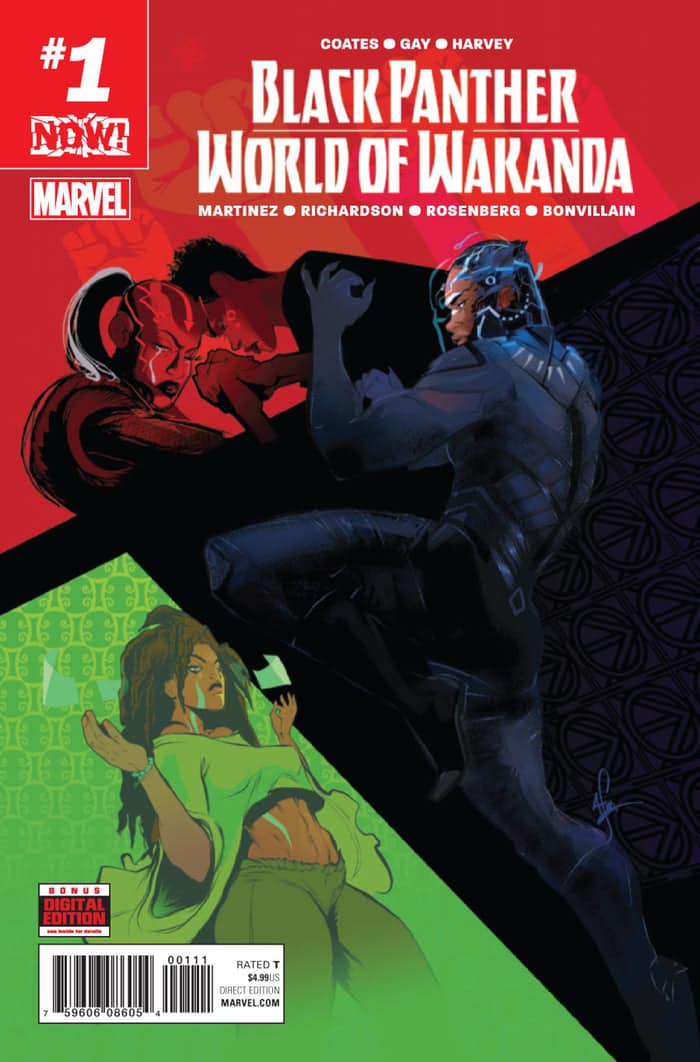 Ayo is one of the newest recruits for the Dora Milaje, the Black Panther’s own squad of warriors. Her tenacity knows no bounds, even when humbled by her captain, Aneka. As these two forge a deeply emotional connection, the other Dora Milaje initiates are learning the ways of the Wakandan warrior. Once they all reach the final moment of their training, a familiar event frames the story with a catastrophic cliffhanger. Meanwhile, we also get a glimpse into the enigmatic Zenzi and what motivated her present appearances, adding a new perspective on events in Wakanda and challenging the ideals of the Panther.

Black Panther: World of Wakanda #1 takes us into the lives of the Dora Milaje, showing us what it looks like as they arrive, as they are initiated, and as they form the capacity for intimacy beyond serving together. I like how each of the story elements work together and that there are two primary stories that don’t have to compete for attention. We have the romance between Ayo and Aneka which changes the flair of each character as they train, but also the development of this force as a whole. It’s nice to see so many black women on the page and that they show us a range of emotionality. I look forward to seeing more personalities emerge and how they fit within the larger picture.

Roxane Gay’s thoughtfulness in crafting the characters, particularly Ayo and Aneka, is exemplary to the point that I wish more writers would follow suit. Reading about the development of women tasked with being their country’s warriors was enough, as I liked the emergence of their unique skills. This relationship, though, is what I wanted to read the comic for and Gay provides an inclusive and authentic exploration into sexual orientation and how it manifests. Characters’ interactions seem fitting for the setting and nature of the story, and Gay has proven that writing these types of stories is absolutely possible.

Yona Harvey and Ta-Nehisi Coates’ exploration into Zenzi’s past reveals more of her motivations within the pages of Black Panther. World of Wakanda feels like the appropriate place to look at her past, providing a new context for her other appearances. This story reflects the pain and struggle of division and how we stratify culture even among the same people. Zenzi as a character is evocative and compelling, and Harvey and Coates explain her motivations and connections to Wakanda in a manner which reveals her as much less a villain than someone with a passionate determination to right the wrongs that surrounded her life.

Alitha E. Martinez hits many important touchstones when portraying black women. Their hairstyles are different, their bodies are different, and they reflect a range of emotionality and sensitivity. These cultural touchstones in art provided by Martinez pushes World of Wakanda #1 to a place we need more of in comics. I love Rachelle Rosenberg’s polished take on color. This entire issue is clean and fresh, offering an everyday kind of appeal to the visuals. Rosenberg’s style changes in the last page, the gloss of warm colors and shadows evoking the dread we will eventually face in the next issue, taking us from the normal day-to-day for Dora Milaje initiates into the reality of their role in Wakanda.

Afua Richardson’s art embraces Zenzi’s experiences growing up, including the complicated emotions which lead her to where she is now. With parts emotion, parts realism, and parts superhuman, Richardson conveys the various parts of Zenzi’s history which impact who she is now. The transitions from soft lines to the jagged appearance of emotion touch on the complexity of living in Wakanda and the fact that moments may quickly change from the soft veneer of everyday life to the rugged struggle for survival.  Tamra Bonvillain tonally guides the reader through an emotional experience mirroring that of Zenzi’s. From the first page of the backup story to its foreshadowing ending, Bonvillain evokes feelings through colors which convey the joy of youth, the sadness of isolation, and the slight serenity of promise and dedication.

I appreciate the care and deliberation evident in the writing and art of this inaugural issue. In a world and in a time where people don’t respect nuance, World of Wakanda is daring to showcase the varying presentations we offer the world. The Dora Milaje is not a bevy of women solely cast as sexual objects; they are warriors, they are cunning, and they are different. This was an excellent creative team to give justice to the women of Wakanda and they have crafted something important in the context of comic and society.