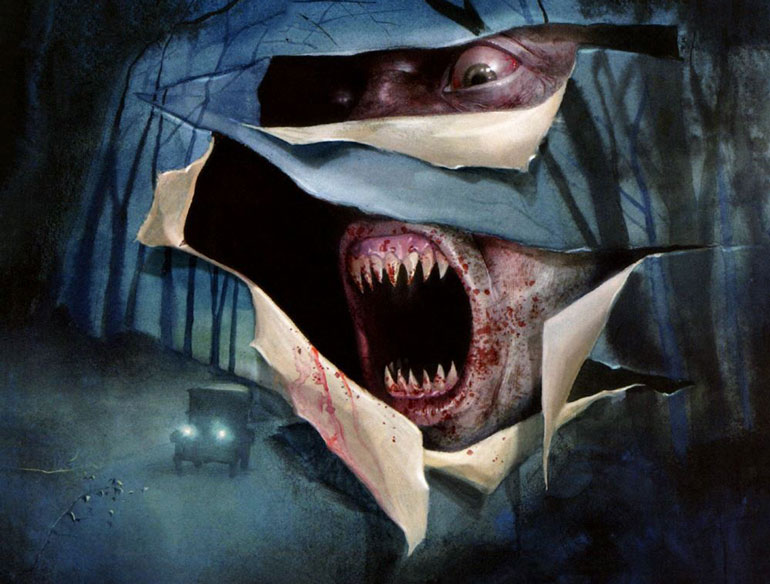 When I was a little kid, probably about six or seven years old, I had this recurring nightmare: A tall thin man would float outside my second floor bedroom window. He was always dressed in a black business suit, and had a gaunt profile with thinning white hair.

I could never quite make out his features through the slats of the window blinds. Bright golden sunlight would stream into my room from behind him, rendering me completely immobile as he watched. And he would just laugh and laugh and laugh.

Even typing those words today give me chills like you wouldn’t believe.

There’s something so utterly creepy about the simplest imagery that just roots into a little kid’s mind and soul. Never once in my dreams did this bogey man try to grab me or even pass through my window. He had no bloody hand, clown mask or giant scythe with which to threaten me. There was a stare and laughter.

His presence was enough to startle me awake, and that sort of palpable atmosphere of fear is difficult to translate into words, much less pictures.

Difficult, but clearly not impossible. Horror comics are nothing new, stretching back in popularity to post-World War II America. Genuine terrors seen abroad made way for tales to titillate young readers, with gruesome fates being meted out every month.

Where a bulk of comics (or movies, or books, or video games) since may have fallen short is in overemphasizing the literal. We’ve all read stories where the monstrous form of a child’s nightmare takes physical shape, splashing blood and brain matter across the page as if it were errant paint on a canvas. Gore may rile the senses, but the subtlety of a bogey man that looks like everyone else, who passes through life unnoticed except to his victims, generates a far more permanent effect. 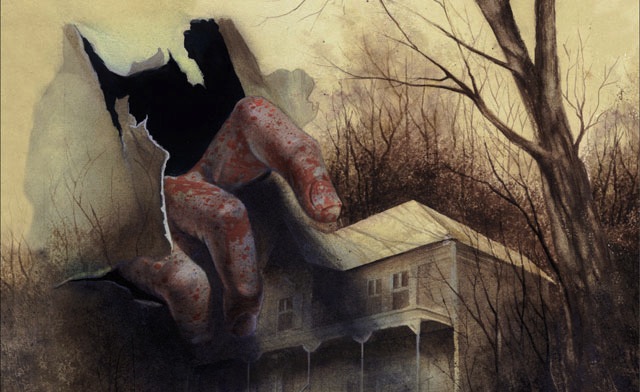 When only YOU can see or feel the horror that is coming to get you — and the panic starts to wiggle almost unnoticeably beneath the skin of your arms and belly — that’s when true fear starts to set in.

No one knows this better than Scott Snyder. Co-writing with Scott Tuft, Snyder delivers Severed, a prime example of just how terrifying the bogey man can be — especially if he looks just like every one else.

Published in 2011 by Image Comics, this seven issue series flashes back on the story of 12 year-old Jack, who has run away from home in 1916 to find his long-lost father. Eager to find a sense of his own identity out on the road, Jack quickly falls in with a traveling companion named Sam, as well as an older mentor figure who just happened to eat the last boy he retrieved from an Illinois orphanage.

Adopting the name Alan Fisher from the man he just killed for it, Snyder and Tuft’s bogeyman casually comes upon the pair in the park as Jack plays his violin for coins. He looks every bit like a man two kids without a roof over their heads could trust. So when “Alan” offers the pair food and a few beers back at his place, Jack agrees without hesitation. 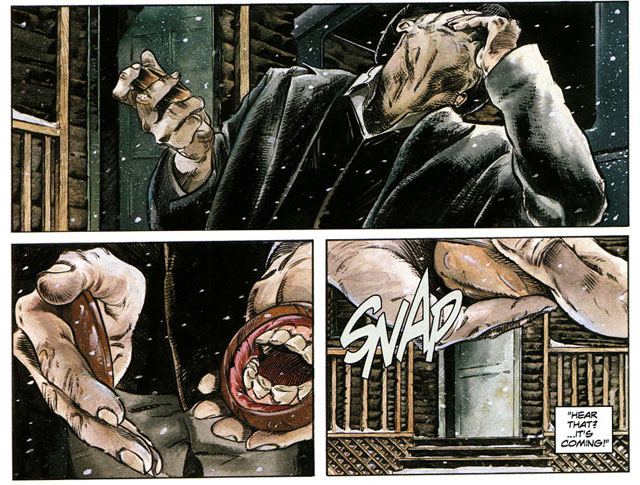 Having just left the secure comfort of his adopted home, Jack is not prepared for the horrors that have been awaiting him out in the cold. That said, Alan is at his most terrifying when his hand is comforting and his appearance remains thoroughly banal.

Attila Futaki’s illustrative style draws a brilliant balance between the everyday and uncanny as he moves the camera’s eye from panel to panel. Much of the true horror of Alan’s threat is ever unseen, only alluded to in a plate of chicken bones, or reserved for large single page reveals.

Moment to moment, Futaki maintains the characters’ bearings with calm line and subdued environments — as if to render a certain artificial calmness about their interactions.

As a result, we witness Alan’s demeanor to be so compellingly trustworthy to Jack that even bringing out an enormous bear-trap to the dining room table seems no more suspicious than any other party game. And to some degree, we momentarily trust as well.

Certainly Jack is desperate for a father figure, so it’s understandable that he would simultaneously be drawn to a man who could fill that role and assist him in locating his actual father. But the further along this road Jack travels, the more we’re left hanging on the edge of our seats in anticipation for an inevitable, terrifying reveal. We know the teeth have been removed, but what lies beyond them is where the truly frightful awaits.

Far from a happy reunion, James Jr. is met with hesitation and dread, for his reemergence from the shadows outside Gotham City means investigations of the past are reopened — suspicions of his true culpability behind a childhood disappearance still weigh heavily on his family. 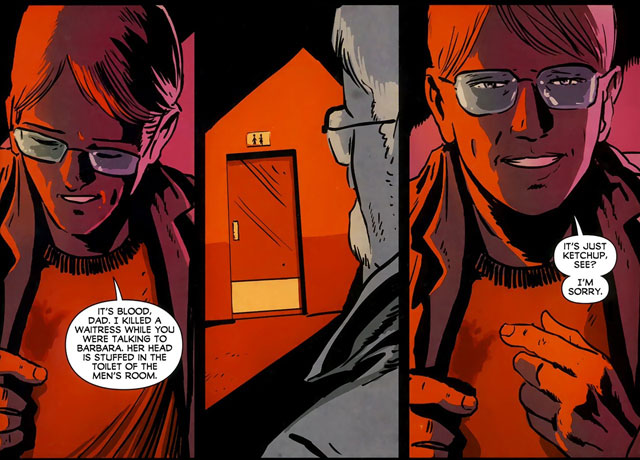 Even more than in the obscured bogey man of Severed, Snyder develops an antagonist in James Jr. that leaves the reader guessing at every turn. We are no more sure than the Commissioner of his son’s guilt as the story evolves.

Having been considered odd from the youngest age — seemingly devoid of emotion even as an infant — James Jr. appears to epitomize the profile for Batman’s more traditional, psychologically challenging foes. Yet his calm demeanor and easily explained activities make for a much more ambiguous villain. James Jr. is Gotham’s usual psychopathic terror turned inside out, an internalized horror well contained in contrast with the usual externalized embodiment of chaos and misery.

Likewise, James Jr. is also an inversion of the standard bogey man mythology in that he is originally a child who is feared by adults, not the other way around. When a friend of Barbara Gordon (the Commissioner’s more famous and heroic progeny) goes missing after calling young James Jr. “creepy,” Barbara’s suspicions immediately go towards her brother, but their father remains torn even fifteen years later.

This is the power of the bogey man, not only to terrorize, but to convince the world at the very same time he doesn’t actually exist. 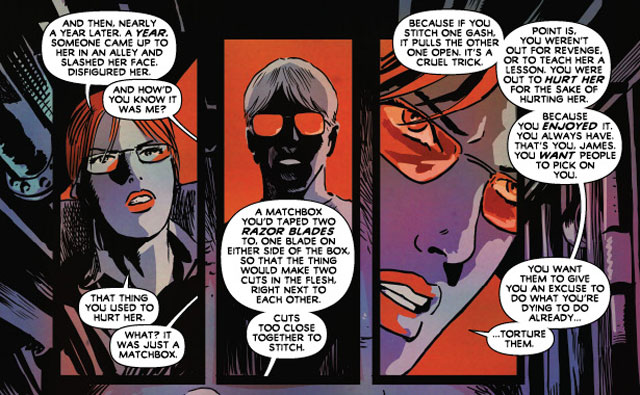 Sharing artistic duties in this volume with the remarkable talent Jock, Francesco Francavilla illustrates most of the story Snyder lays out for James Jr., from his arrival on video at the Gotham aviary to his ultimate confrontation with his much less conflicted sister.

At times Francavilla depicts James Jr. as a hovering monster, whose opaque red glasses imply deeply disturbing thoughts ready to manifest themselves with the flick of a wrist. For most of the narrative, however, the artist maintains the same terrible sense of banality we see in Severed, but in flattened day-glo tones that scream danger without having to depict it literally.

So little of Gotham is ever seen in daylight, but even at night, James Jr. remains more thoroughly darkened than would otherwise — his own shadow even extending over the faces of his more illuminated family members as they interact or discuss his condition.

Scott Snyder and his collaborators have managed to craft on paper that indescribable unease we often can only experience in dreams, or if terribly unlucky, in real life.

It’s been over 30 years since I dreamed of that floating man outside my bedroom window. While I may still shiver recalling the vision, I’m pretty confident those nightmares won’t be returning to involuntarily taunt my adult brain. Whether there will soon be another bogey man lined up to replace him?

Of that, I am now less sure.

A version of this article was originally written for and published online by the Idler Magazine, August 2012.