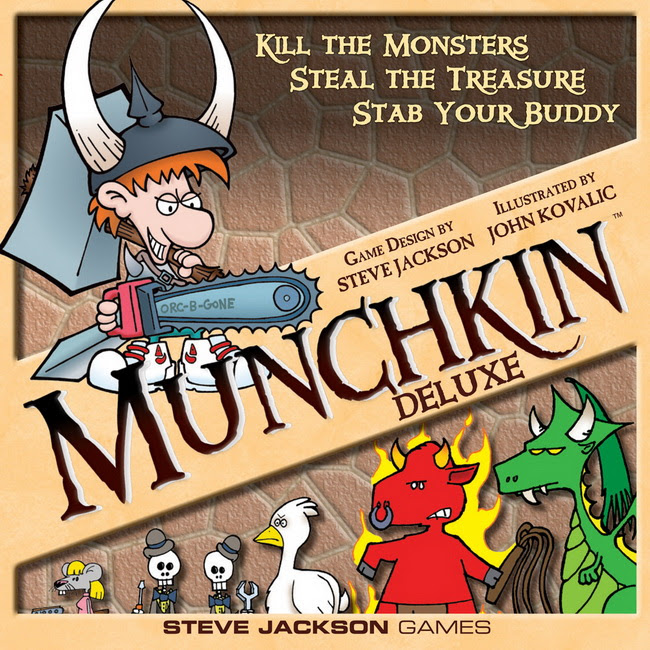 June 16, 2014 – Los Angeles, CA – Pull on your Boots of Butt-Kicking and rev up that Chainsaw of Bloody Dismemberment because award-winning publisher BOOM! Studios and Steve Jackson Games are delighted to announce an ongoing MUNCHKIN comic book series coming this Fall. The MUNCHKIN series will be based on the worldwide best-selling card game where players travel through the dungeon and kill everything in sight in order to gain the best (and weirdest) weapons and highest levels. It’s a hilarious, fantasy role-playing game-inspired spoof that brings friends together…until you backstab them for their treasure. The partnership between BOOM! Studios and Steve Jackson Games was initiated and brokered by Surge Licensing.

“There’s a big contingent of fantasy RPG fans here at BOOM! HQ and Munchkin’s irreverent, wry approach to the tropes of the genre is right in our wheelhouse,” said BOOM! Studios Vice President of Publishing and Marketing Filip Sablik. “It’s weird and wacky, and we can’t wait to explore a side of the game that hasn’t been seen before.”

“The best part of the comic books—besides seeing what sort of wacky stories the creative teams craft around Spyke, Flower, and all of the Munchkin characters—is that Munchkin fans will get to watch as the world of the game expands well outside of its gameland incarnation,” said Philip Reed, Chief Operating Officer of Steve Jackson Games.

Fast and silly, Munchkin can reduce any roleplaying group to hysteria. And, while they’re laughing, you can steal their stuff. The Munchkin card game debuted in 2001 and has since become a worldwide phenomenon. There are now 15 different stand-alone Munchkin card games (all of which can be combined) along with over 20 expansions, plus miniatures, shirts, and much more.

MUNCHKIN #1 will arrive in comic shops this Fall. Further details will follow.