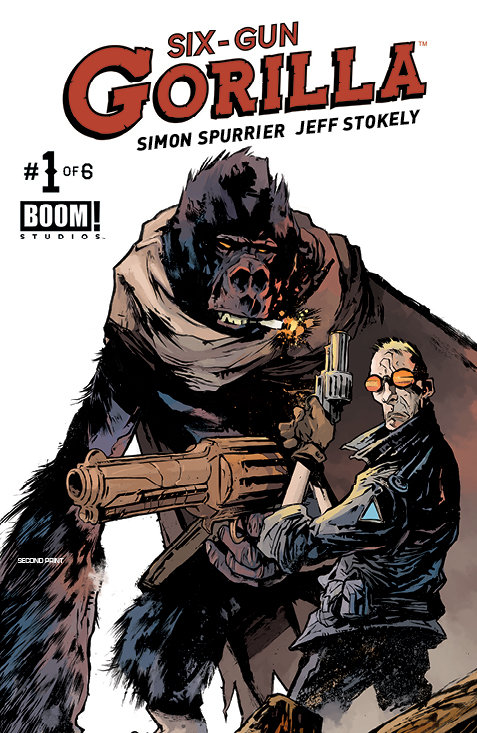 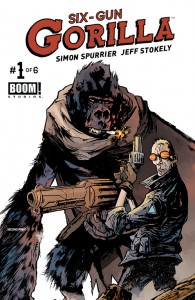 June 13th,  2013 – Los Angeles, CA – BOOM! Studios is proud to announce that in less than 24 hours since its release, SIX-GUN GORILLA #1 has sold out at at the distributor level and the publisher has rushed to a second printing.

Comic book fans should keep in mind first printings of SIX-GUN GORILLA #1 may still be found at the local comic shop nearest you. Not sure where to find your nearest comic retailer? Use www.comicshoplocator.com or findacomicshop.com to find one!

Inspired by an obscure public domain character, SIX-GUN GORILLA is created and written by Simon Spurrier (X-MEN: LEGACY, CROSSED: WISH YOU WERE HERE) with interior art by Jeff Stokely (FRAGGLE ROCK, THE REASON FOR DRAGONS) and featuring a cover by Eisner Award-winning artist Ramón Pérez (A TALE OF SAND, WOLVERINE & THE X-MEN), SIX-GUN GORILLA is a pulpy mash-up of Western weirdness and lo-fi science fiction unlike anything else on the stands!

Welcome to “the Blister” — a bizarre other-world colonized by humans sometime in the 22nd century, which quickly became a hotly-contested source of fertile land and natural resources long ago exhausted on Earth. In this new frontier, a rogue gunslinger and his companion wander across a wilderness in the grips of a civil war, encountering lawlessness, natives, and perversions of civilization in a world at the crossroads between the past and the future. The fact that said gunslinger is a bio-surgically modified silverback gorilla toting a pair of enormous revolvers is neither here nor there.

SIX-GUN GORILLA #1 second print ships with a striking new cover by Joe Querio (EXTERMINATION) with a retail price of $3.99.