BOOM! Studios has announced Say Anything’s Max Bemis will launch Polarity through the publisher this April. 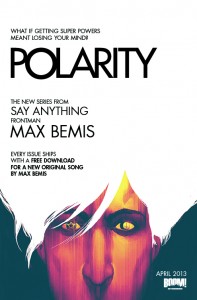 Timothy Woods is a bipolar artist stuck in the world of hipsters, meaningless sex, and vain art — better known as Brooklyn. But after he survives a near fatal car accident, Timothy discovers that his mental instability is more than just a disorder, and that his bipolar medication hasn’t just been subduing depression and uncontrollable mania…it’s been suppressing his super powers! Now it’s time for Timothy to stand up to his disease alongside an onslaught of wretched human villainy as he finally finds his place in the world.

“In perhaps what is the most exciting development to me in my artistic life since I formed Say Anything, I’m thrilled to announce that my first comic series, POLARITY, will be debuting in April through the wonderful folks at BOOM! Studios. I am an obsessive comics fan to say the least so this is the actualization of a long time dream, and I foresee myself continuing to write A LOT in the future, so this will, hopefully, be where it all begins,” says Bemis.

“I think fans of my music in particular will be excited that the roots of POLARITY lie in the story that I created for the musical that never was, but became the blueprint for our first record …IS A REAL BOY. In many ways, this is that same story, told through a different medium,” added Bemis.

SAY ANYTHING music fans will also want to note that every issue will come with a free download for a new original song written and performed by Bemis! Each song will not be available anywhere else and will be written specifically to accompany the comic project.

“Max Bemis is one of the most exciting new voices I’ve worked with in comics,” said Matt Gagnon, Editor-in-Chief of BOOM! Studios. “He’s an astounding creative force who has inspired many with his music and has expertly, remarkably transitioned his artistic vision to comics. I can emphatically tell you that Max is a legit comic book fan and a student of the medium. Get ready for one of the breakout talents of 2013.”

POLARITY #1 ships in April with a cover by Frazer Irving (UNCANNY X-MEN, HIGHER EARTH), along with retailer incentive covers by W. Scott Forbes (FORGETLESS, 27) and Irving. The first issue is a 32 page, full color issue that retails for $3.99 and is available for order under Diamond Code FEB130853.