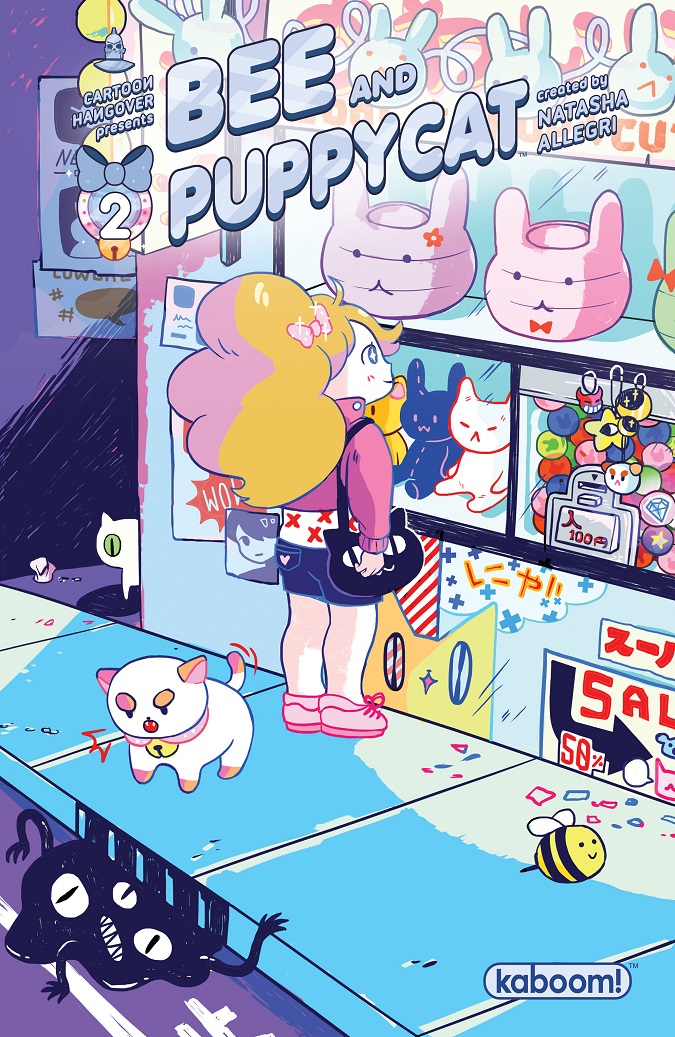 August 26, 2014 (Los Angeles, Calif.) – KaBOOM!, an award-winning imprint of publisher BOOM! Studios, is delighted to announce that, following the sellout of issue #1, Bee and PuppyCat #2 has also sold out at the distributor level. The publisher has rushed to a second printing.

This quirky series from creator Natasha Allegri (Adventure Time with Fionna and Cake) features Bee, the ever-unemployed twentysomething who makes a living as a magical temp worker, and her new friend PuppyCat, the mysterious little…whatever it is…that she stumbled across who has a powerful secret. Fighting bad guys has never been so funny!

Comic book fans should bear in mind that first printings of Bee and PuppyCat #2 may still be found at the local comic shop nearest you. Not sure where to find your nearest comic retailer? Use comicshoplocator.com or findacomicshop.com to find one!

Written by Allegri and Garrett Jackson, and illustrated by Allegri, Bee and PuppyCat is based on the Cartoon Hangover short (which can be watched at https://www.youtube.com/watch?v=lOG_UtLxh58) that went on to become the most funded web series project in Kickstarter history. Allegri had built up a big fan-following on Tumblr while working on the Adventure Time cartoon, then created gender-swapped characters, Fionna and Cake, that became so popular, they were put into the show. Her newest creation, Bee and PuppyCat, is a slice-of-life story with a twist, and it has so much comedy and enchantment you can’t help but be swept up.

“Bee and PuppyCat continues to deliver stories that are charming, light-hearted, and full of quirky fun,” said BOOM! Studios Editor-in-Chief Matt Gagnon. “This is exactly the type of title we need more of in the industry. Natasha, Garrett, and all the creators involved have struck a chord with their work—this second print is a testament to their talent.”

Praise for Bee and PuppyCat:

“Boasting an amazing creative team, a great cast of characters, and infinite possibilities for what’s to come – there is no where to go but up. A great pick for lovers of kawaii characters and chocolate bars.” – Newsarama

“The book is absolutely bonkers, an original and fantastical adventure that would be maddening if it wasn’t also so darn cute.” – IGN

“…‘Bee and PuppyCat’ #1 is a debut with great imagination and style. The tone is unusually complex, surreal, and tender with hints of joy and grief.” – Comic Book Resources

“It’s too adorable to pass up and offers the right amount of pure-hearted humour to keep you coming back for more.” – Comics: The Gathering

“Read it and share it with your son, daughter, niece, nephew, or neighbor’s kids. I cannot say enough positive things about this unique and adorable tale about friendship and adventure.” – Comic Addiction

“Really, there’s a number of reasons to check out this series. Bee and PuppyCat are both hilarious characters and Allegri’s art is downright gorgeous.” – Multiversity

“‘Bee & PuppyCat #1’ is great for both new and old fans alike, and this tale of magical girls and talking cats (dogs?) is off to an amazing, charming start, and is my new favorite thing!” – Capeless Crusader

Bee and PuppyCat #2 second print ships with a new cover by Buntoo under Diamond Order Code JUL148213 and carries a retail price of $3.99. It is anticipated to be on sale September 17th.