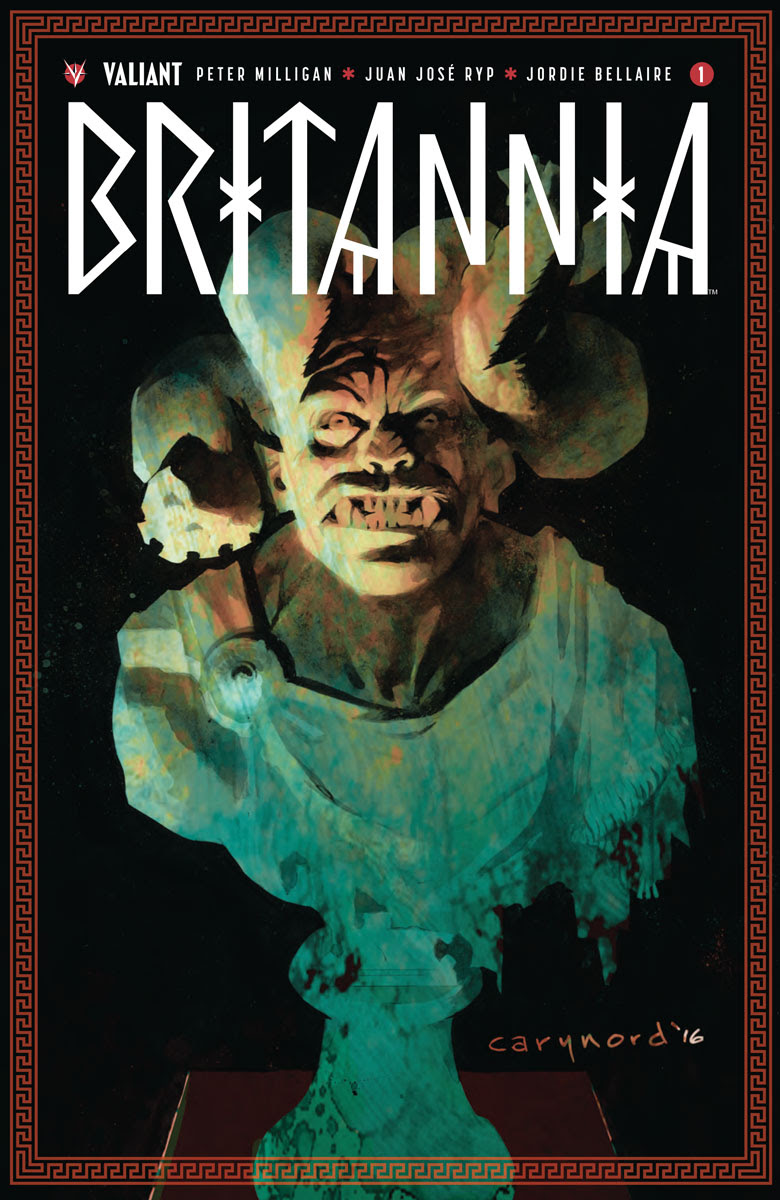 After torrents of critical praise and a blistering first issue sell-out, the most daring series yet from “THE FUTURE OF VALIANT” is cementing its status as the runaway hit of the fall with yet another sold-out printing!

Valiant is proud to announce that BRITANNIA #1 (of #4) – the FIRST ISSUE of the much acclaimed Valiant Prestige-format epic from comics master Peter Milligan (Detective Comics) and incendiary artist Juan Jose Ryp (NINJAK) with multiple Harvey Award nominee Raul Allen (WRATH OF THE ETERNAL WARRIOR) – has sold out at the distributor level yet again and will return to store shelves with the BRITANNIA #1 (of 4) THIRD PRINTING on OCTOBER 26th!

Exploding out of “THE FUTURE OF VALIANT” initiative comes Valiant’s darkest and most haunting series to date! In the tradition of DIVINITY and WAR MOTHER, witness the bold introduction to Valiant’s next pivotal force here with a visionary journey that will send the ancient world’s first detective spiraling into the darkest depths of myth and mystery!

As BRITANNIA #1 (of 4) continues to conquer the comics landscape, critics everywhere are hailing it as Valiant’s boldest and bloodiest debut yet!

“✮✮✮✮½… Wildly Entertaining… You will be begging for more.” – Newsarama

“An immersive entry to grander designs… Expect the narrative, and blood, to fly.” – IGN

“Incredible — the characters, the setting, the storytelling, the violence all shine.” – Nerdist

“A refreshing take on comics… It feels as if Valiant are treading on new and exciting ground.” – Heroes Direct

Ruled by the Fates. Manipulated by the Gods. Commanded by Caesar. In the year 65 A.D., one’s destiny was not his own. At the height of Nero’s reign, a veteran of Rome’s imperial war machine has been dispatched to the farthest reaches of the colonies to investigate unnatural happenings… In the remote outpost of Britannia, Antonius Axia – the First Detective – will become Rome’s only hope to reassert control over the empire’s most barbaric frontier…and keep the monsters that bridge the line between myth and mystery at bay…

On October 26th, don’t miss your chance to jump onboard Milligan, Ryp, and Allen’s acclaimed psychological journey into terror, temptation, and bloodshed. From the darkest of shadows, a brand-new hero will rise, only in the BRITANNIA #1 THIRD PRINTING!

Then, in just one week, Antonius’ mind-bending opus continues in BRITANNIA #2 (of 4)! On October 12th, duty leads to darkness when Antonius Axia, the world’s first detective, is dispatched to a land where order, sanity, and law hold no authority. As reality threatens to unravel with each step into his inconceivable investigation, Antonius must rely on his fractured mind to keep Britannia’s untold horrors at bay…and his very soul from shattering! Be there as Peter Milligan and Juan Jose Ryp lead a phantasmagorical expedition in the lands between darkness, desire, and destruction, only inBRITANNIA #2 (of 4)!

Plus: don’t miss the other must-read series of 2016 as “THE FUTURE OF VALIANT” continues with an all-new wave of ongoing series, prestige format projects and standalone events from a star-studded roster of some of comics’ most visionary talents! Beginning in July with FAITH #1, “THE FUTURE OF VALIANT” will extend throughout 2016 with a total of seven epic series – each introducing an innovative array of new concepts and characters…and firmly establishing Valiant’s place as the premier publisher of creative storytelling in comics today: