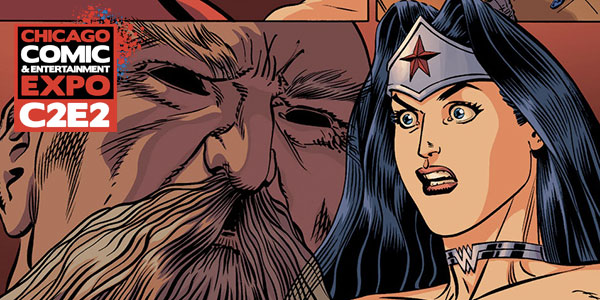 You can’t go to a comic convention in Chicago and not see Brian Azzarello’s wit and charm in action. It’s pretty much mandatory. I had the pleasure of sitting down for a conversation with Brian early Sunday morning to talk about his run on the New 52’s Wonder Woman, bringing the son of Darkseid into the book, and just how things are developing with Diana’s newfound family. 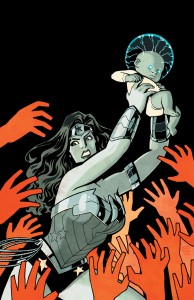 In Friday’s panel at C2E2, you mentioned that you really wanted to take risks going into the New 52. Why do you think that was important specifically for Wonder Woman?

MSG: We’ve seen with the removal of Diana’s gauntlets (issue #12) that power seems to brim within her, much more than we’ve seen before. How do you balance these more outward displays of power against the more subtle displays of intellectual compassion we’ve seen from her as well?

BA: Oh man. If it was just me doing it, there’d probably be no fighting at all. But you’ve gotta fight and throw punches in these silly comic books.

What I was really trying to establish with her is that she solves problems differently than other characters. We were really conscious of making her unique. Her approach to things is different than the way Superman or Batman would approach things. And it was important to do that. You ask people, tell me about Wonder Woman. Oh well… um, she wears shorts. People don’t know. And now you can say, she’s pretty smart and she solves things in a different way than these other characters.

MSG: I thought that was a really interesting observation in the last issue (#19) when she turns around and all of a sudden, she’s a leader, without even intending to be. It’s just part of her nature. 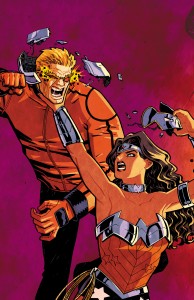 Speaking of this difference, what has your thought process been in bringing Orion (a child of the Gods himself) to the book and how it reflects back on Diana’s own heritage?

BA: I think he’s playing off of her pretty well. And we’re taking a very similar approach to Orion as we did Diana. We’ve got to make this guy unique and give him some layers that maybe he didn’t have before. Orion is an angry guy, but that’s not enough. If that’s all he was, he wouldn’t be in the position he’s in. He has to have things that make him different.

The way that we’ve approached Orion, there’s not another super-hero that behaves the way he does right now.

MSG: Inasmuch as he’s the opposite of Diana, in some sense he’s very reminiscent of War. And your vision of War, both physically and mentally, is far different from any previous iteration. How in your mind has he gone from being a more militant and aggressive antagonist to where he’s at now?

BA: You mean tired of who he is? Yeah, he’s tired of what he represents. I think he’s even said as much — what war is now is not what war was. There’s no glory in it anymore. In World War II, we were fighting for something good, and now? People question why they fight. And maybe they’re not fighting. We’re more cynical now. Why did we go to war with Iraq? Why did we do it?

BA: And that’s very cynical. Thank you for making my point. (laughs) 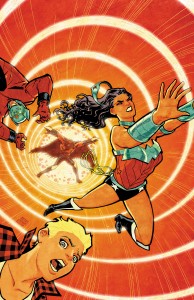 MSG: So, all the Olympian Gods seem to be just a little bit different than before, which isn’t that unusual — every writer over the years has taken his or her own spin on them. How do you think you’re looking at the gods from a more conceptual basis that’s different?

BA: We wanted to get really to the core of these things, and make them look exactly like what they represent. We were very conscious of how we approached them.

MSG: They do seem much more elemental.

BA: Yes. And they’re interesting characters, but they’re not good people. They never were. People worshipped them, but they were also terrible. They did good things and they did completely shitty things, and that’s the way we’re approaching them.

When we decided first to give Diana god-blood, we asked ourselves, what are we going to do with her family? How is she going to feel about that now? She’s part of this family that is pretty bad to people, and she’s not bad at all. I know some fans have said that we’re completely changing her character, but I don’t think we are. We’ve changed the world in which she operates, but that character remains at her core what she always was.

MSG: And it’s not retroactive change, but actually hidden truths that seem to be popping up around Diana at every turn. You have to wonder, how much do you trust her family who are telling the story?

Strife is very interesting in that way too.

MSG: I think she was one of the breakout characters early on, and totally new with no precedent in the stories before. What was the vision behind her?

BA: We wanted to make someone who completely personifies her name. She only shows up when people have strife in their lives and she loves it. 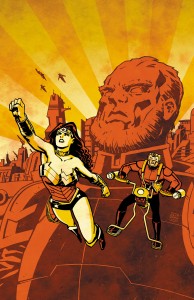 MSG: And ironically, she seems like one of the least antagonistic of Diana’s siblings.

MSG: Any teases or special mentions for the readers at Comicosity?

BA: Well, the next big thing we’re doing is going to New Genesis. We’re going to reveal what that world is like, with Highfather and all that stuff.

Brian Azzarello writes the Wonder Woman ongoing monthly for DC Comics with #20 landing in shops May 15, and will be launching a 100 Bullets: Brother Lono mini-series from DC’s Vertigo imprint in June 2013.