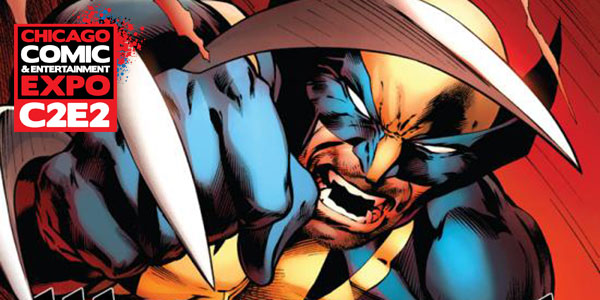 Wolverine has lived through many changes over the years, but death hasn’t often been one of them. Ushering Logan through his untimely demise is writer Paul Cornell, who has recently relaunched the Wolverine solo title during the Marvel NOW! initiative. Paul graciously took time out of his busy schedule at C2E2 to speak with me about what Wolverine means to him and what’s coming up for the man who we all thought was indestructible. 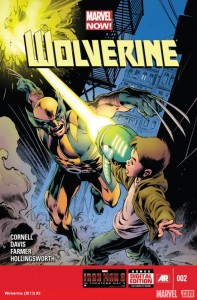 Matt Santori: Thanks so much for taking time out of the con to talk to me, Paul!

What’s been your relationship with Wolverine prior to writing the ongoing series? What was your impression of him growing up, to now?

Paul Cornell: When I was a little kid, I went into a newsagent’s in my hometown and opened up a comic with a very eye-catching cover. I saw a super-hero with claws leaping at a dinosaur man. I thought this was the greatest thing I had ever seen in the history of anything. From that point on I was hooked. I am, as we speak, wearing a t-shirt with the individual panel that I first saw Wolverine in. When I first saw this shirt, I thought, I have got to have that!

Throughout my life, he’s been somebody I’ve always followed. As I get older — and am now in my mid-forties — I find myself really empathizing with him, because he’s a deeply grown-up guy. He’s not a young guy. He doesn’t act like a young guy. He was the equivalent of a hot-headed teenager when he went to Xavier’s Academy, although he certainly wasn’t one. But having lost all his memories, he was there in the world as a hot-headed teenager. Now that he’s got all of his memories back, he’s got all this experience. He’s knowledgeable. He’s well read. But above all, he likes being a normal guy. He likes going to bars and having beers and hanging out with people.

It’s no accident he’s on all these teams. That isn’t just a joke. In story, he’s a very sociable person who likes being around people. I have him say that in issue #3. “Who said I was a loner? I never said anything about that.” We’re going to really push that, because his need for his friends is going to become very, very important.

We’re going to introduce some new friends in issue #3. Wolverine frequents a bar called The Guernica Bar in New York, which is where professionals and specialists in the field of super-heroes, who are not themselves super-heroes, hang out. And they’re delighted to have an actual super-hero amongst them. They include people from Damage Control, comic book writers, and a odds maker for a big bookmaker that specializes in super-hero battles. These are the people he consults about various things. But also in the course of the series, we’re going to have characters like Storm (whom he has a relationship with) and Kitty Pryde and the students from the school appear, because this is a major turning point in his life. 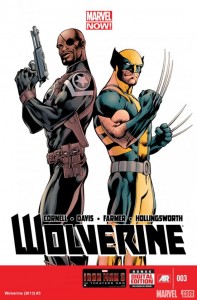 MSG: Key to your run so far has been Wolverine’s relationship to children, specifically the young son of his victim in issue #1. We’ve seen over time Wolverine developing partnerships with young heroes like Kitty Pryde, Jubilee, Armor and other kids at the school. What’s your take on Logan’s attitude towards kids?

The relationship he has with younger folk — as someone who is a father many times over and has all that experience, he feels paternal to just about everyone in the world really. But particularly, he likes people who bring him hope about the future of the world. The young Nick Fury is going to have a kid/old man relationship with him. Logan calls Fury “kid” and he calls Logan “old man.” It’s Butch and Sundance, with Butch being older. That relationship of Logan to younger folk — to people who are pushing the world along — is really important to me and to the book.

MSG: In relation to Logan having grown into this consummate team player, it’s pretty fair to say Wolverine appears in about a million places in the Marvel Universe. How do you work that out in order to tell your story?

PC: It’s just about having stories that don’t take very long. The first four issues play out in just two days. We’re actually going to be doing something in this book that affects Wolverine in the rest of the Marvel Universe, and affects the rest of the Marvel Universe in turn. Historically, because Wolverine’s solo title started much later than any other solo title for established heroes, big things that happened to him always happened in team books. But we want big things to happen to him in Wolverine. 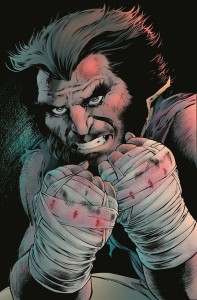 The arc is called “Killable,” which starts in issue #8, for six issues all drawn by Alan Davis. For reasons I won’t go into, it’s possible to kill Logan, and gradually, the world gets to know that. Everybody who has an interest in killing Logan starts to decide they might have a go at it. It begins in Wakanda with the Black Panther and Storm, and we’re taking him on a walk into the Valley of Death with Kitty Pryde by his side. Sabretooth is waiting at the end of it, because everybody at the start of this plot assumes it will be Sabretooth in the end. And of course, they are right.

I wanted it to be rather like From Russia with Love, where you see the assassin who’s going to do the killing right at the start and then right at the end. Then, it’s spiral down to something terrible, and it’s going to be a hell of a journey. It feels like a Western to me — one of those very dark Westerns.

MSG: How has the working collaboration with Alan Davis been?

PC: Oh, it’s brilliant. He can do the two things we really need: big action, and also big emotion. He’s asked me to write lots of emotional description in the panel descriptions. And that really works, because Logan can stay stoic and Alan can show everything in those wonderful expressive faces he does. So, we’re a very emotional comic. We’re hoping to connect emotion and action, and get the reader involved. And we’re going to see if Logan will break.

PC: Only that I having a fantastic time on this book. Issue #7 is a bit of a special issue as well. The big changes in Logan’s life happen at the end of #6, so watch out for that!

Paul Cornell writes the monthly adventures of Wolverine in his home title, with #3 arriving in stores from Marvel Comics next week. Check out a preview of that issue on Comicosity now!