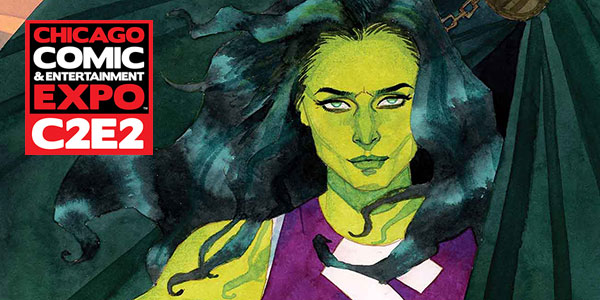 An avalanche of new books have arrived from Marvel Comics this spring, but a clear standout is the original gentle giant herself, She-Hulk. With attorney Charles Soule at the writing reins, Jennifer Walters gets to live her day-in-the-life as fans follow her through actual lawyering, super-heroing, and the well-deserved drinks that come between. Soule sat down with Comicosity toward the end of C2E2 weekend to share his enthusiasm for his character’s profession, his thoughts behind the support cast, and share a few spoilers for what’s to come! 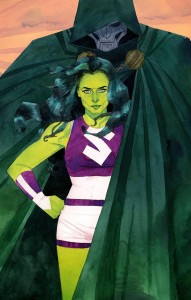 Matt Santori: Charles, thanks so much for taking time — twice in one weekend — to chat about one of your many, many books.

She-Hulk is, to my mind, one of the biggest critical successes of the All New Marvel Now launches. What made you excited to take on the character — other than the obvious, counselor?

Charles Soule: Ha! Right. Certainly, the lawyer aspect was a big deal for me — being able to write a book that utilizes my experience as an attorney in dramatic ways. Using it in a way that wasn’t just as a lawyer was appealing. So, turning it into something creative was great. Part of that is I’ve always felt that the lawyer side of myself was in conflict with the creative side of my life. I thought I could really bring something unique to it.

Other lawyers are writing comics — Marc Guggenheim, Marjorie Liu, a few others — but to my knowledge, this is the first legal focused comic that is written by an attorney. No lawyer has ever written Daredevil, for example. I thought that it might be neat to do that.

Javier Pulido was a big part of it too. His art is so spectacular and his storytelling so good that I wanted to work with him.

I also like She-Hulk. She’s just awesome. All of that put together!

MSG: Marvel has been releasing quite a few “day-in-the-life” type books since the success of Hawkeye, but She-Hulk really stands out for its unique point of view. What’s your take on She-Hulk’s personality that makes her stand apart?

CS: It’s hard to say. I think that one of the things that always has made She-Hulk stand out, no matter who is writing her, is that she’s a very optimistic character. She’s not full of angst. She’s not full of agitas about the fact that she’s a seven-foot tall green woman. She’s like, “This is kind of awesome! I love it!” And that’s different than the normal go-to take for a lot of super-heroes, to treat it like it’s a curse. And that if you treat it like it’s some awesome thing, there’s no drama to be found. It’s ruining the rest of their lives in some ways. 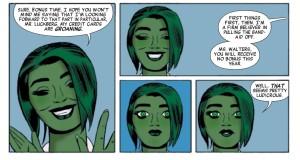 But with She-Hulk, you’re able to strike a great balance. She’s able to do amazing things, but at the same time, that means some of the challenges she’s facing are pretty intense. I think it’s her attitude about it that makes her stand out.

MSG: How does it feel to be able to take on a character where your background and education can be brought in so directly for narratives?

CS: Well, a lot of Jen’s cases are analogous to things I have done in my practice like, for instance, the son of Doctor Doom coming to the United States to seek asylum. That’s related to some of my practice work as an attorney. I do a bunch of different things, but one of them is immigration. Being able to bring that in is great.

Having the real life experience that I do, you’ve sort of researched cases or you’ve worked cases, and you kind of know the system well enough to find the drama in it. I know how lawyers talk, and how they act. I know what their offices are like. I just put it in the book. 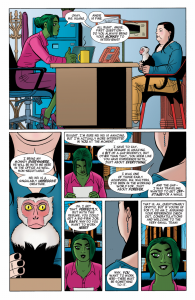 MSG: Every issue so far has been a joy to read, but I have to say the dialogue in issue #3 between Jennifer and Doom’s son is simply priceless. When you are crafting dialogue, what’s your method for coming up with the right voice or pacing to ensure it stays this sharp?

CS: That is one of the biggest writerly mysteries for me. There are lots of things I know how to do and have a process for. I know how to build an action sequence. I know how to structure a done-in-one story. Humor and wit, it just happens. I just have to pray that it keeps happening.

MSG: I have to say it. I am completely transfixed by Hei Hei, the office monkey, but Angie herself is quite the mystery as well. What was the inspiration behind that character, and will we be seeing her life explored a bit more?

CS: Absolutely! Angie Huang and her monkey Hei Hei are obviously Jen’s paralegal and… office pet, or whatever. There’s a lot going on with them, and they’re not exactly what they seem. That’s been made fairly obvious by this point, with the little hints behind the scenes. We won’t find out their whole deal until a little ways later in the series, because you’ve got to keep some mystery and all that.

I wanted to bring in a paralegal, because I think paralegals are so vital to legal practices. I was one, and the work is really hard. Why not have a cool one and celebrate it a little bit?

Also, I wanted to have a character who looks and feels a little different than a lot of other characters you might see in comics. Angie is a non-typical body mass-looking Asian woman. You don’t see that in comic books very often. And yet, she’s really good at her job, she’s funny — she’s got stuff going on. She’s gets it done. 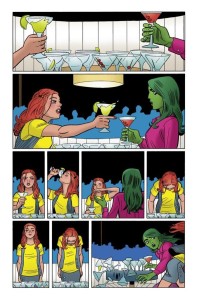 MSG: The addition of Hellcat to the cast really speaks in some ways to Jennifer’s most impulsive and somewhat insecure side. How do you balance this confidence in both characters and use that to play off each other?

CS: The point of Patsy Walker, in part, is because I like Hellcat. She’s awesome. But also, Jen is known for being a “Whatever. Let’s do it! Ha ha!” type of character. So, giving her a character who’s that way, but even more so, puts her in almost this weird mentor role. This is not something she’s particularly comfortable with. She’s somewhat impulsively taken responsibility for Patsy Walker, which may or may not work out well.

It’s a character dynamic that I felt would be interesting to let play out. I thought it would help them both grow and change a bit as characters, and you can get some really cool scenes out of it. They’re not always going to be pals. Characters like that are going to have arguments. It’s fun!

MSG: You mentioned Javier Pulido, who is visualizing both the outrageous and banal in really interesting ways for this series. How has your working relationship been and what do you think he is bringing to the book that’s different?

CS: I think Javier is just brilliant. You know, it’s a book about lawyering, which means conversations are going to be all over the place. Just talking heads pages. He’s able to take them and make them interesting every time. There’s definitely a lot of creative back and forth between us about how to make these pages work.

The book would not be what it is without Javier, no doubt about it. I think he’s due a lot of the credit for the book’s success and I’m thrilled to be working with him!

CS: So, in issue #4, Jen has gone to Latveria to rescue Doom’s son. Issue #5 and #6 deal with the overarching uber-story for the series — at least the first big chunk of it — which revolves around the blue file. We’ve seen that referred to a few times in the book so far.

After that, we get a really cool story in issue #7 with Hank Pym as a guest star. It’s super super fun. People grow. People shrink. It’s madcap.

In addition to his day job as an attorney, Charles Soule writes ongoing adventures of She-Hulk, Death of Wolverine, and Inhuman for Marvel Comics; Superman/Wonder Woman, Swamp Thing, and Red Lanterns for DC Comics, and Letter 44 for Oni Press. Is that all?